The Evergrande Case - The looming end to the success story of the Chinese housing market?

China
November 29, 2021
Since October 2021, the name “Evergrande” has made headlines around the globe. Real estate in China has been a driving factor for the country’s growth and with the second largest property developer, the Evergrande group, being close to defaulting on its bonds. It is not surprising that the whole world is closely watching the evolution of this story. If Evergrande defaults, China will most probably face a tough period ahead. But how long and how much it will cost them, we will still have to wait and see. 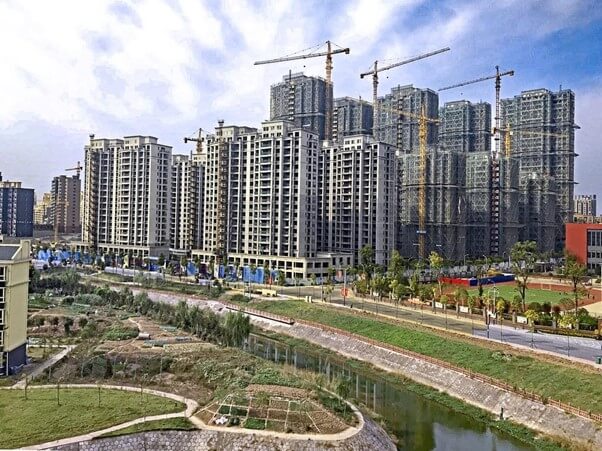 The Evergrande group and China

What is the Evergrande Group?
The Evergrande group was established in 1996 by Xu Jiayin. The story of Evergrande is just one of China's many rags-to-riches stories. In fact, the founder, who hailed from a poor family in Henan province, was crowned the richest billionaire in China by Forbes. Today, the Evergrande group has over 1300 projects that are spread across 280 cities in China according to their website. They have also expanded to other sectors such as sports, automobiles, and recreation since their creation.

It is important to note that Evergrande is part of China’s private property market. Regardless of Xu Jiayin’s connections with the Chinese Communist Party (CCP), they are not a state-led company. Since the Chinese state places more value in the state-led companies than the private sector. Although Evergrande occupies a large part of the real estate market, there has been speculation regarding the CCP’s involvement in this crisis - whether they are going to intervene or not.
The three red lines - the brakes to an indebting country or the start of a crisis?
About a year ago, the CCP came out with a policy in response to the pandemic’s pressure on the housing market. Housing prices have soared in major cities such as Shenzhen, Shanghai, and Beijing, making them almost as expensive as London. Even as the COVID-19 pandemic somewhat abated, demand was still pushing up the prices. It is not a secret that real estate means a lot in China, and represents 1,877.500 billion RMB of the country’s GDP as reported by CEIC in September 2021. Furthermore, it was 29% of their GDP in 2020. In short, we are talking about a significant sector of the Chinese economy.

The “three red lines'' are an allusion to the three targets the CCP wanted Chinese real estate firms to abide by: a liability-to-asset ratio of less than 70%, a net gearing ratio of less than 100% and a cash-to-short-term debt ratio of more than 1x. The reasoning behind these stringent rules was the steady development towards higher financial risk of the housing market since the shift of the century. In fact, if housing prices increase to unreasonable levels while incomes stagnate or demand suddenly decreases, there is a risk for a housing bubble. The CCP’s reaction was the “three red lines”-policy to stop the excessive borrowing many real estate firms had been up to in order to enlarge the supply of properties.
Why did Evergrande default on their bonds?
Without going into technicalities, Evergrande had indebted themselves throughout the years to expand their operations. This was possible due to lax regulations on the financial system before the “three red lines” in 2020. When the new policies came into effect, the company suddenly had to repay their loans to conform to regulations. Liquidity problems made it difficult to make payments on their loans whilst sustaining operations marred by slower yields than expected, leading to insolvency. They were thus unable to pay back their loans which resulted in a decreasing share price as well as the downgrading of their bond rating. Today, we are looking at a not so ever “grand(e)” firm that is on the verge of bankruptcy.

The real estate market in China

What does the real estate market look like in China?
China has one of the largest housing markets in the world. It started as a welfare-based system, as befitted China’s unique political system and goals. The housing market evolved to an entirely commercialised market as it went through three different structural phases since 1949: the pre-reform welfare housing sector (1949-1978), the dual-track housing reform (1978-1998) and the post-reform institutional development (since 1998). In the 21st century, the housing market has outpaced wages, generating a disparity between the cost of housing and income. Interestingly, China’s Gini coefficient (a tool used to measure income inequality) was at 38.5 back in 2016 and has decreased since the 2010’s. However, this decrease was not due to less income inequality but rather a cutback on skill premium as well as a decrease in inter-sectoral and geographical income disparities. Consequently, China is still dealing with income inequality. Moreover, owning a home seems to be important for societal status and well-being for the Chinese population.
What does it mean for the people in China?
It is not a secret that those who believed in Evergrande and had invested in the firm are going to be affected by this. But the story is more complicated than that. Evergrande employed 123,276 people in 2020 and many of these people will suffer the consequences if their firm collapses. Many were incentivised by the CEO to either help Evergrande survive by forgoing a bonus. Today, the company is one of the most indebted firms in China. Everyone from foreign investors, to home-buyers, to their own employees have demanded their money back while the world watches.

Only in China or should we worry too?

Is Evergrande the new Lehman Brothers?
The Chinese Central Bank broke their silence on Evergrande on October 15th. The response from an official was that the situation is manageable. They stated that the exposure to other financial institutions is not significant enough for the situation to get out of hand. Maybe this was their way of saying that Evergrande is ‘too big to fail’ like their American counterparts did in 2008.

Analysis from experts is divided on the matter. Some argue that if Evergrande goes bankrupt it will have effects not only on the Chinese economy but also globally. Whilst others are more sceptical over the comparisons with the Lehman Brothers during the 2008 financial crisis and today’s circumstances. But something to take into account is that the Chinese real estate market is still new and thus the data necessary to fully assess the exposure it might have on the world is not available.

The recent news is that Xu Jiayin had to cut his stake in Evergrande and injected a total of 1 billion dollars into the company to try to save it. The company has more than $300 billion in liabilities. The coming months will be interesting for the company to say the least. The Evergrande case shows that there might be more issues in the Chinese economy below the surface that threaten to impede their phenomenal growth in the future.

Some experts have used the Evergrande case to question China’s place in the world. Due to these fundamental issues China is, in reality, not an economic superpower apt to compete with the United States. The sole measure of GDP does not encompass other important aspects of an economic power and does not measure significant weaknesses. Other arguments state that since China has directed their focus to state companies with resources, it has hampered the private sector, which in turn will slow the Chinese economy. The state sector is not as successful as the private sector, yet the CCP continues to invest resources in it.

Evergrande is maybe not the last firm that will suffer the consequences of China’s attempts to reduce the private sector’s role in the economy. Observers may question how a successful real estate market can survive these major changes. Furthermore, if these new circumstances indicate structural weaknesses in the Chinese economy.
Maguette Fall
Maguette is studying her last year of a bachelor’s in development studies. On the side, she has been taking some economic courses out of curiosity. Her interest lies mainly in the unorthodox developmental path of the Asian Tigers as well as the Chinese economy.
The Lunar Times would like to invite you to a lecture hosted by our mother association EASA, with guest speaker, Stefan Brehm, on "Evergrande and China's Real Estate Bubble. Will it burst?"
Place and time: Café Athen (AF Castle), Dec 2nd, 18.30
Click on the picture for more information 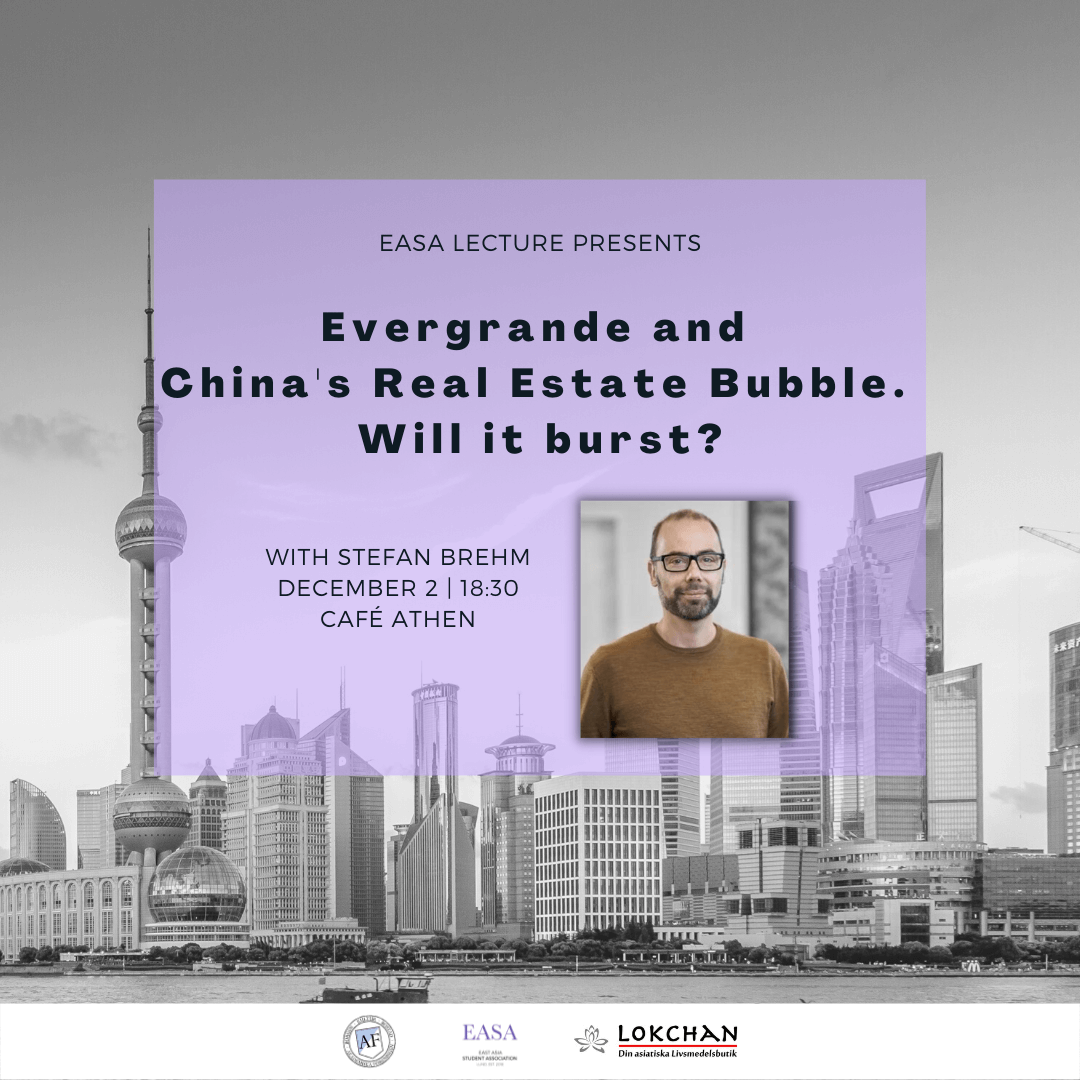