All quiet on the Eastern front - The North Korean Abduction Issue

Japan, North Korea
August 24, 2020
Few certainties, many unknowns. Over 40 years have passed since the first abduction, but little has been accomplished. As abductees’ families inexorably age, prospects for a settlement remain grim. 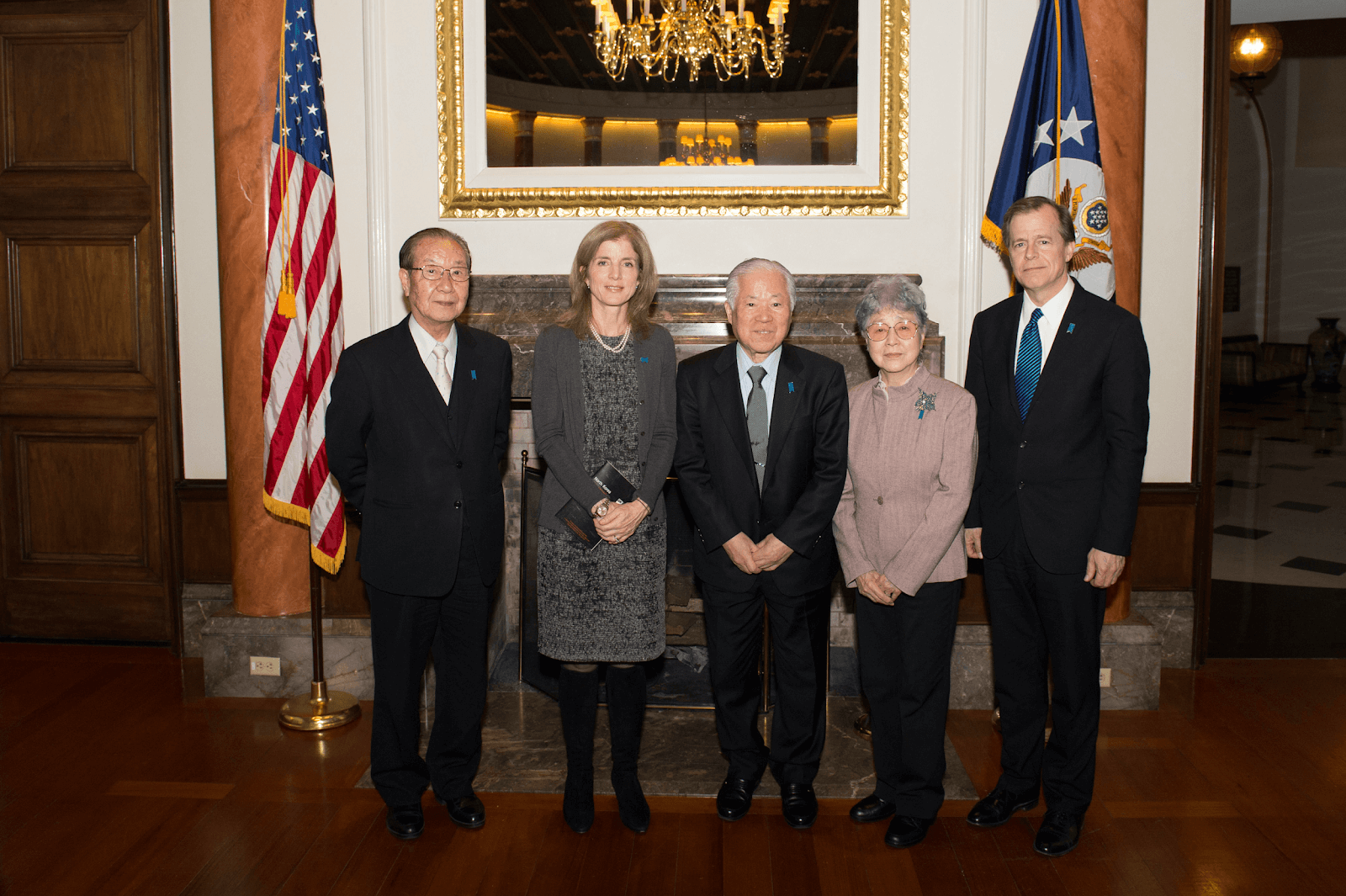 Yokota Shigeru and his wife Sakie meets the then US Ambassador to Japan Caroline Kennedy.
Source: State Department photo by William Ng / Public DomainEast Asia and Pacific Media Hub U.S. Department of State, via Wikimedia Commons
On June 8, while the international community was growingly concerned by North Korea’s threats, Japanese media were mourning the death of Shigeru Yokota, father of the abductee Megumi Yokota, kidnapped from her hometown of Niigata by North Korean agents in 1977. Mr. Yokota passed away at the age of 87 in a hospital in the city of Kawasaki, after strenuously campaigning for decades for the return of his daughter. In a press conference, Former Prime Minister Abe, who has always considered the abduction issues his own personal battle, expressed his personal regret for the loss and reiterated his cabinet’s commitment towards a solution. As of today, the Japanese government has identified 17 cases of abduction.

But what is this long-standing abduction issue about? In the late 1970s, several young Japanese individuals and couples disappeared under strange circumstances in the north-western and southern coasts of Japan. After several years, then again in the early 1980s some Japanese nationals vanished mysteriously while travelling or residing abroad, most notably Toru Ishioka and Kaoru Matsuki, during a trip to Madrid, Spain; and Keiko Arimoto, who went missing in Copenhagen, Denmark, during her study-abroad period in England. Journalist Masami Abe reported about the disappearance in July 1980 on the Sankei Shimbun, hinting at the possible involvement of foreign intelligence services, but was given little credit by public opinion. His findings were soon dismissed as speculation by the police.
However, in the mid ‘80s, two major breakthroughs occurred. In 1985, a North-Korean agent carrying the passport of Tadaaki Hara, who had disappeared from his home of Miyazaki in 1980, was arrested at his arrival at Narita Airport, Tokyo. Two years later, in 1987, the self-confessed North-Korean spy Kim Hyon-Hee, responsible for the crashing of a Korean Air flight 858 from Baghdad, Iraq, to Seoul, admitted she was trained as a spy in North-Korea and taught Japanese language by Yaeko Taguchi, abducted in 1980. Ms. Kim was first convicted, but later was given a presidential pardon by Korean president Roh Tae-Woo. Since then, she has been collaborating with the Korean government as a defector.
In early 1988, the abduction issue was raised at the Diet, the Japanese Parliament, for the first time but with little consequence. In 1990 LDP kingmaker Shin Kanemaru, one of the most influential political figures of that time, visited Pyongyang with a Japanese delegation together with Makoto Tanabe, head of the Japanese Socialist Party. This visit was off-the-record and bore no efficacious result.
Yet, the abduction issue started gaining increasing momentum on a grass-root level in the second half of the 1990s, as evidence of North-Korean involvement was mounting. In 1997, the Japanese government alluded for the first time to the possibility of Pyongyang’s involvement in the abduction. In the same year, Sukuukai, the National Association for the Rescue of Japanese kidnapped by North Korea, was established by the Yokotas, Shigeru and his wife Sakie, tirelessly opening seminars and rallies throughout the archipelago. Speculation was running that Japanese citizens had been kidnapped by North-Korean agents and used as language tutors.
The unceasing negotiation talks between Tokyo and Pyongyang culminated in the landmark September 2002 summit between the then-Japanese prime minister Jun’ichiro Koizumi and Kim Jong-Il, father of the current leader Kim Jong-Un. During the summit, held in Pyongyang, Kim admitted his country’s responsibility in the abductions and pledged it would never happen again. Among the 13 Japanese citizens recognized as having been kidnapped, Kim affirmed four were alive, eight were dead (including Megumi Yokota and Yaeko Taguchi, who the spy Kim Hyon Hee claimed was still alive), and one had never entered the country. A further détente in bilateral relations was achieved when five abductees- including Hitomi Soga, absent from the list presented by Koizumi- returned to Japan five months later.
After a second summit in 2004, five of the abductees’ family members returned to Japan. The discussion between Koizumi and Kim touched upon the subject of denuclearization only marginally. The return of the abductees is still, to this day, considered the greatest success of Koizumi’s foreign policy, one of the few times Japan was able to dribble the United States in matters of foreign policy. On the other hand, it marked the beginning of a never-ending stalemate.

After the successes of the early 2000s, discussions between the counterparts have now reached an impasse. Tokyo has repeatedly stated that explanations over the death of the abductees are dubious, to say the least. Forensic evidence has shown that the alleged remains of Megumi Yokota North Korea handed over to Japan do not match with known DNA samples, provoking public outcry in the country. However, in 2014, the two countries reached an agreement after consultations held in Stockholm. North Korea pledged to conduct thorough investigation over the abductions, in exchange of a partial of the unilateral sanctions imposed by Japan. In the same year, a meeting between the Yokotas and their granddaughter, Kim Eun Gyon, Megumi’s daughter, in Ulaanbaatar, Mongolia, inspired cautious optimism towards a resolution of the issue.
Former prime minister Abe built his whole political career on a hard stance towards North Korea. As part of his pro-US orientation, Mr. Abe has woven a close relationship with American president Donald J. Trump, first state-guest in the new Reiwa era started in May 2019. Arguably Trump’s best ally among foreign leaders, Abe has repeatedly asked Trump to put the abduction issues at the centre of his North-Korean agenda. The US president mentioned the issue in his first speech in front of the United Nations General Assembly (UNGA) in 2017 and personally met with the families of abductees during his first visit to Japan. Despite high hopes of the families, negotiations are now at a standstill. 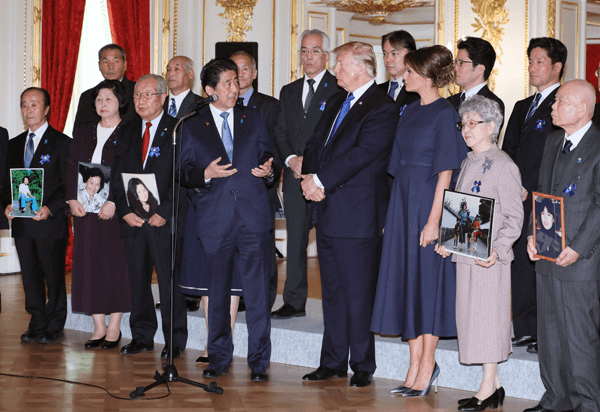 US President Donald Trump meets the abductees’ families on its state visit to Japan.
Source: 内閣官房内閣広報室, CC BY 4.0, via Wikimedia Commons

For years, the Japanese political field has been divided into advocates of a hard stance, who aim at tightening the sanctions until the issue is solved, and supporter of a softer stance who tilt towards a normalization of bilateral relations.
With the death of Mr. Yokota and Kiyoko Arimoto, mother of the abductee Keiko Arimoto, who passed away last February, another important issue has surfaced: abductees’ families are aging rapidly. Realistically, there are few possibilities of family reunification, since bilateral negotiations have not resumed in the last few years.
Japan has attempted to raise worldwide awareness on the issue and garner international support. Has this strategy proved effective thus far? Doubts arise when considering that more than four decades have passed since the first abduction. With North Korea, Japan- just like the whole international community- faces a conundrum: using the carrot or the stick? As tensions in the region are increasingly growing, we will probably hear more soon.