China, South Korea
August 24, 2020
Passionate, internet savvy and powered by a strong political conscience: these are Kpop stans, the young fans of Korean pop music who recently made headlines for their political activism. Armed with a keyboard and backed up by a powerful network, Kpop stans are engaging with current political and social issues through a fervent online activity. But who really are these new political militants? 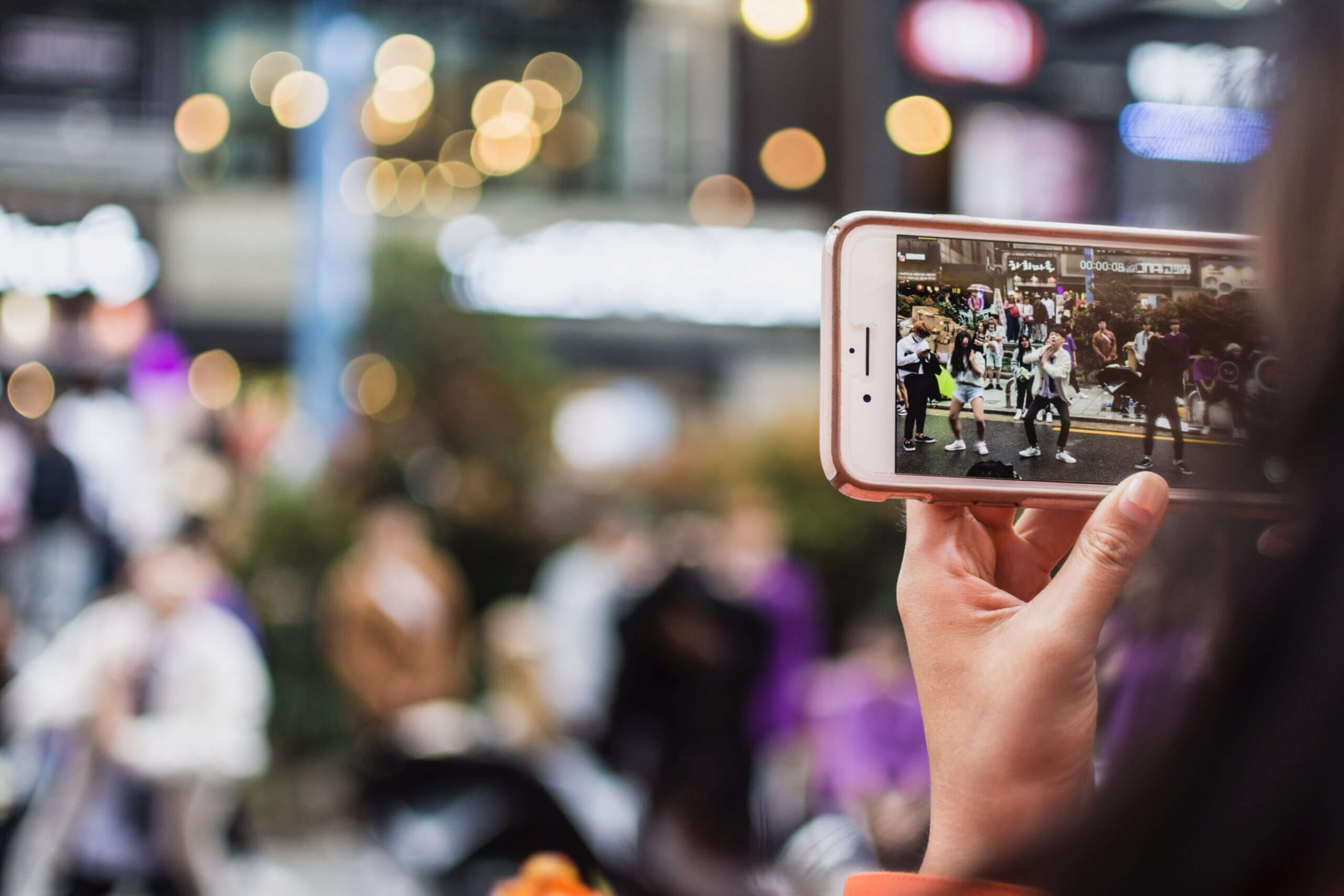 Girl filming K-pop busker dancers in Hongdae, the lively neighbourhood of Seoul known for its night life and for being a paradise shopping, especially for those fans of Korean pop music and cute gadgets.
Source: Jana Sabeth on Unsplash.
In stark contrast with the buoyant image of Korean pop music, where playful lyrics, pretty looks and jaw-dropping dances are the masters; in recent times Kpop international fans have proven to be far from the superficiality this music genre is often accused of, by dabbling in online political activism. In fact, Kpop is involuntarily raising a new generation of political militants, fiery and digitally savvy, who are embracing current political and social causes through a vigorous online activity.
The most recent as well as emblematic case is the one of the North American community of Kpop fans, which last June has drawn the attention of the international media outlets for its massive engagement in the Black Lives Matter (BLM) movement. The American fandom has banded together to rise against police violence and institutional racism and used their social media accounts to spread news and victims’ accounts, while also taking part in the protest through several online campaigns. Most notably, Kpop fans have hijacked the anti-BLM hashtags such as #WhiteLivesMatter, #BlueLivesMatter, and #WhiteOutTuesday, by posting thousands of memes and videos of Kpop idols to hush the opposing voices and give them less visibility.
Kpop stans have also succeeded to sabotage the highly-anticipated Tulsa rally for Trump’s 2020 presidential re-election campaign, by inflating the attendance through a “no-show operation” organised on TikTok and Twitter. They invited the fellow fans to reserve the rally’s tickets with the clear intention of not attending the meeting. And this resulted in a great success, as five days before the event Trump’s presidential campaign manager estimated a crowd of more than 1 Million people attending the Tulsa rally, whilst on the 20th of June only 6200 were actually reported to have attended the event.

KPOP STANS: WHO THEY ARE AND WHAT THEY WANT

‘Kpop stan’ is a term that, according to Urban Dictionary, refers to “a person who has a slight obsession with Kpop and will reference it at any time anywhere”. Although correct, such description is not exhaustive: in recent times, the fandom has indeed evolved from mere devotees of Korean idols to budding political activists, channeling the same passion and enthusiasm typically employed to help their favourite singers topping the music charts to address current political and social issues. Kpop stans are rising as a new political force, as young defenders of justice armed with a keyboard and backed up by a powerful network of passionate fellow fans.
It is important, however, to point out how the online activism performed by Kpop stans can take the most various forms, analogue or at times contrasting to the kind of political activism taking place in the US. In this regard, it is necessary to take into consideration the global reach of this social movement, as Kpop fandoms are not confined to specific geographical borders and, consequently, their activities are not limited to a specific social and political context. Therefore, instead of considering Kpop stans as a uniform group of fans, one should rather analyze such a community as a conglomerate of people of very different backgrounds; bearing in mind their specific geographical and social context.
Along these lines, in order to understand, for instance, how and why the BLM movement gained such resonance among the Kpop fans in North America, it is indispensable to look at the American fandom itself. In this respect, very interesting is the tweet of Michelle Cho (researcher and professor at the University of Toronto specialised in Korean pop culture), in which the scholar brilliantly epitomizes the Kpop community as predominately composed by people of colour, “significantly queer and extremely online”.
On one side, this description clearly shows how the belonging to racial and cultural minorities influences the political stance of these fans, thus justifying their awareness and sensitivity towards the related issues. On the other side, it also shows how North American Kpop stans embody the tenacity and the determination of the digitally literate youngest generations to fight for social changes and equal rights, fully representing a much wider phenomenon that during the past few years has primarily taken over Western countries and is leading thousands of young people to voice their will for change, both online and offline – the Friday for Future movement being one prime example. The North American fandom likewise proves to be critical to the existing institutions and the ruling government, as evidenced by the above-mentioned boycott of Tulsa rally.
Overt political opposition was likewise voiced in Chile, where the Ministry of the Interior accused Kpop stans of fueling the protests which took place in the Latin American country between October 2019 and March 2020. According to the report, the fans engaged in an intense online activity which raised awareness of the violation of human rights at the hands of the Chilean government and armed forces, as well as criticized the silence of media and the censorship of social networks. A piece of news that not only impresses the audience for reporting the first case of governmental recognition of Kpop stans’ militancy, but that also shows how effective and influential the political activity of this community can become.
However, criticism and opposition among American fans shall not be mistaken as a distinctive trait of Kpop stans’ political activity in general. As a matter of fact, in China, we observe a diametrically opposed phenomenon, where the local fandom turns out to be a precious ally of Beijing. In the past few months, the Chinese Kpop stans have indeed flooded social networks of messages, slogans and hashtags going against Hong Kong’s pro-democracy movement, acting as passionate partisans of the “One-China policy”. For instance, the Chinese fans took up the cudgels for the Chinese Kpop idols who voiced their support to the Chinese government on their official social media, attacked by the Western community and the pro-Hong Kong activists. Kpop stans also strongly criticized the Korean singer Choi Siwon for liking a tweet about the pro-democracy demonstrations in Hong Kong, pushing the star to public apologies.
As explained by the sociologist and specialist of contemporary China Lun Zhang, these young fans are powered by a strong nationalist sentiment “which finds its roots in the collapse of the Great Empire and the numerous humiliations at the hands of the Western powers”, leading them to act as proud defenders of the Chinese nation, and consequently of the Chinese regime. It is also interesting to note that if on one side the Chinese kpop stans differ from the Western counterpart in their expressed nationalism (the only guiding force of their political activism); on the other side they share the same mode of action in their online activity, giving further evidence of how the Kpop community is based on a strong and united network of passionate fans.

A MOVEMENT WITHOUT PRECEDENTS?

Yet, the rise of Kpop stans in the global political scene shall not surprise the observer.
First of all, music has always been a powerful medium, often holding a political power capable of inspiring and empowering its audience. And it is not the first time that history records a political movement which springs from a music genre: chief among them is the punk movement, first emerged in the late 70s and which inspired the youth to rise against classism, racism and all-kinds of inequalities.
Secondly, one must not mistake Kpop’s lack of political involvement with a lack of political insight of its fans. Although it is undeniable that Kpop lyrics tend to be pretty shallow and Kpop stars are famous for remaining silent in the face of both national and international issues; Korean music is still (incidentally) responsible for the rising political activism of its young followers.
As rightly pointed out by the scholar CedarBough T. Saeji in her analysis of the North American community, Kpop stans are more likely to be progressive due to a common open-mindedness that allows them to approach and appreciate such a distant and different culture like the Korean one. Accordingly, Kpop stans tend to be receptive and sensitive towards political and social issues not only for their fundamental open-mindedness, but also thanks to their exposure to Kpop and consequently to the international community.
The passion for Korean music, in fact, not only brings its fans to a significant cultural enrichment and understanding of the Korean reality, but also enables them to get engaged in a global and diverse community of fans where the exchange of ideas, opinions and information is commonplace. Therefore, Kpop stands out as a new source of political empowerment not for the message carried out in its songs, but for its globalized nature. And it is likewise important to recognize that before being fans of a specific music genre, Kpop stans are the mirror of the society they live in.
Ultimately, is Kpop activism a movement without precedents? History shows that no, Kpop stans as a subculture did not pave the way to political activism linked to music interest. However, it is fair to recognize the unique features that inadvertently made Kpop a musical phenomenon able to inspire the political conscience of its audience.