The contradictions of Songdo IBD

South Korea
August 23, 2020
Songdo International Business District is praised as a state-of-the art business hub and smart city project, equipped with the latest data technology and high sustainability standards. Skyrocketing buildings and aesthetically landscaped parks invite you to believe you are walking on the streets of the next urban utopia. But does Songdo really stand for a better, brighter and greener future? 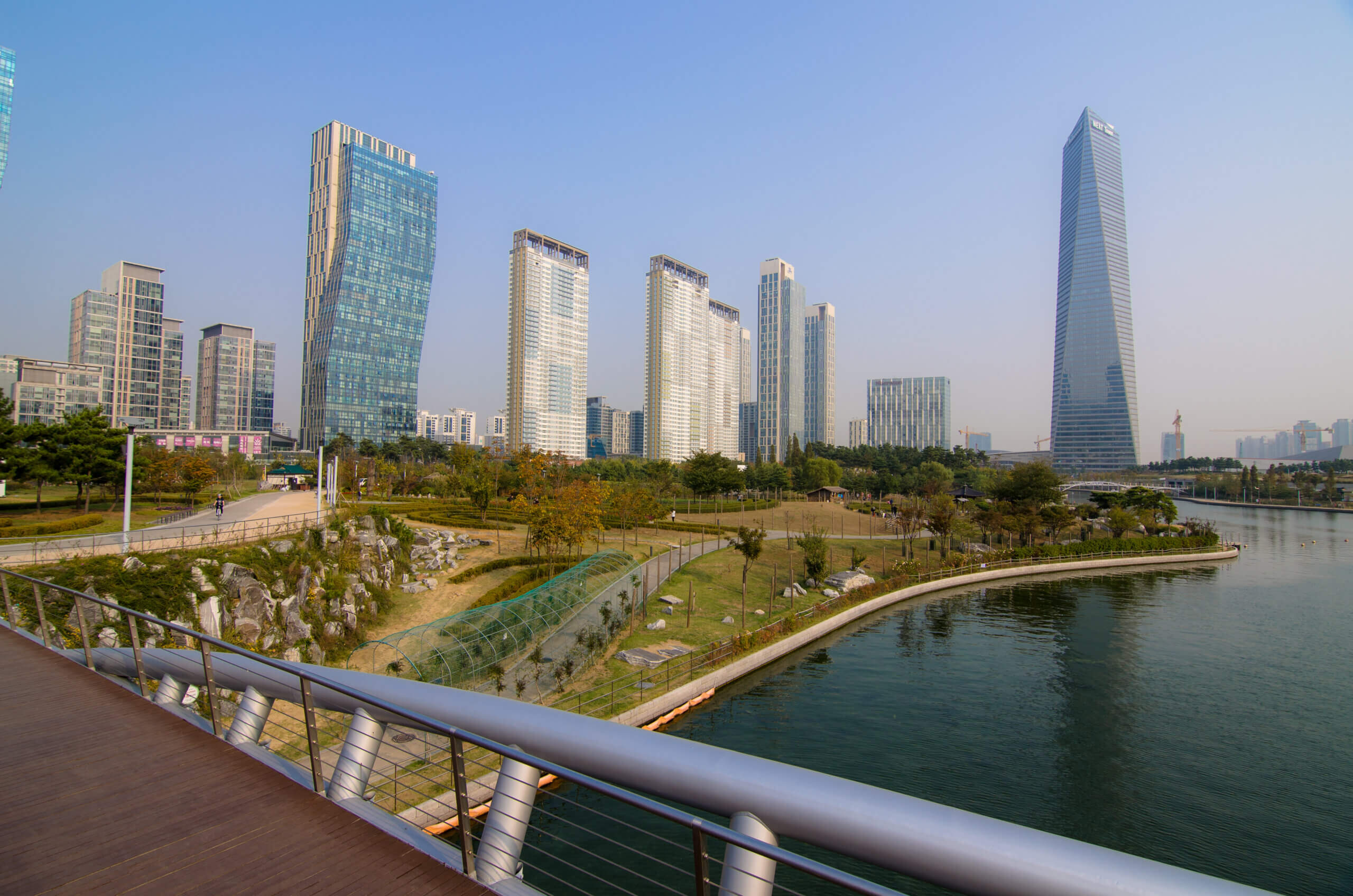 View over Songdo IBD. Source: Matthias Walach.
Right before a friend boarded his plane to visit me in Seoul in early fall 2016, he sent me one last text: ‘When I come to visit you, we must go to Songdo Business District!’ Slightly puzzled about his excitement about this ‘Songdo’ place neither my South Korean acquaintances nor I had ever heard about, I turned to the Internet for quick help: “Songdo International Business District (Songdo IBD) is a smart or ‘ubiquitous’ city that was built on reclaimed land masses along Incheon’s coast, approximately 35km away from Seoul…”
Luckily, I stopped reading more beforehand. This way, when I found myself stepping off the train one week later, I was able to explore Songdo with almost zero expectations. A few glimpses of the shiny and modern urban architecture and its wide pedestrian-friendly streets were sufficient to make me believe I was starring in some kind of utopia-come-true movie. In fact, no matter what you envision when hearing the blurry term ‘smart city’, Songdo can hardly disappoint you.

Songdo IBD – a smart utopia of ‘life, work and play’

With a generous budget of $40 billion, the construction of Songdo IBD kicked off in the early 2000’s, based on a tight master plan negotiated by few carefully selected South Korean and international stakeholders. As a key anchor district of the Incheon Free Economic Zone it was designed as an eco-friendly business, settlement and research hub on an area covering roughly 600 hectares.
Without doubt, its strategic location, allowing you to reach one third of the global population within less than 4 hours, and attractive fiscal benefits make it an ideal show stage for global business activities. At the same time, with a plethora of recreational and educational offerings, strict sustainability regulations and green urban design its creators aimed to compensate for the social and environmental ills caused by modern urban life. All of this is powered by the latest sensor and data technology.
But there is this thing about utopias. You might get this cringy, sceptical feeling of ‘This is too good to be true.’ Once diving into the details behind Songdo’s construction, you might discover that Songdo is in fact a living contradiction. Some of these contradictions are simply nice-to-know facts, while others will most likely reinforce your scepticism even more.

Songdo IBD is praised for several ‘firsts’, reaching from first sustainable city in the world, first LEED-certified city in South Korea or first master-planned ‘sustainable eco-city’ that serves as a business hub. To pick up the previously mentioned term ‘ubiquitous city’, Songdo was further declared the first larger urban project to realize the U-city concept, in which data gathered from omnipresent computers in residential, recreational, culture and business areas are shared in real-time. Certain smart technology or architectural components, however, have been 'recycled' by drawing on already proven structures as a source of inspiration such as New York’s Central Park, the Canals of Venice or Sydney’s Opera House.

Wide avenues and pedestrian walks, an efficient public transport system and massive green areas which make up 40% of the total area allow for a convenient getting-around and an escape from the capital’s busy ‘pali-pali’ culture. Recreational and cultural offers such as the Arts Center, Lotte Mall or Jack Nicklaus Golf Club serve to foster the sense of community among residents. At the same time, the far stretched, clean architecture and an unexpectedly small population let public areas seem almost lifeless. While such calmness might be attractive to families or the elderly, younger generations have shown to prefer living in more vibrant cities such as Incheon or Seoul and commute to Songdo IBD for work. One might wonder if Songdo faces the risk of becoming a ghost town instead of turning into a vibrant community.

Built to serve as a profitable global business hub, the district is designed to attract foreign investors and residents, including overseas Korean who seek to return to their roots. The opening of international schools is just one exemplary means to support this goal. On the other side of the table sit South Koreans who claim to be disadvantaged in job search compared to international applicants, or who miss typical aspects of South Korean daily life such as street food stands and markets. With an unexpectedly large local population, city planners might want to adjust to attend the demands of these residence groups – especially when the number of both foreign corporates and individuals lacks way behind the forecasts.

A high concentration on LEED-certified projects, focus on energy efficiency and clean power sources, a centralized pneumatic waste system collecting trash underground before it is sorted and recycled or incentives to avoid individual motorized traffic - all of these measures help to create a resource-saving system. Still, we should not forget that such technologies are a double-edged sword: New ‘sustainable’ technologies often function on high energy use and their production requires sourcing rare earth materials. The difficulty to recycle the components of smart devices further boosts the accumulation of e-waste. Then, since the city foots on reclaimed land of Incheon’s waterfront, constructing Songdo wouldn't have been possible without ecological destruction and displacement of local farming. This surely makes Songdo's sustainability a matter of perspective.

While environmental, social or philanthropic related praise often dominates the discourse on smart cities such as Songdo IBD, its enormous business potential is easily forgotten: The idea for Songdo originated while a desperate South Korean government was fighting the aftermath of the Asian Financial Crisis and was searching for new economic growth engines – and while being pressured by the rise of an economically powerful China. Considering the fact that Songdo is realized with high capital involvement from the US-American real estate sector, chaebol-type South Korean corporates and a post-developmentalist government, the impression that Songdo is in fact nothing but a capitalist project is further reinforced. Additionally, hopes are high that Songdo becomes an exportable success model: With ‘Smart City as a Service’ (SCaaS) South Korean urban planners aspire to become high-on-demand actors in a new lucrative industry.

The exploration of Big Data and Internet-of-Things technologies offers high improvements for individual comfort and security in urban spheres. Residents can easily pre-heat their homes while being in town, watch their children play from afar via surveillance cameras or receive traffic or accident warnings on their phones. This on the other hand raises issues of digital responsibility such as data privacy, data storage and public availability. Further, Songdo is surely not the place-to-be for everyone since less digitally literate individuals might become excluded from reaping the benefits of technology. Lastly, one might wonder how the need to continuosly use digital devices to be able to live in Songdo will affect common health concerns in modern South Korea such as high levels of smart phone dependency and the physical effects connected to it.
These contradictions, which are by no means all you will find, reveal that there is no need to uncritically romanticize urban projects such as Songdo IBD, no matter how tempting it may be. Being initially intrigued by a friend’s excitement and blinded by the first impressions during a short visit, it took me several rounds of deeper engagement to grasp at least the cornerstones of what this urban mega project is about. But then again, don't the contradictions Songdo IBD raises paint it even more fascinating, by providing endless learning opportunities for involved stakeholders and better future enthusiasts? Should we maybe look at it as a living laboratory and base for discussing how we want to live in the cities of tomorrow?