Household debt in South Korea: Should it be taken seriously?

South Korea
November 23, 2020
Today, South Korea has one of the highest household debt burdens in the world with regard to its economic size. With income growth lagging behind the increase in debt, the debt-to-disposable income ratio is even at its highest since it began being recorded in 2007. The Korean government is now facing growing household debt in combination with an uncertain housing market. A question thus arises: what could this mean in the light of the current COVID-19 pandemic? 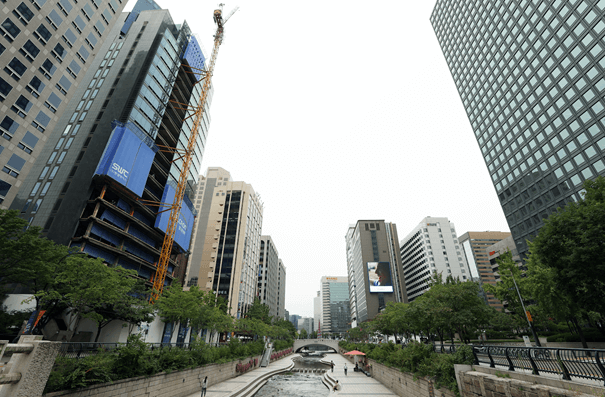 Picture of Seoul in South Korea.
Source: Jeon Han for Republic of Korea, "Cheonggyechen_Stream_20200917_02", 17th of September 2020, on  Flickr.com.
When mentioning South Korea today, many might associate the country with the worldwide famous k-pop boy band, BTS. Since Hallyu, or the Korean wave, washed over the world, South Korea has set itself on the world map. The image we get of Korea is a sugar-coated one. However, the Oscar Award winning movie ‘Parasite’ has shown a ‘darker side’ of the country. In the movie, the message is clear: inequality is growing in the country. In fact, South Korea’s household debt is one of the highest in the world relative to GDP. To the outside world, South Korea is a rich country, but more and more households are suffering from increasing debt, which drives inequality further.

Household debt in South Korea is nothing recent: it has origins stretching back to the Asian Financial Crisis of 1997. The outcome of the crisis was a shift of focus from financial institutions onto lending to households. This, in combination with the creation of artificial low interest rates that generated a broad creation of credit as well as an active encouragement from the government toward credit card use, led household debt to grow. Not only that—soon the country was hit by a credit card bubble burst in 2003, which brought about a bleak period in South Korea. A large number of people fell into bankruptcy and many debtors were tormented by bankruptcy shame, harassment from creditors, and the like. The severity was such that suicides—and even murders—linked to bankruptcy were on the rise.
Prior to the Global Financial Crisis, the government did not take measures strong enough to lower the increasing household debt. Post-crisis, the government decided to target a “soft landing” for household debt in 2011. It had been planning on creating more regulations for the non-banking household loan activities, which, by 2012, had become a big sector for loans. In addition to that, the government also set in place funds, such as the National Happiness Fund in 2013, to help debtors cope with bankruptcy and service their debts.

the Economic dangers of household debt

Just as household debt is not recent in South Korea, neither is it peculiar to the country. It is a worldwide phenomenon that is becoming increasingly dangerous for national economies. On the one hand, household debt can be something ‘positive’ in the short-run, as it can help credit-restricted households to consume more and therefore have a positive effect on economic growth for a country. On the other hand, according to one Bank of International Settlements working paper, if a country’s household debt-to-GDP ratio exceeds a threshold of 60 percent—along with other characteristics such as high degree of legal protection for creditors and low financial development of the country—the impact in the long run can be negative.
Recently, it has been demonstrated that for South Korea, household debt is one of the central elements underlying both short- and long-term price dynamics in housing. Hence, a sharp rise or decline in household debt can affect housing prices as well as be a risk to the financial stability of the country. In March 2020, the Monetary Policy Report of the Bank of Korea reported that there was an increase in housing purchases and leasehold deposit prices, thus driving up housing prices across the country.

By the time Bong Joon-Ho’s “Parasite” came out in 2019, South Korea was known worldwide for its k-dramas and k-pop. Often, in k-dramas, the main male character is depicted to be a young, rich and attractive son to a big enterprise. Oligarchic chaebols, which are large, family-run, South Korean industrial conglomerates, are often at the centre of the storyline. The female lead, often poor, is invited into the world of the more well-off. One could think that k-dramas almost idealise inequality. Even though inequality is taken up in k-dramas, however, its reality is only superficially shown.
In contrast to the picture painted by these wildly popular series, what “Parasite” illustrated was a more reality-based portrayal of South Korea regarding rising inequality in the country. As rising household debt started to grow steadily after the Asian Financial Crisis, so did inequality. Addressing the wealth gap has been the focus of the government. When the current president, Moon Jae-in entered his presidency, he promised to reduce the gap by raising the minimum wage as well as suppressing housing prices. But, it seems that only history will tell if Moon can keep his promises.

In the context of COVID-19, the fact that increasing household debt is correlated with lower output growth, higher unemployment, and a greater risk for future banking crises (according to recent findings) is something that can perhaps be exacerbated by the pandemic. For now, the COVID-19 pandemic is still ongoing and the full consequences are yet to be seen. According to the recent IMF global financial stability report, there is a consensus that in light of the pandemic, economies will face “cracks” in the global financial system. In fact, it has already been shown that financial systems stability in South Korea has been decreasing.
In October 2020, the financial minister of South Korea, Hong Nam-ki, lost his home due to his own housing policy that had the ambition to protect tenants and delay deposit increases. The Housing Lease Protection Act has made it possible for tenants to extend their contracts for longer than the standard two-year contracts allow (if the landlords don’t decide to move into the property). Moreover, it also limited the increase of “jeonse” deposits—lump-sum returnable deposits that are paid instead of monthly rent—to 5 percent. As a result, the amount of jeonse housing was reduced, which is a problem as this type of housing has been popular in South Korea. Ahead of the implementation of the act in July 2020, landlords emptied properties in order to increase deposits for new tenants.
It is no secret that the South Korean housing market is bubble-prone. The government, in the context of the pandemic, is mainly focusing on the creation of jobs and activating investments. The housing market, however, has become more of a problem as well during the pandemic. According to a UNHCR report, the response to the COVID-19 situation should include the aspect of housing as it can have negative effects on the spike of evictions, hunger, homelessness, mortality and overall suffering of marginalised groups in society. In relation to this, the household debt repayment burden is increasing in South Korea—with COVID-19 it may even be further worsened.
In the end, the issue of household debt is both long-standing and ongoing in South Korea. In light of the ongoing COVID-19 situation and South Korea’s new housing policy, household debt may pose new challenges for the South Korean government. As inequality is a big issue in South Korea, there is a strong likelihood that some may suffer more than others throughout this uncertain period in history. Will South Korea manage to get through this?
maguette fall
Maguette is a second-year student in the Development Studies program. She is also taking some economic courses on the side. Her interest lies in, among other things, the unorthodox developmental path of the Asian Tigers and China.