Keeping up with the Kims

The survival of a totalitarian regime through the personalization of power

North Korea
December 21, 2020
The Democratic Republic of Korea is a relatively obscure country that little reveals itself to the external world. Despite that, the international community yet succeeds in finding comedy in the imaginative ideology and in the extravagant laws regulating the country, often disregarding the incredible survivability of a regime that has been withstanding for over 70 years. A question thus needs to be begged: where does lay the success of the Kim dynasty and their dictatorial state? 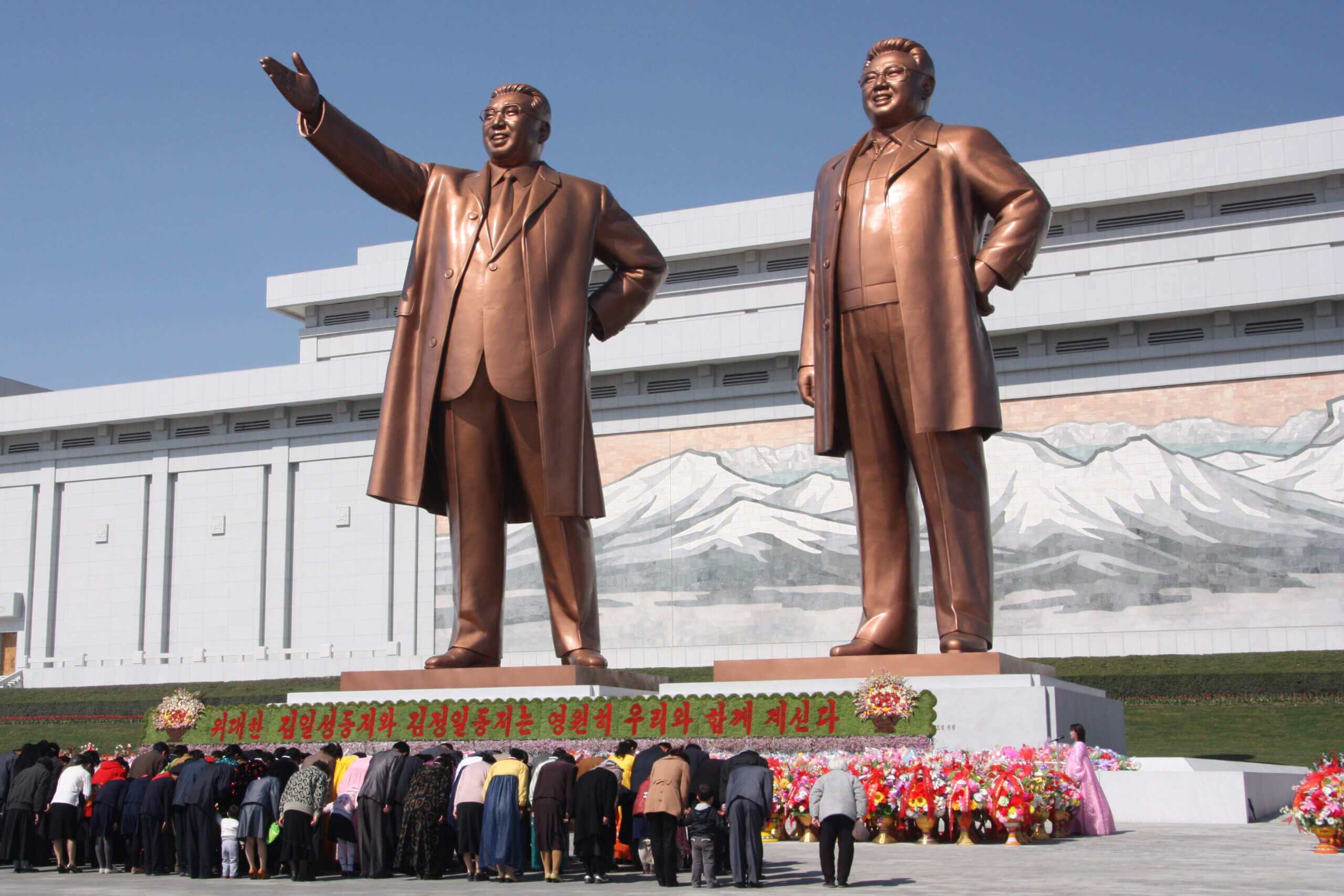 North Korean citizens bowing to The Grand Monument on Mansu Hill in Pyongyang.
Source: J.A. de Roo - Own work, CC BY-SA 3.0, via Wikimedia Commons.
Obsolete communism, bizarre ideology, crazy dictators.
These are the common judgements that the average commentators use to describe the isolated and relatively obscure country that is the Democratic People’s Republic of Korea.
Commonly reduced to a laughing stock, what is rarely pointed out is the regime’s incredible resilience and survivability across the years, despite the adopted form of isolation and the multiple internal and external forces that have been threatening its endurance ever since the rise to power of the Great Leader Kim Il-Sung.
In order to understand how the North Korean regime could endure the domestic and external crisis, it is, however, necessary to understand the steady and vigorous system on which the country relies. And in order to understand the system, it is imperative to understand the architects of this efficient political engine: the Kim leaders. Thus, let us embark on a journey that will clarify the political tools that allowed the Kim dynasty to exercise power over North Korea for over seventy years, hopefully shedding light on the aura of mystery surrounding the North Korean regime.

“Come out stronger than before”: the Juche political ideology

The 1990s was an exemplary decade for the DPRK and world politics in many respects: the fall of the Berlin Wall put an end to the Cold War, and the demise of the Soviet Union raised new questions concerning the future of the remaining communist regimes. On top of that, North Korea had to face the two biggest domestic hardships since the end of the Korean War: a devastating famine that eroded the country’s capacity and killed hundreds of thousands of people; and the death on the 8th of July 1994 of The Great Leader Kim Il Sung, the beloved founding father of the DPRK. Despite the plausible predictions of imminent collapse, with the ascension to power of his son — Kim Jong Il — the North Korean state went to meet a new political era and re-evaluation of its regime’s nature, with the consolidation of the state power in the hands of a singular ruling family.
One can debate that ideology played a crucial role in the establishment of Kim’s power in North Korea, a position which can reasonably be endorsed. It is indeed acknowledged that ideology can be an incredibly useful tool to support an authoritarian leader in his effort to legitimacy and power maintenance and, to this regard, is emblematic the framing of the “Arduous March” as an ideological motive to justify Kim’s regime and activity.
The “Arduous March” is an iconic record that involves Kim Il-Sung and his guerrilla in Manchuria during the winter of 1938 and 1939, as they were hounded by a Japanese expeditionary force. The strength of mind and the courage that granted the survival of the Great Leader and his fellow fighters were thus used by the government as the emblems of the North Korean self-resilience and revolutionary spirit, calling its people to both sacrifice themselves and endure during difficult times. And it is right through the retelling of the “Arduous March” that Kim Il-Sung could consolidate his power during the Great Fatherland Liberation War and the post-war construction period, summoning his people to sacrifice themselves for the country on behalf of North Korean grit and self-reliance. Kim Jong-Il likewise adopted the “Arduous March” as an ideological motive to inspire the population during the 1990s famine, framing an ideological parallelism between the Great Leader’s iconic hardships and the current popular distress.
Other than sustaining Kim Il-Sung's political action and preventing popular uprisings during times of crisis, ideology was also fundamental to legitimize Kim Jong-Il’s succession. The transfer of power from father to son was indeed justified by the composition of an ideological narrative that sees the Great Leader Kim Il-Sung appointing his descendant by gifting Jong-Il with a pistol, a symbol par excellence of the revolutionary spirit and the struggle for national independence. This constituted a very powerful narrative that ideologically creates a blood tie that unites the leaders in the fight against imperialist powers, one of the cornerstones of the state’s ideology.
The The aforementioned narratives are just two of many that could illustrate 주체 Juche, the national ideology of North Korea, which can be epitomized through its pronounced xenophobia, the Kims’ cult of personality, and a strong nationalism. 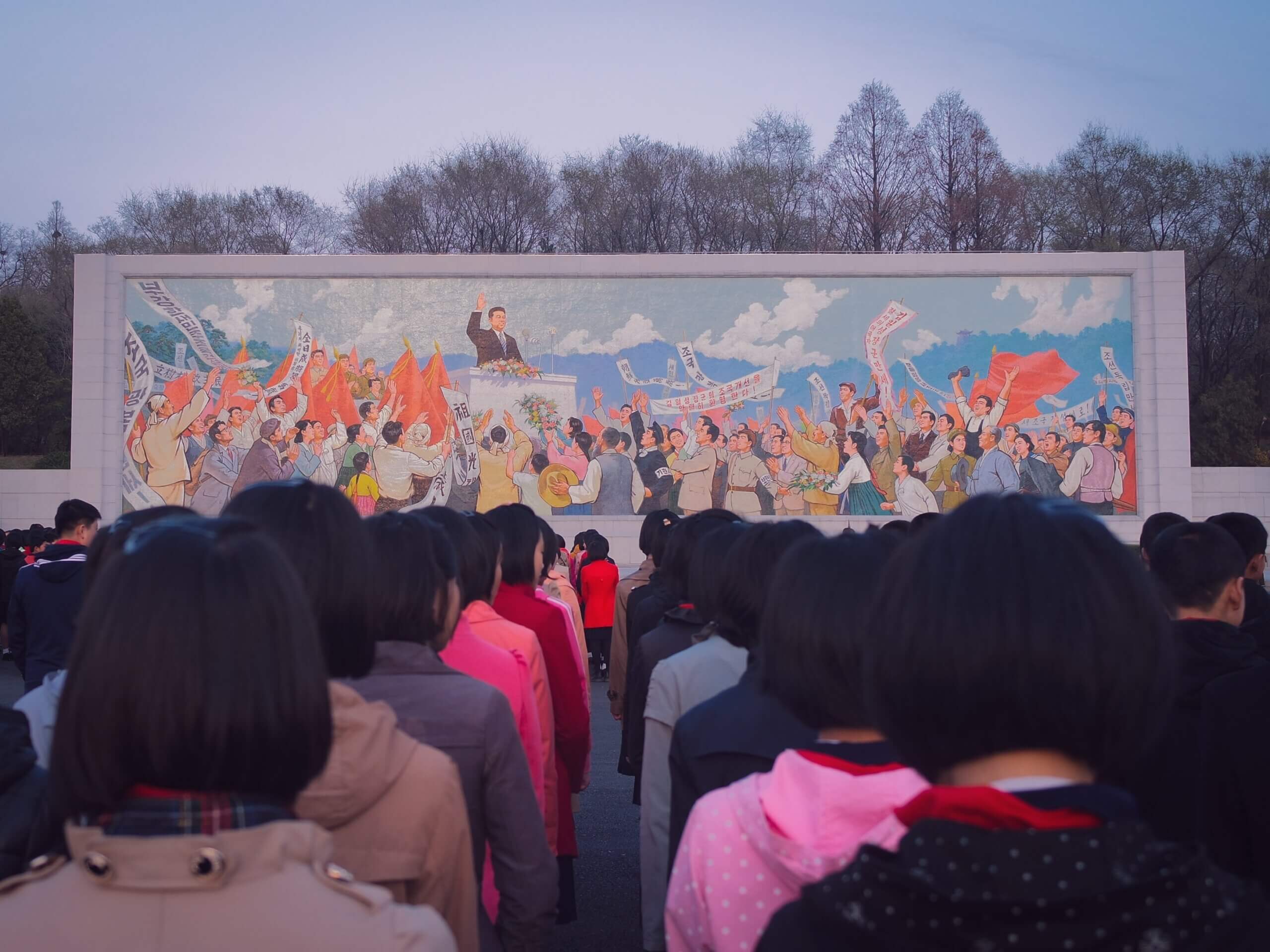 Children lining up in front of a mural in Pyongyang.
Source: Thomas Evans on Unsplash.

“Prevention is better than cure”: the songbun caste system

However powerful, ideological rhetoric cannot be the only tool through which an authoritarian leader can forge its legitimacy and political rule in the long term. As a matter of fact, as proved by the North Korean defectors’ accounts, ideological disenchantment is starting to spread. With the recent leakage of information from the outside world — as a consequence of the increasing economic relations with China through the cross-border trade and the distribution of Hollywood and South Korean entertainment products through informal markets — there is a tendency toward general scepticism of the “facts” propagandized by the leaders. In this respect, enlightening are the words of Hannah Arendt on the delineation of propaganda and ideology mechanisms, affirming that the success of totalitarian propaganda on popular consent is strongly determined by the coherence and cohesion of the political system:
“ True goal of totalitarian propaganda is not persuasion, but the organization of the polity. [...] What convinces masses are not facts, and not even invented facts, but only the consistency of the system of which they are presumably part. ”
In this respect, the Kim Dynasty represents the perfect example: although their rule was punctuated by problems and threats determined by both internal and external forces, the leaders have proven capable of maintaining their dominion and assuring political stability through the reliance on a strong and steady system that met the compliance of both the elite and the masses: the songbun caste system.
First ratified by the Great Leader Kim Il Sung in the 1960s and pursued by his successors, the songbun is a political system that labels the North Korean population according to their state devotion. The belonging to an established social class is determined by two factors: one’s origins (namely, the socio-political background of their entire family) and one’s individual socio-political behaviour and performance. According to this system, people are thus categorized as ‘loyal’, ‘wavering’, or ‘hostile’, and their affiliation to one or the other caste is determined by investigations carried out by the government. Moreover, the caste dictates every aspect of North Korean social and working life: employment, food rationing, medical treatment and place of residence; everything is determined by one’s songbun.
The songbun system undoubtedly is one of the key features that help to explain Kims’ durable triumph. First of all, it is in all respects an effective measure of social security. The large scale investigations implemented through the system indeed provide the regime with updated screenings of the North Korean population, successfully identifying those who could constitute a threat to the regime and must be rooted out through political purges. Furthermore, the ‘labelling’ of North Korean society also dampened the people’s counterrevolutionary spirits, made vulnerable to the threat of drastic punitive measures (which include a generational punishment in the event that an individual was guilty of disloyal behaviour) and the demotion to a lower class and the consequent loss of fundamental rights.
By the same token, the songbun system also underpins the institutional structure which made the Kim regime ‘coup-proof’. The North Korean inner circle is indeed comprised of a tightly-controlled selectorate elite that includes military leaders, party officials, and bureaucrats; and this elite forms the so-called “core class”, whereby its loyalty to the Kim regime is rewarded through significant privileges in every aspect of life. The elite obviously occupy the highest ranks within the political and military system, and they are appointed to positions that sustain and protect Kim’s rule.
Despite co-optation not being unique to North Korea as a strategy for the maintenance of political stability, it is however interesting to highlight how the bribery of the core class has enabled the Kim Dynasty to survive for three generations. This was obviously possible thanks to the meaningful measures taken by the leaders during their rule. Most notably, every transfer of power from father to son has witnessed a political purge, where the closest associates of the previous leader are removed in order to ensure the political dominance of the current Kim in power. This is a stance that has a great impact both politically and ideologically, in the intention to assert, once again, that the power belongs to the ruling Kim and no one else.
Therefore, I agree with the Political Science professor Van den Bosch in identifying the Kim regime as a “personalist” state: despite the common thinking, the DPRK cannot be conventionally classified either as a party-state nor as a military-state, but as a “highly personalized regime that in which both the party and the military apparatus has been coup-proofed and instrumentalised to keep the Kim family in power”. And, in my estimation, therein lies the triumph of the Kim dynasty. 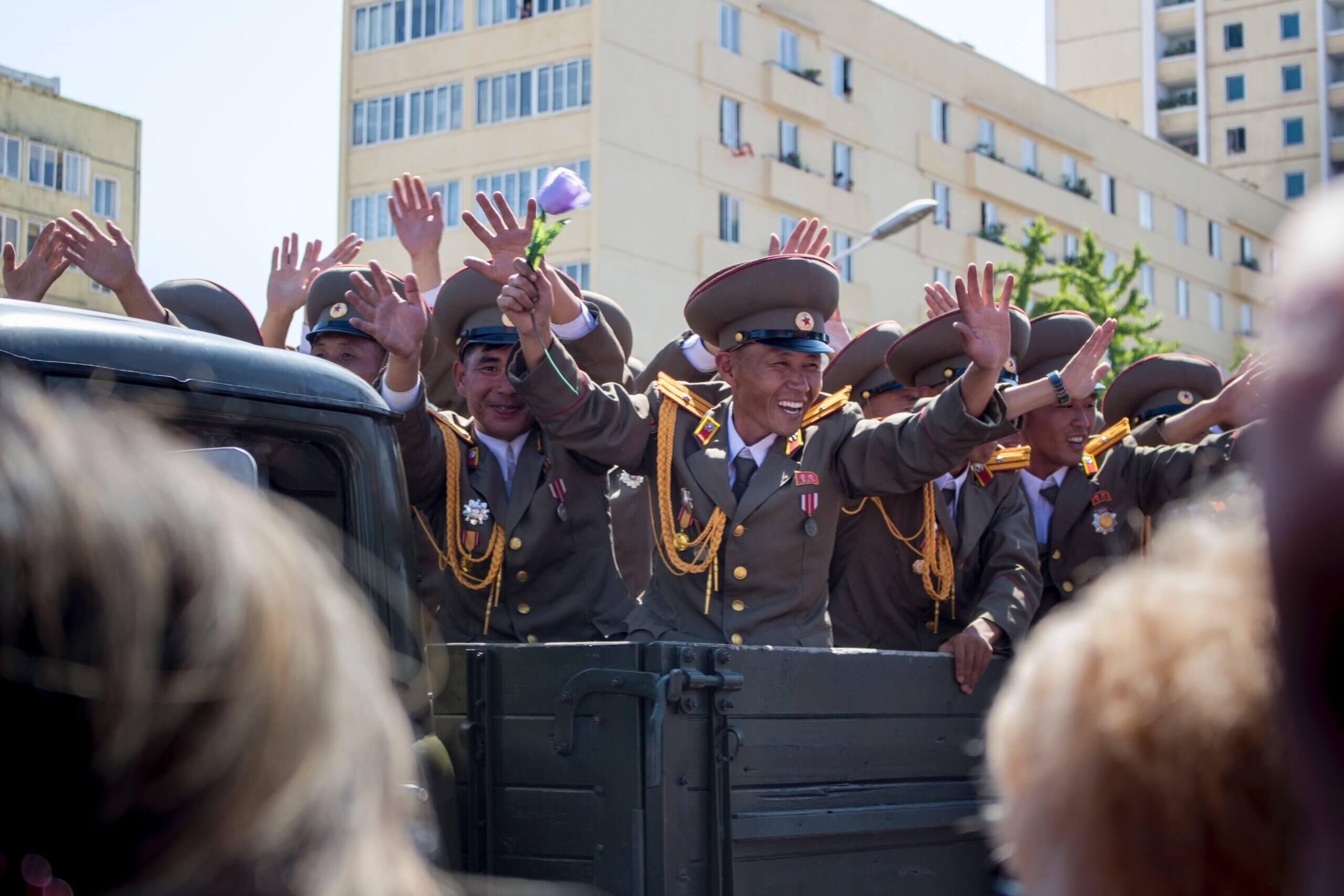 Military parade in Pyongyang
Source: Micha Brändli on Unsplash.
Along these lines, the recipe to success of the Kim dynasty doesn’t simply lie in the fabrication of compelling ideological rhetorics. Instead, their lineage successively achieved consent and longevity thanks to a solid, personalized political system that still guarantees their power. Although it cannot be denied that ideological discourses endorsed the inheritance from father to son at the grassroots level, as well as strengthened the regime during times of crisis, it is important to insist that it was the establishment of a strong, coup-proofed system that secured their family dominion and the consequent survival of the North Korean state.
Personalized communist system, compelling ideology, capable and charismatic leaders.
This is how the North Korean regime should be re-evaluated in order to keep up with the Kims and their coercive regime.