Or, what happens when traditional Indonesian gamelan music turns ‘metal’

Indonesia
December 14, 2020
Pleasing ancient royal courts, calming stressed minds and inspiring experimental compositions by Claude Debussy and metal bands — the list of creative uses and reuses of Indonesian gamelan music seems endless. Its versatility does not come by surprise as nearly two millennia left their traces on this ancient musical genre. What constitutes its popularity and admiration, or its unique sound, takes you on a journey of musical theory, colonial history and spiritual customs. 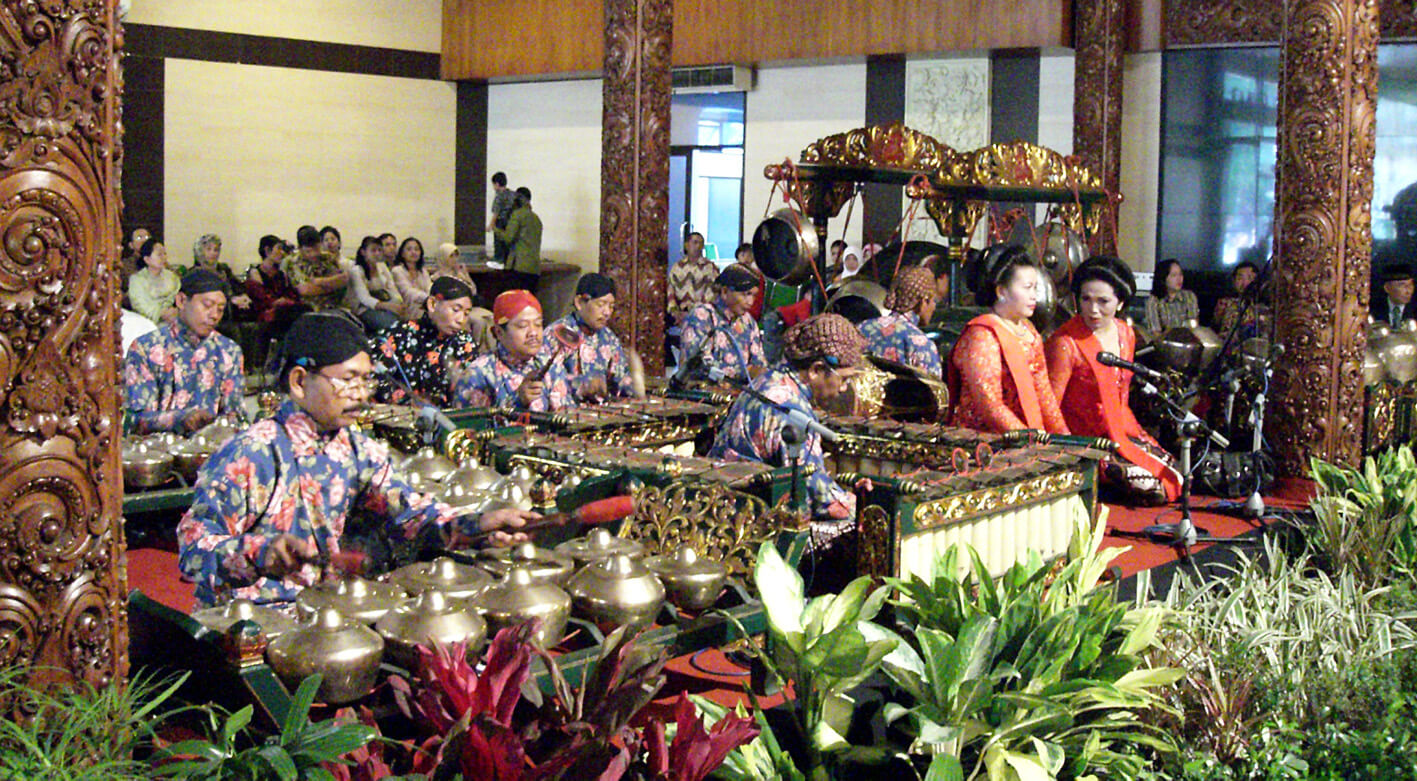 A Javanese gamelan orchestra performing at a wedding ceremony.
Source: Gunkarta, CC BY-SA 3.0 , via Wikimedia Commons
Some say that the ability to jointly endure and solve temporary tensions is what keeps relationships strong and long-lasting. We are probably all familiar with the rewarding feeling of relief when we manage to resolve a conflict with a close friend after an uncomfortable period of  misunderstanding or conflict. Somehow, we can thus acknowledge that a little bit of disharmony is therefore not necessarily bad for us. But transferring such preoccupation with disharmony to music, and remembering our teacher’s insistence on maintaining the right tuning and pitch when we play, would you equally agree that disharmony, temporary or not, is a key ingredient for a successful musical performance...?
Surely playing disharmonic, ‘wrong’ tunes does create a sense of tension, but not the type you might aim for. Instead, it corrupts both the professionality of the artist and the ears of the audience and fellow players - at least when you judge from the standpoint of someone growing up with Western European musical heritage. As always, however, some music genres dare to challenge this static preoccupation with perfect harmony—not (always) necessarily because its practitioners feel the eccentric artistic urge to contradict the status quo, but rather because a fundamentally different understanding of harmony lies at the genre’s core. Traditional Indonesian gamelan music may be called one of these ‘genre rebels’.

Tracing the history and disharmonic sound of gamelan

Inspired by the words gamel (hammering) and gamelan (ensemble), the term gamelan is an umbrella term for a variety of percussion-dominated Indonesian ensemble music. A typical orchestra consists of just a few or up to approximately 30 artists, all of which play instruments ranging from bronze gongs, metallophones, and drums to gong-chimes, flutes, and string instruments. Some performances even include vocals.
Its precise historical origins remain unclear, but gamelan’s heritage is assumed to stretch back almost two millennia: The first writings that hint at the play of gamelan even date back to the 6-8th century, where it was performed as ritual at royal courts of Hindu and Buddhist kingdoms, predominantly in Java, Sumatra and Bali. Today, gamelan has transformed into a more common art and can be enjoyed during both private and public social gatherings, and even studied at music schools.
For those accustomed to European baroque or classical music á la Bach, Mozart, & Co, Indonesian gamelan music can sound slightly irritating, if not even wrong. This experience is caused by the music scales that lay at the heart of gamelan compositions. While many ‘Western’ genres have long been composed using major and minor heptatonic music scales, with seven notes per octave, the majority of gamelan compositions make use of pelog scales (seven notes per octave with distinct, uneven intervals) and pentatonic sléndro scales (five tones per octave). Their sound may appear unusual to first-time listeners, or remind one of more experimental or impressionistic tunes.
Apart from its tuning, the melody of a gamelan piece is polyphonic, meaning that competing lines of rhythm and melody are played simultaneously, compete with another, and then become interwoven at last—a process otherwise called interlocking. Suspense, tension and melodic climax are achieved by altering rhythm and density of sound, e.g. by doubling or quadrupling the note value of the same, recurring tone. Relaxation is achieved by reversing the latter, e.g. by halving the notes.

Drawing the lines between various strands of influence

The most common line between gamelan's subgenres can be drawn between Balinese gamelan, characterized by faster, brighter, and ‘rattling’ sounds, and its calm and soothing Javanese counterpart. The two strands remind us of Indonesia’s unique historical, cultural and colonial legacy: The calm melodies of Javanese gamelan are believed to have developed under the influence of Muslim, Arabian and South Asian traders and settlers, and by Sufism, a branch of Islam that assigned divine qualities to music. Balinese Gamelan, on the other hand, was developing more virtuoso melodies and quicker tempos, which also corresponded greatly with the musical tastes of arriving Dutch Colonial powers.
Spice trade and the colonial era, with influences from Portuguese, Arabian, African and Indian cultures co-shaped further varieties of gamelan, and brought along a stronger emphasis on interlocking patterns as well as a broader diversity of Western instruments such as the violin, cello or ukulele. In the end, however, a plethora of gamelan subgenres and related musical strands have developed across the peninsulas of Indonesia and other East and Southeast Asian nations.

Along the years, however, Gamelan has not only served to please audiences or to practice spirituality, but has also been used and reused for different purposes:
In post-Independence Indonesia, for example, while the ruling Sukarno regime fought hard to nurture nation-building and stability, Gamelan was promoted as a symbol of national art. Making gamelan part of the nation’s identity, while marginalizing other arts in a country inhabited by diverse ethnicities, cultural traditions and heritages, was only naturally an act contested by large parts of the population.
In the realms of contemporary musical therapy, health practitioners have begun to acknowledge gamelan’s healing qualities: Playing and listening to a gamelan piece can take you on an emotional journey from orgasmic ecstasy to meditative calmness, while a successful performance demands high levels of focus, empathy and sensitivity towards your fellow players. No wonder gamelan serves therapies promoting mental and emotional balance well.
As already hinted at, the sound of gamelan music not only reminds us of experimental tunes, but has in fact been used in experimental ways outside of its original context. Several metal bands, for instance, have incorporated gamelan elements into their performances. Then, picking up the its ‘rebel character’, even though the genre probably never intended to have it, once more: gamelan is said to have even inspired the compositions of young Claude Debussy as he was exhausted of following the static rules and expectations of music in his time, leading to his famous piece Pagodes.

While it is challenging to give the complexity and multifacetedness of gamelan justice, this article ends with three curious facts—and with four listening samples for those who desire to find out if they encounter one, or all, of the following promised experiences: listening to something ‘wrong’, experiencing orgasmic ecstasy, or entering a state of meditative calmness at last…