Thailand
November 22, 2021
Thanon Khao San road may be Southeast Asia's most famous street. Known as backpackers paradise, hundreds of thousands tourists visit the street each year. While you may not be able to visit Thanon Khao San at the moment, join us on a journey to see how the street became a tourist mecca. 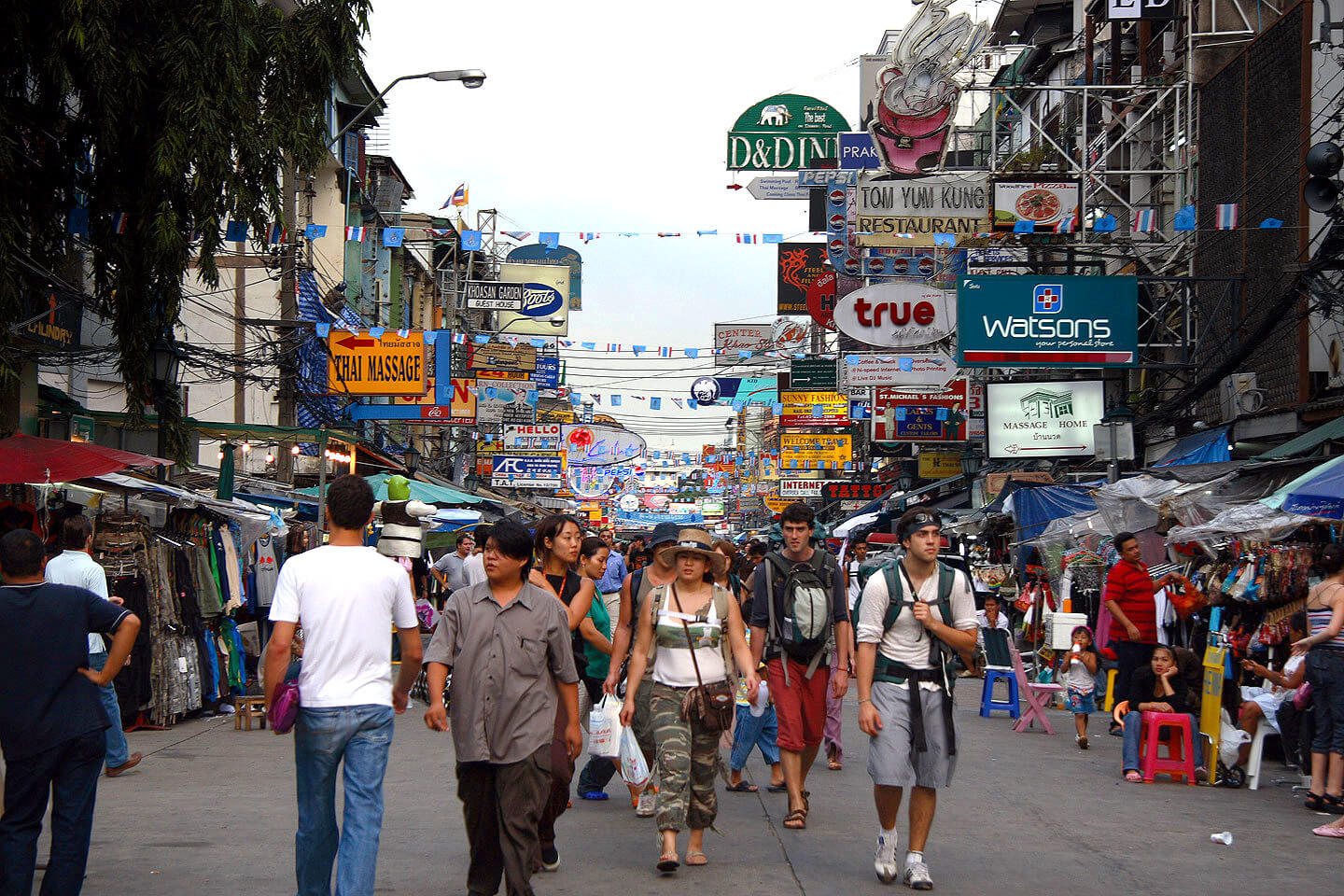 Thanon Khao San, known as “Backpackers Paradise”, is nestled between the Chao Phraya river and the Grand Palace, and might be Bangkok’s most famous street. Before the COVID-19 pandemic, the street would see up to 50,000 visitors a day during high season, being home to hostels, bars, tourist agencies, street vendors and much more. For backpackers travelling through Thailand and Southeast Asia, Khao San road is often a starting, intermediate, or ending point of their travels.

With the pandemic and the absence of tourists, the street has once again evolved. Khao San road is a tidewater, a place where cultures and nationalities meet and mingle; a place where you can leave the club at six in the morning and encounter someone else offering alms to a Buddhist monk from a nearby temple . Follow our journey through Thanon Khao San’s development over more than a century, and with it a examine at Bangkok’s history as an international destination.

Long before Thanon Khao San became the backpacker hotspot of Southeast Asia, the street hosted Thailand’s, then known as Siam, largest rice market. Today, only the name Khao San (ถนนข้าวสาร) which translates to “as much as milled rice”, is left of that part of history. Construction of the area started in 1892, due to increased commerce in the area. During this period Bangkok was experiencing an immense transition and Siam itself was undergoing great changes. Due to colonial pressures from the British in the West and South, and the French North and East, King Chulalongkorn modernisation project was under full swing. Bangkok’s vast waterways were slowly being replaced by road systems. The building was only one construction project among many. Until the first tourists would trickle into Khao San road, Bangkok as a city would grow steadily. The country changed its name from Siam to Thailand and with the start of the Vietnam War, American tourists, in particular military personnel, started to come regularly to the country. Khao San road as a market place had expanded from rice to other fields of commerce.

When the first backpackers on the Hippie Trail in the 1960s and 1970s started to trickle into Bangkok, Khao San road was still Bangkok’s hot spot for commerce, selling rice, clothing such as uniforms and costumes, and also jewelry, not a party nor a tourist destination. However, this would change drastically with the 200th anniversary of Bangkok in 1982. Within six years, many guest houses had sprung out of nothing, changing the street forever. In 1982, most tourists would stay on the other side of town, close to Lumphini Park and the not too far off Patpong Red Light District. However, due to the anniversary, hotels were overflowing and some houses in Khao San opened their doors to guests due to their proximity to the festivities and attractions such as the Grand Palace. Joe Cunnings, who wrote for the Lonely Planet in the early 1980s, commented that, had there only been three guest houses in 1982, each year the number would grow exponentially. By the mid 1990s, Khao San had become a backpacker institution, with a flourishing black market for CD and DVDs, fake IDs and everything else the backpacker heart may desire. The publication of The Beach in 1997, by Alex Garland added to the seedy image the street had in the public eye. Nonetheless, embarking on a journey through Asia, visiting the street was a rite of passage. The 2000 film version, featuring Leonardo diCaprio did the rest. Despite the opening scene, which takes place at Khao San. not even being filmed there, but rather on an artificially built film set on Koh Phi Phi . 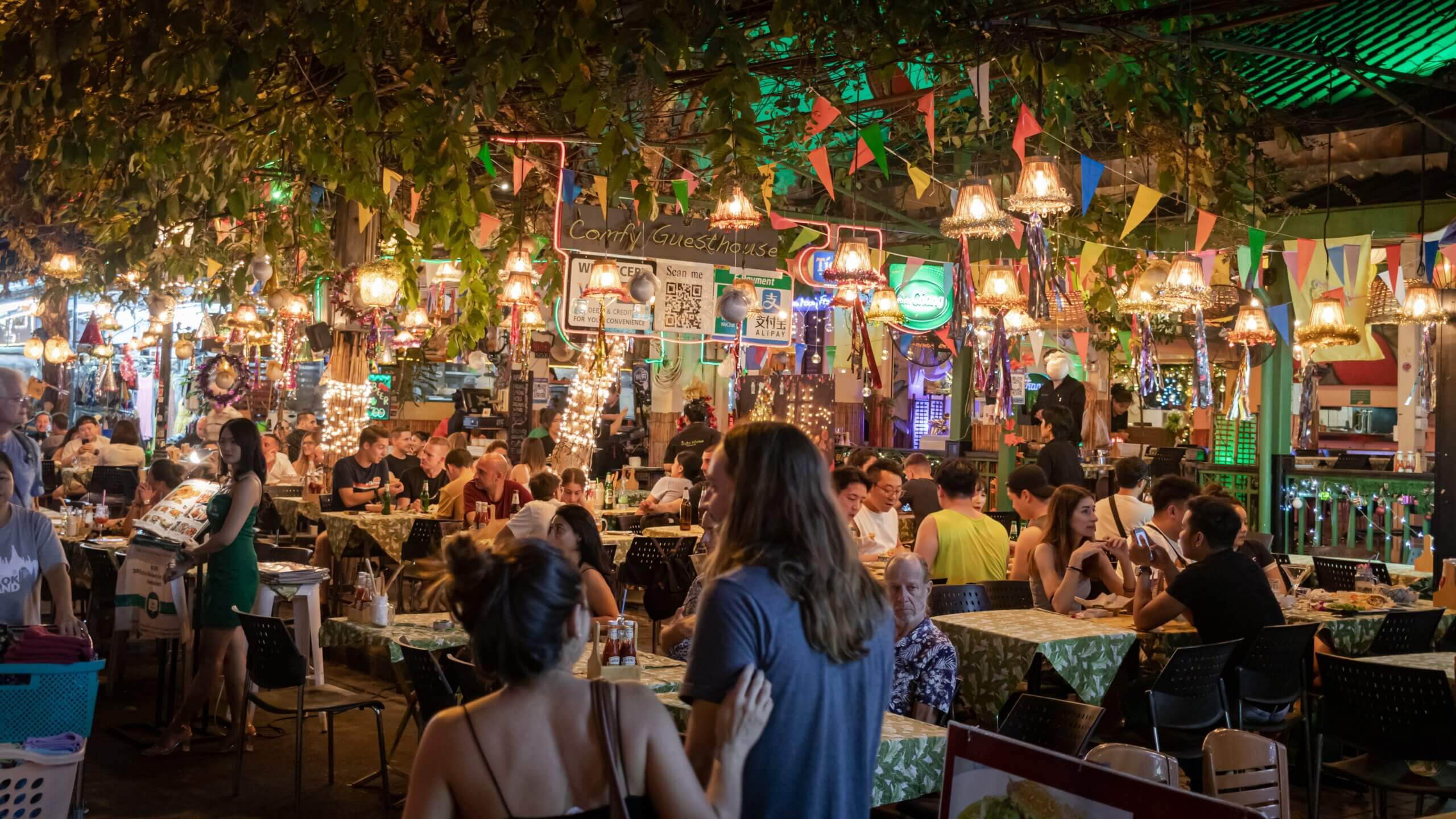 A gentrification of Khao San road? 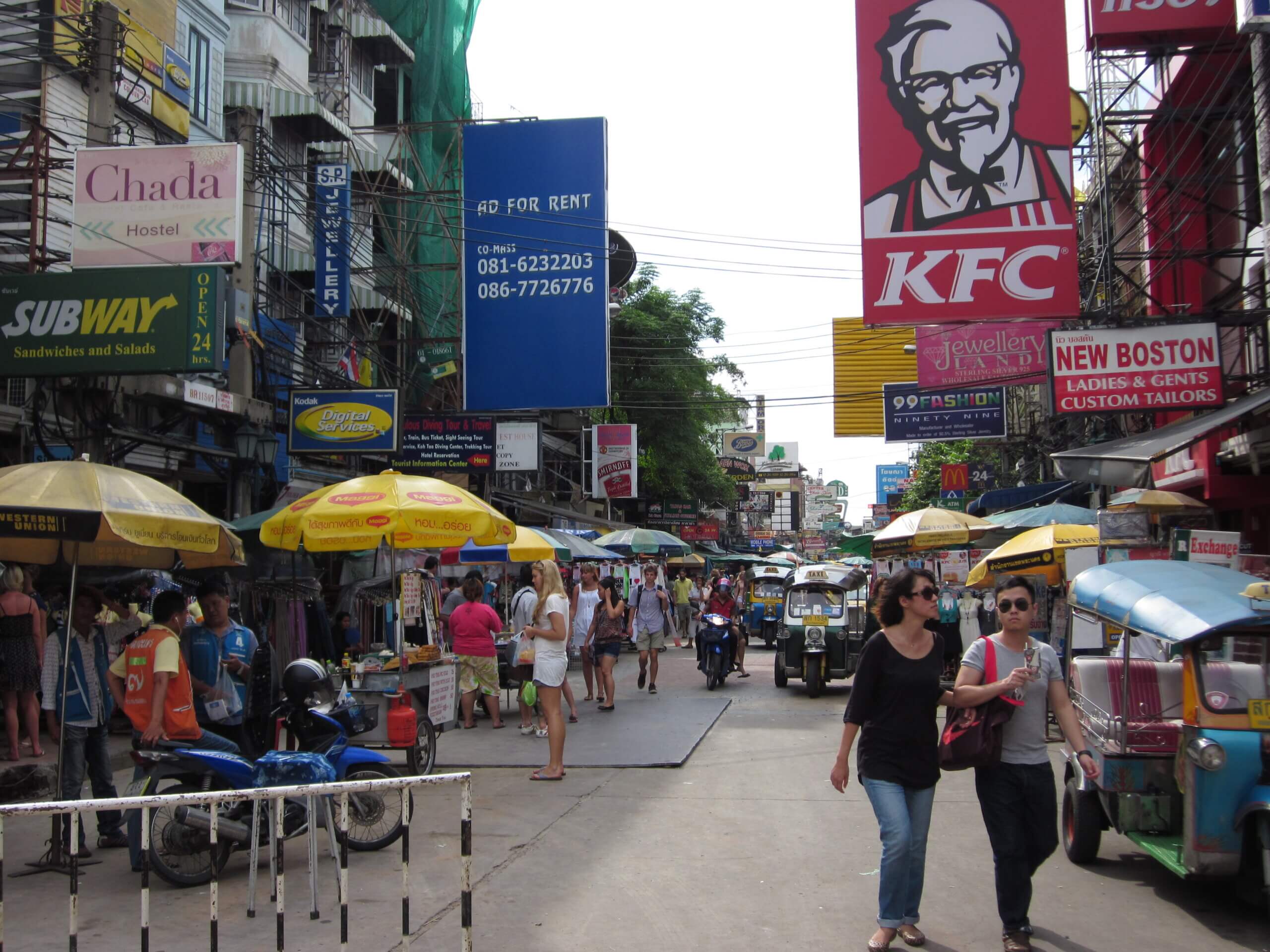 Khao San Road during the day

Khao San road was not destined to remain suspended in time. Change arrived in the street, as it does for all things. Things evolved quietly at first, with the opening of Starbucks in 2011. Situated in a beautifully renovated Thai wooden house, the American brand was a harbinger of slow transformation for the area. Other cafes and restaurants started to renovate their places in the coming years. Additionally, it indicated a change in the kind of tourists that stop on Khao San road. No longer were backpackers the only night guests in the streets, but also family tourists would take up residence in the area. Slowly, Khao San also changed for local Thai residents. It had previously been a place only for seedy tourists, but Banglamphu turned into a hip area for nuevo riche Thais, and students from the nearby university campuses. Opinions by business owners, however, on Khao San road about catering to tourists, became increasingly negative. The sense was that, while tourists in the old days were interested in Thai culture and the country, today’s tourists only looked for the best places to party. When Bangkok announced to invest 1,2 million euro into giving the street a new face, it still came as a surprise. Gentrification had officially arrived in Khao San. The plan, which was supposed to be completed by 2020, included a leveling of the footpath, assigned vendor hours, and a prohibition of street vendor carts. In 2017, the night streets had still been filled with advertisements for ping pong shows and laughing gas, by 2019, all of that had vanished. Partying no longer took place 24/7 but was relegated to night time.  The streets were a little bit cleaner than previously and regularly the police would come and confiscate chairs and tables that blocked the street. Nonetheless, life and tourism was always present. Khao San was bustling with people sitting in restaurants and cafès, tourists arriving and leaving, young backpackers sitting on the street waiting for their busses, locals and foreigners mixing in clubs and bars along the street. 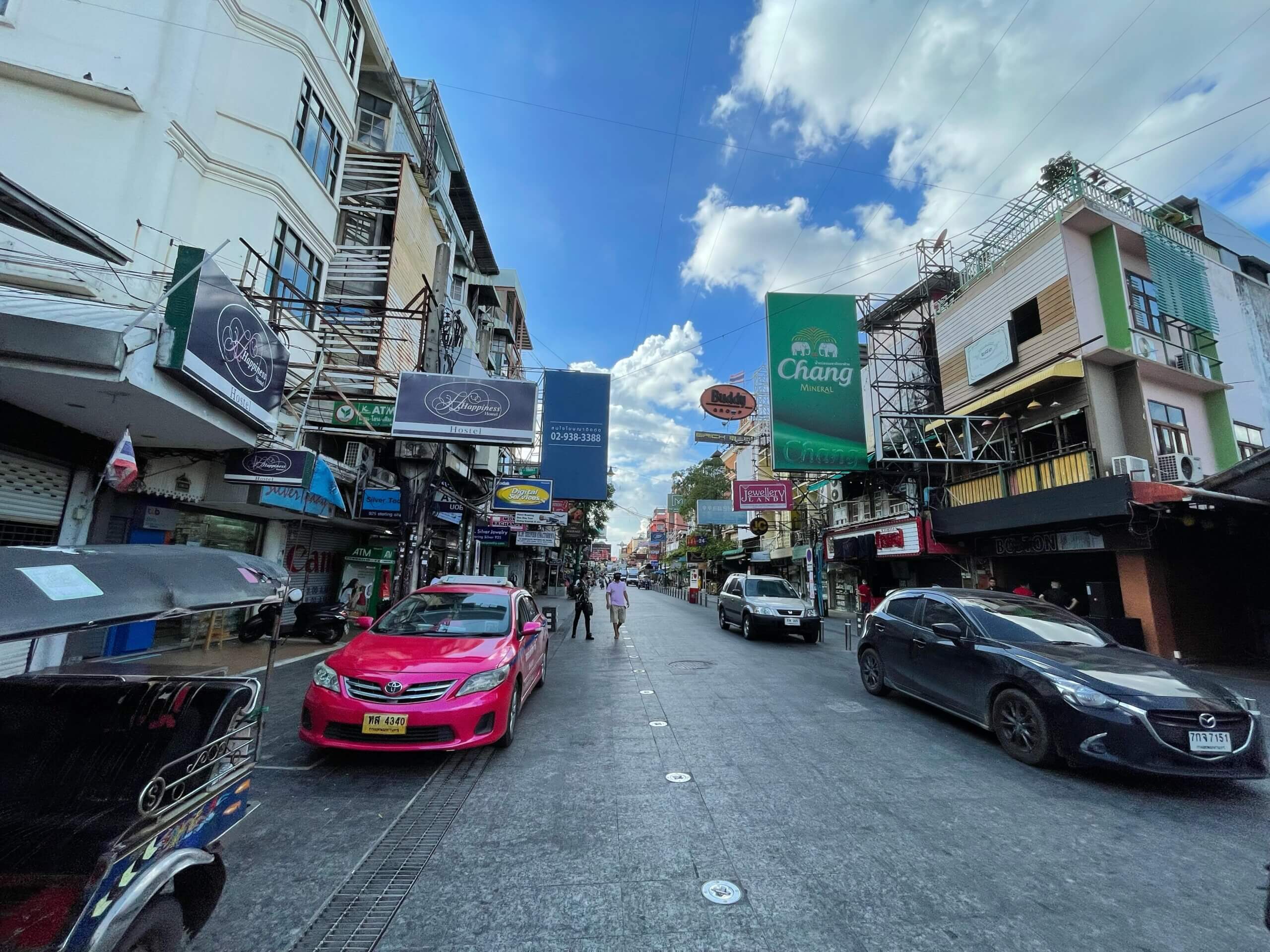 When COVID-19 hit, there was an exodus of tourists, and Thailand closed its borders to prevent the spread of the virus. For a country in which many ways depend on the tourism sector this has been devastating. Many Thais lost their jobs. Hotels, bars and other industries have had to close.  Khao San road, once known for never staying still, was suddenly abandoned. After a several month long lockdown, some of the institutions were allowed to open again. However, the borders remained closed and profits dropped significantly. While many have shifted to catering to local guests, owners are unsure if they can survive the pandemic.

On the 1st of November the government eased some of the regulations in Bangkok in an attempt to gradually open up tourism and business in the country’s capital. One approach was to allow restaurants (not bars) to sell alcohol until 9 p m, but only if they acquire SHA-certificates granted by the Safety and Health Administration. This has been proven to be difficult for smaller establishments and Thailand’s nightlife has transformed into something that starts looking like the prohibition era. Desperate small and medium businesses defy the government’s regulations. Speakeasy-style bars and clubs can be found around Bangkok if you know where to look and the Bangkok police has been working around the clock to find illicit establishments that sell alcohol after 9 pm and for breaking the Communicable Diseases Act and the Emergency Decree. In order to not draw too much attention, many of the illegal businesses have a strict no-photo policy and no social media tagging rules. This does not mean that it is without any risk for the guests. Thousands of foreigners and Thai people have been detained by police raids around Bangkok. In October 2021, the Bangkok police charged over 116 pub-goers in KoreaTown for violating the rules.

Despite these developments, Khao San Road has become somewhat of a safe haven for partygoers in Bangkok. Covid-checkpoints have been implemented at both ends of the street and party-goers have to prove documentation of being double vaccinated. Still, the party stops when the police enter Khaosan Road at 9 p.m. to remind the bars of the regulations. When the police drive along the Khao San Road with megaphones, all bars pack up and close the doors leaving their guests stranded on the crowded street. Once the police leave, the nightlife continues as if nothing happened. 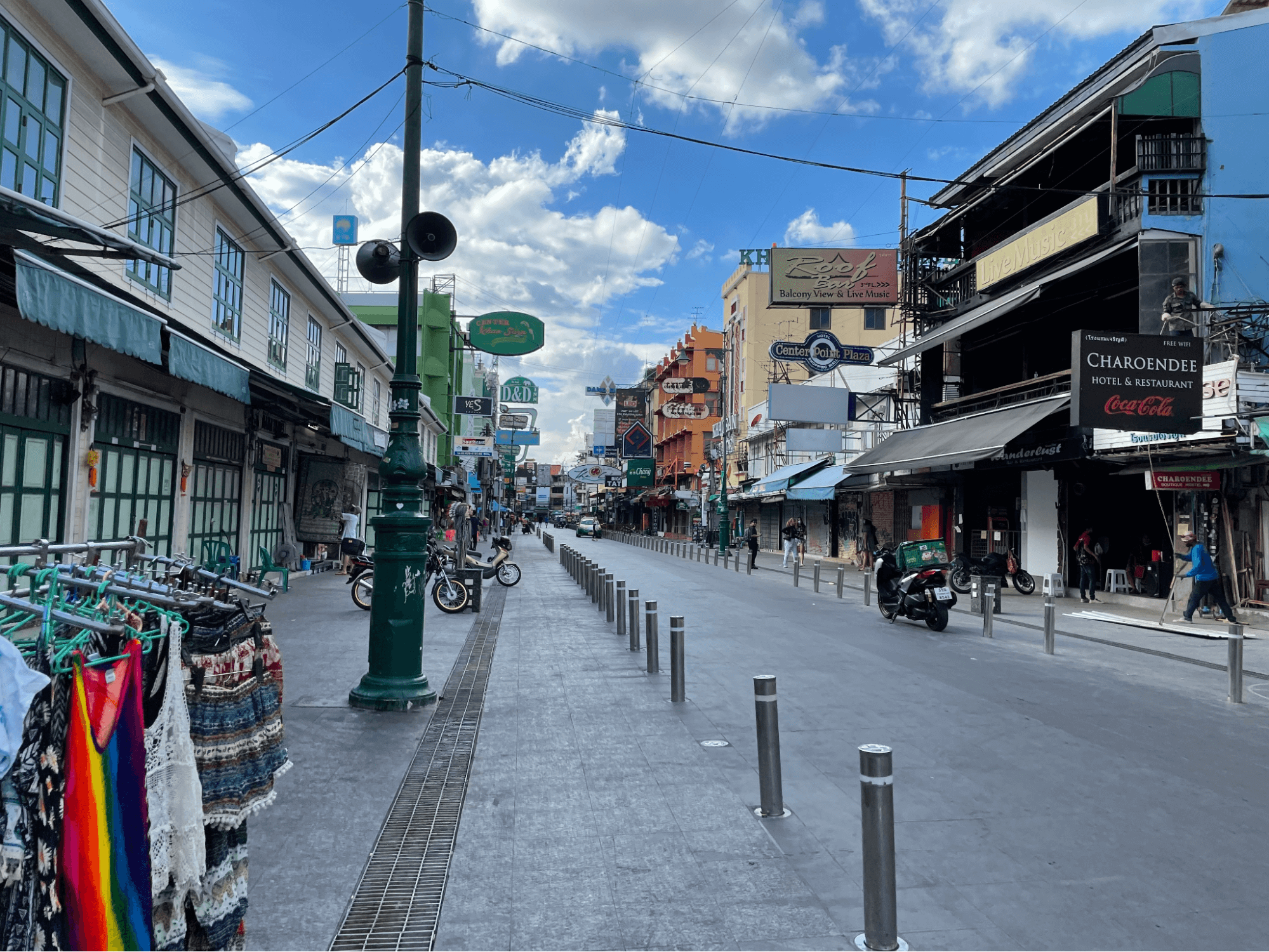 In 2016, Thailand’s aims shifted from “quantity” to “quality” in regards to tourism. Overcrowding forced the Thai tourism industry to close certain beaches, most notably Maya beach on Koh phi phi, where The Beach was filmed. Thailand has tried to move away from mass tourism and attract fewer, richer tourists. This shift has not come without its criticism. Many Thais depend on the industry, which makes up a significant amount of Thailand’s GDP. Small businesses will most likely suffer severely by this shift. Richer tourists are more likely to spend more money in resorts, unlike low budget tourists that tend to eat more locally. Hence, backpackers may actually be more beneficial for small businesses and the larger part of Thai society than richer tourists. Additionally, the environmental impact with which this shift is often promoted may be lesser than assumed, given that resorts and private transportation have larger footprints than low budget travel. With the borders open again since November first, new visa types for higher-income tourists have been introduced. How the Pandemic will change the tourist industry in Southeast Asia is yet to be seen, but Bali already has announced it will not let backpackers back in when reopening.

At Khao San road reopening means that the planned renovations have finished. You may dislike Khao San or love it, but there is no denial that there is no place like it anywhere else. Where else would you simultaneously encounter students at the start of a gap year, or at the end, families with young kids, and aged hippies, Thai university students or monks in saffron coloured robes?! 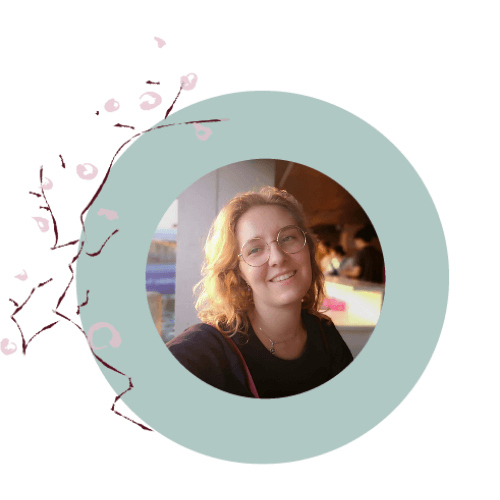 Chief- Editor of the Lunar Times. In 2019 she lived and studied in close proximity too Thanon Khao San. 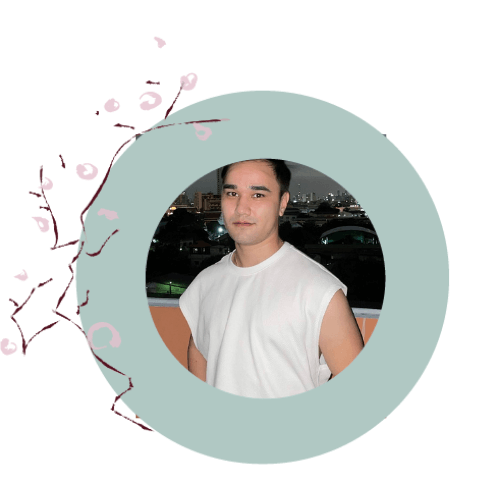 Jonas is a master’s student at the Asian Studies Program. During the academic year of 2021/2022, he is stationed in Thailand on an exchange program and fieldwork. His area of interest is Thai society and politics