Two years of opposing the system: An overview of the Thai political protests 2020-2022

Thailand
March 21, 2022
Since February 2020 Thailand has seen continued protests led by Thai Youth. With demands reaching from reforms of the educational system to demanding reform of the monarchy, the protests have shooked Thailand's politics and society at its core. This article gives an overview of what has happened in the country over the last two years.
"Revolution is not a short act, where something happens, and then everything is different, changed. Revolution is a long complicated process in which the human has to change."
Rudi Dutschke,
Spokes Person of the 1968 German Student Protests

As March 2022 comes to an end, Thailand has hit the two-year mark of continued protests. While the protests peaked in October 2020, activism continues online and on a smaller scale to this day. While several waves of protest were cut short due to Covid-19 restrictions and arrests, the movement has been multifaceted and highly fractured in its demands and actions. However, the various activist groups have been united in their demand for greater democratisation and quest for change to the system. 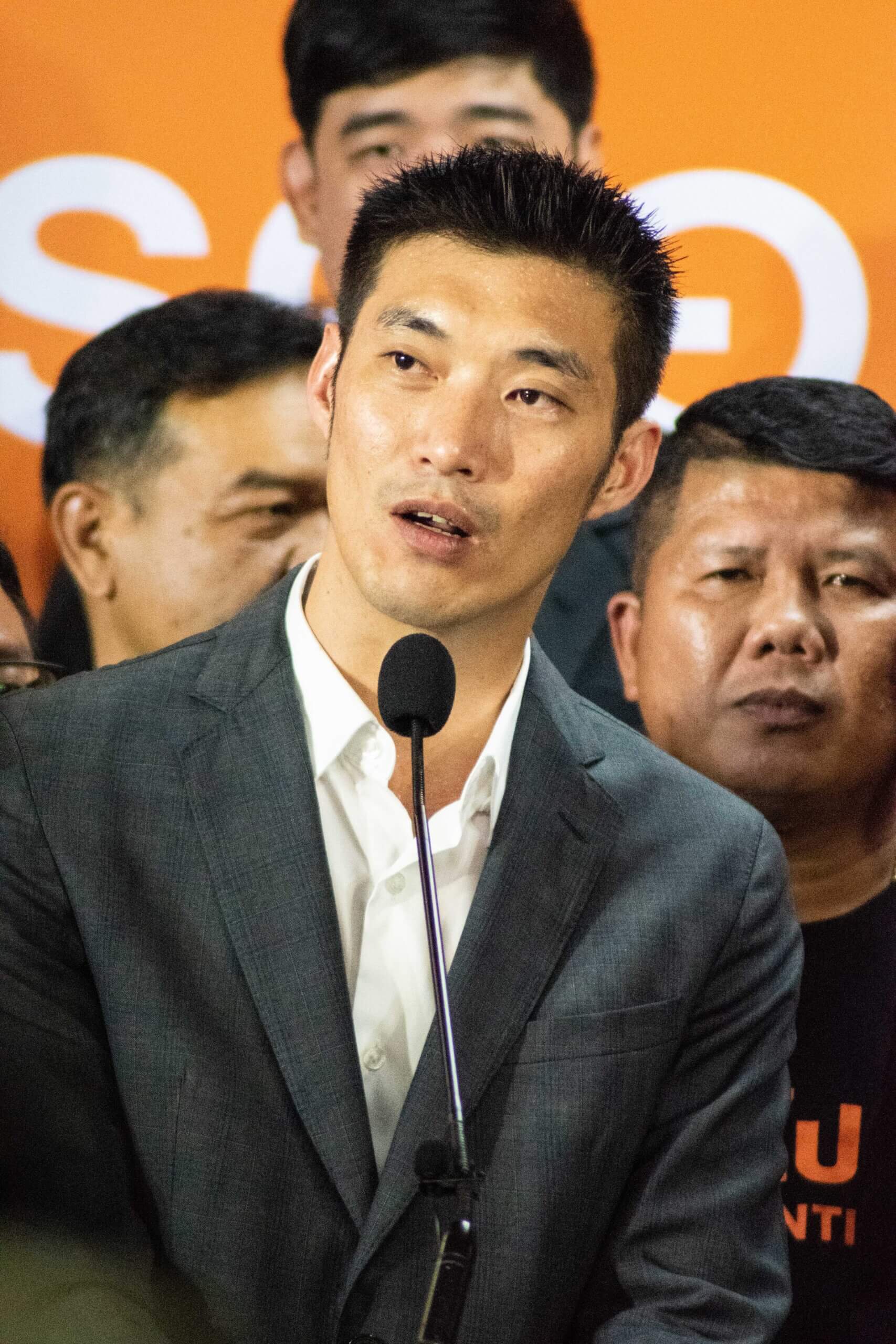 The first wave of protests in early 2020 was sparked by the dissolution of the popular Future Forward Party, which had placed third in the parliamentary election of 2019. Protestors had been disillusioned by the outcome of the elections, where the oppositional parties had won a majority of seats but had been prohibited to form a coalition government. This ensured former Military Leader Prayuth Chan-oh-cha remained in power. Future Forward is a party with a vast social media presence and had been especially popular across the country with Thai youth. The charismatic billionaire turned party politician Thanathorn Juangroongruangkit furthered the appeal. His disqualification from parliament in November 2019, sparked nascent, small-scale protests. The dissolution of the complete party and the exclusion of the leadership from politics for ten years did the rest. Curtailed by the start of the Covid-19 pandemic across the globe, the second impetus for protests would come in June 2020. 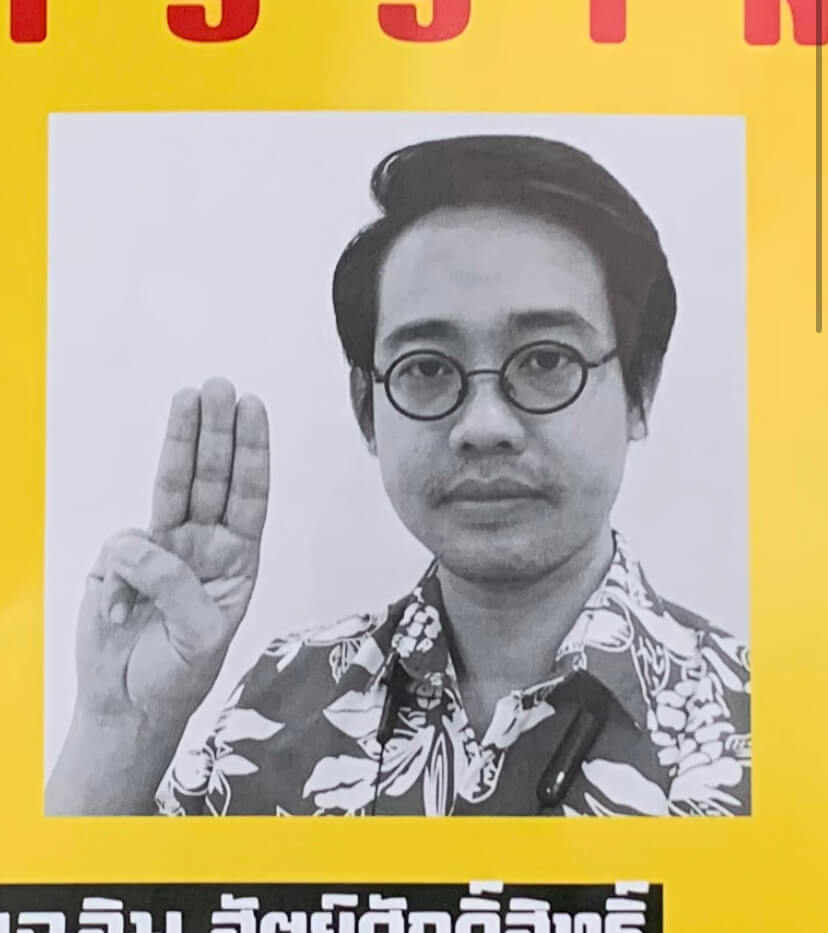 The military junta ruled from 2014 to 2019 and has been accused of human rights abuses such as forced disappearances of political anti-military activists, especially those in exile. Two even turned up dead, their bodies filled with cement in the Mekong River. The country had also seen the repression of freedom of expression and most troublingly an increase of torture and forced disappearances cases. The disappearance of Cambodian-based Thai activist Wanchalearm Satsakist was the second trigger that sparked renewed protests after a loosening of Covid-19 restrictions had taken place. The whereabouts of Wanchalearm remain unknown to this day.

Tensions due to underlying grievances had been running high and the two triggers were like pouring oil into a hot flame. Six years of military dictatorship had led to increased censorship and repression of freedoms. However, widespread access to the internet and social media provided alternatives to the state brought media and education, empowering a youth disillusioned by a harsh government and lack of economic prospects. 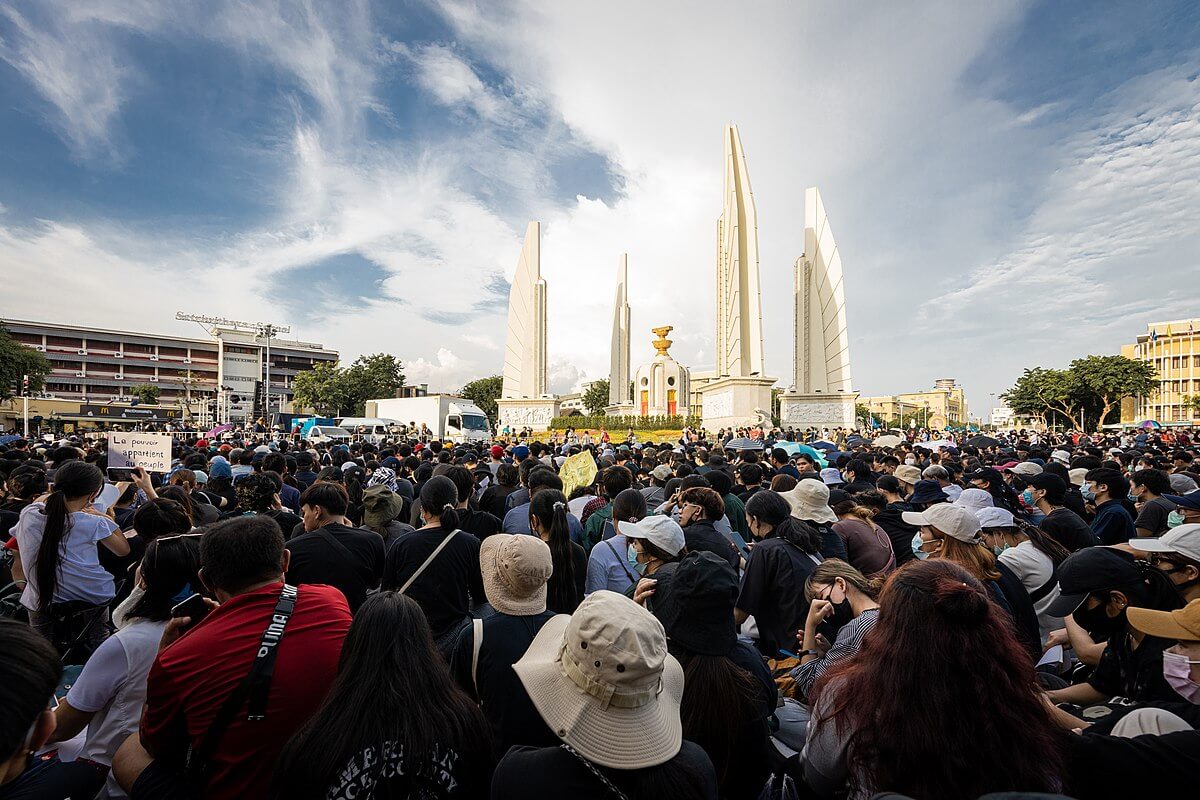 On July 18th 2,500 protestors gathered under the banner of Free Youth at Bangkok’s Democracy Monument, the largest protest the country had seen since 2014. The students voiced three demands:

The protests spread across the country and university campuses like wildfire. By the end of the month, students had been joined by LGBTQ activists voicing further demands for same-sex marriage.

On August 3rd the protest would take yet another dramatic turn. In a Harry Potter-themed protest, human rights lawyer and activist Arnon Nampa voiced an open critique of the monarchy, demanding reforms. This was followed by a rally on Thammasat Rangsit Campus on August 10th by the United Front of Thammasat and Demonstration Group. 3,000 people were in attendance as Rung Panusay read the students’ ten demands for reform. Most striking were the demands to discard royal immunity, abolish Thailand’s draconian lèse-majesté law, to pardon those who had been charged under Article 112, Thailand`s lése majesté law, as well as transparency of royal coffers.

Within a month student groups presented demands to parliament while protests continued to grow. The biggest occurred on August 16, with 10,000-15,000 people protesting.

In September the number of protest attendees grew even more. On September 19th  the biggest protests in years took place on Thammasat Tha Prachan Campus and Sanam Luang square with between 20,000 to 50,000 demonstrators. Throughout October and November, Thailand’s Youth continued to protests, including in front of the German Embassy, the country where the King often visits, in front of Siam Commercial Bank, where the King is the largest shareholder, and in front of the UN Bangkok Office. With increasing arrests and a new Covid wave hitting the country, protests slowed down at the end of 2020.

Many of the leading figures had been arrested and were facing legal battles during this period. 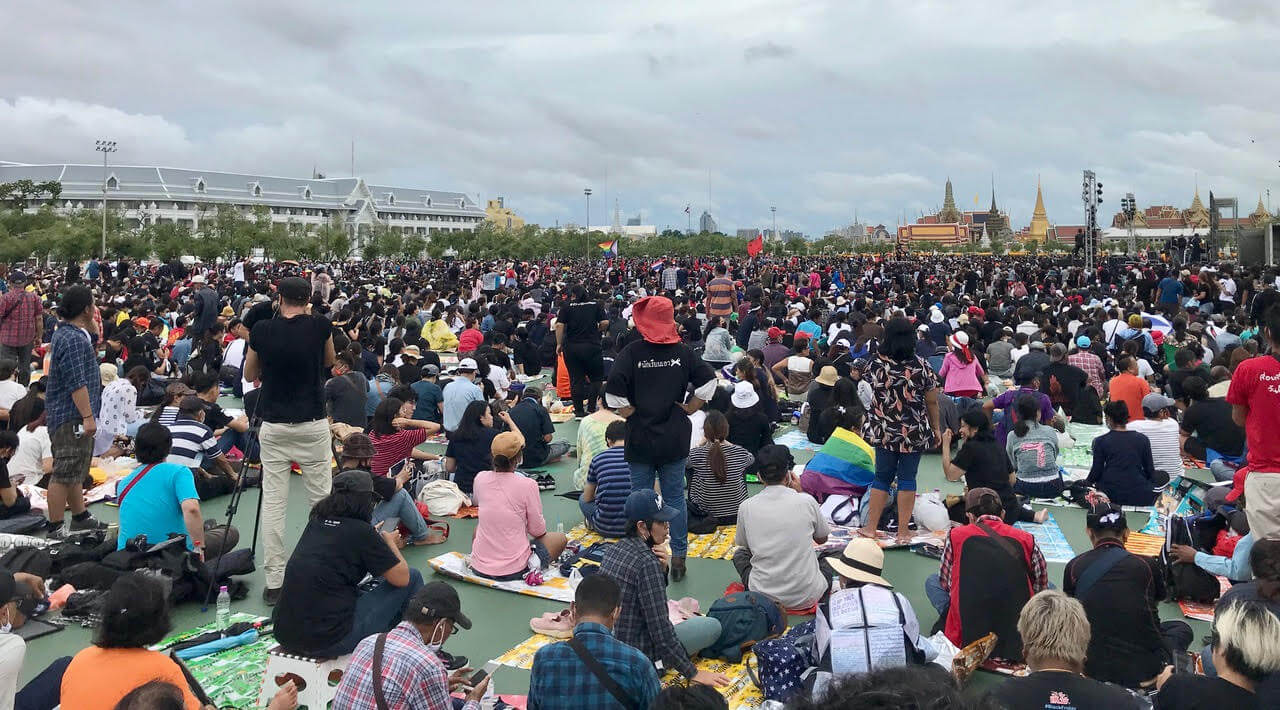 Protestors on Sanam Luang in front of the Grand Palace

By 2021 the protests had peaked in attendance. The movement moved into a leaderless, grassroots period predicated on flashmob protests and online activism. While coalitions of activist groups broke apart,  their demands were also radicalised, along with the measures taken by the government to combat the protestors. 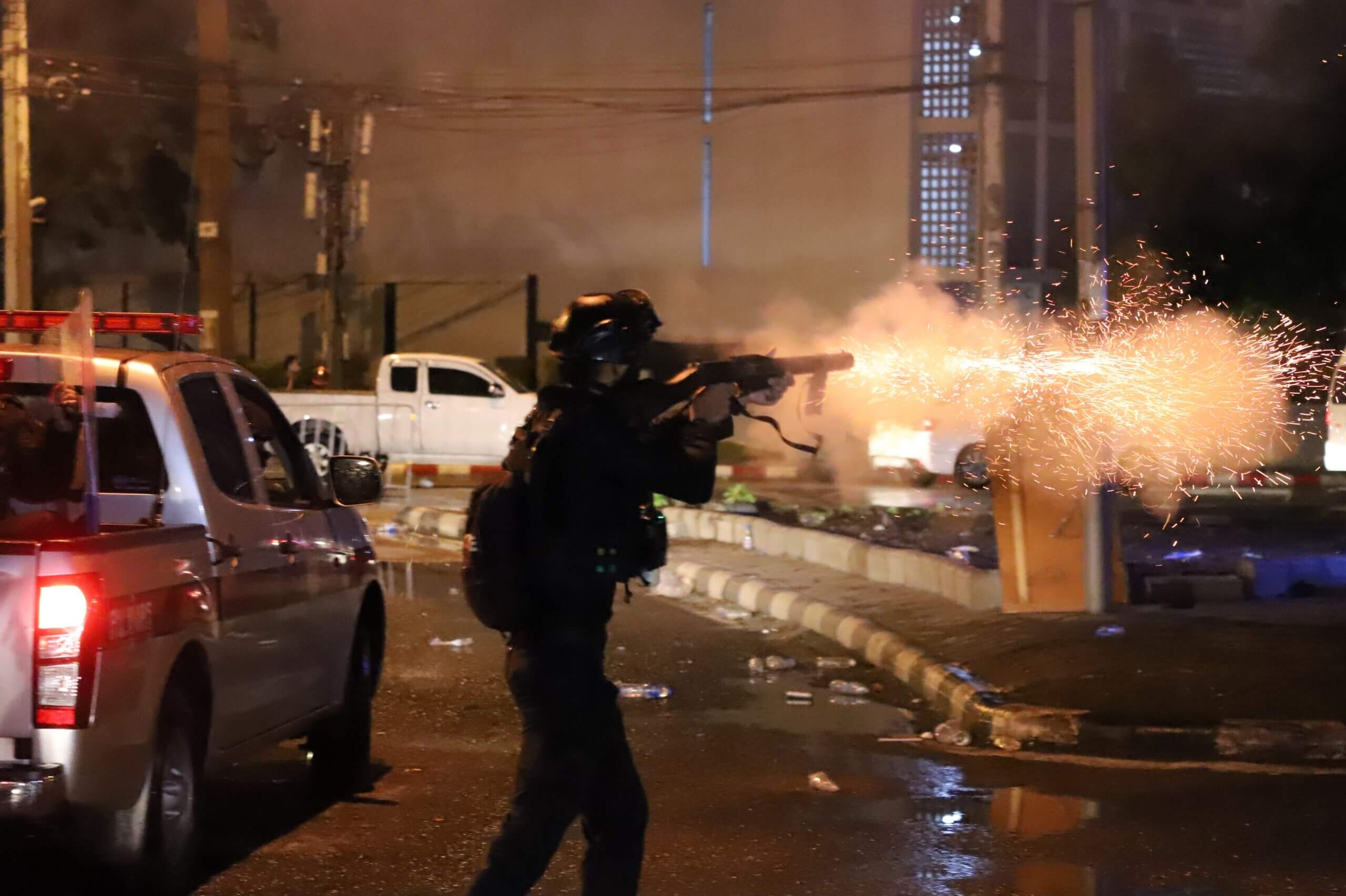 By September the only remaining group conducting peaceful protest was Talufah, made up by youth protestors largely outside of Bangkok. Others had been crippled by arrests and intimidation and could not maintain the large-scale demonstrations. However, non-student groups filled the void, including members of Thailand’s elite, former political activists, and the Thai middle class.

However, with three lockdowns due to Covid 19, the country saw a new youth groups taking to the streets, in August 2021.The Talugas voiced their frustration with the state in a much more violent way than any of the previous protests. As members of Bangkok’s urban poor, the Talugas movement had suffered more direct state violence than the student groups. They had also seen more economic, health and educational effects of Covid19. Almost all of its 400 - 500 members had been arrested in the latest crackdown.

According to official statistics, 1,636 demonstrators have been charged, including 258 minors, from the start of the protests until October 2021.

As March 2022 comes to an end, protests continue in Thailand. While their scale and intensity has declined since 2020 and most activism has moved to the online sphere, the Thai youth have not given up. Many of the leading figures are out on bail and awaiting trial. Some trials have started, others have received sentences, and some may come later this year or even next year. Some groups are regrouping. Nonetheless, it is expected that Prime Minister Prayuth Chan - oh - cha will remain in power. While the attack on Thailand’s political authorty has not shifted the government or laws, the movement has changed the country socially. There is no turning back to the political status quo. The elephant in Thai politics, the monarchy and it's role in politics, long a topic never openly discussed cannot vanish into the unpolitical again. There is no turning back to not discussing the monarchy and its role in politics from the public discussion. Issues with the education system and the violence students experience on a daily basis have come to the forefront of discussions. The long-standing order maintaining political hegemony has seen its first cracks. Gradual change seems to be in Thailand’s future, however, if the Youth can wait that long is yet to be seen.

Additional information in this piece comes from the following academic works:

In addition: to a lecture given by Ajarn Kanokrat Lertchoosakul January 2022 at Thammasat University, Bangkok.
Article by the Lunar Times