What’s inside the Japanese restaurants' showcases

Japan
August 25, 2020
The Japanese culinary experience starts way before food is served. It usually starts with perfectly made food replicas that invite passers-by to stop by and give a try to those mouth-watering dishes. Creating food replicas, however, is more complicated than it seems. Hours and hours of hard work and precision lay behind what appears to be an easy task at first sight. 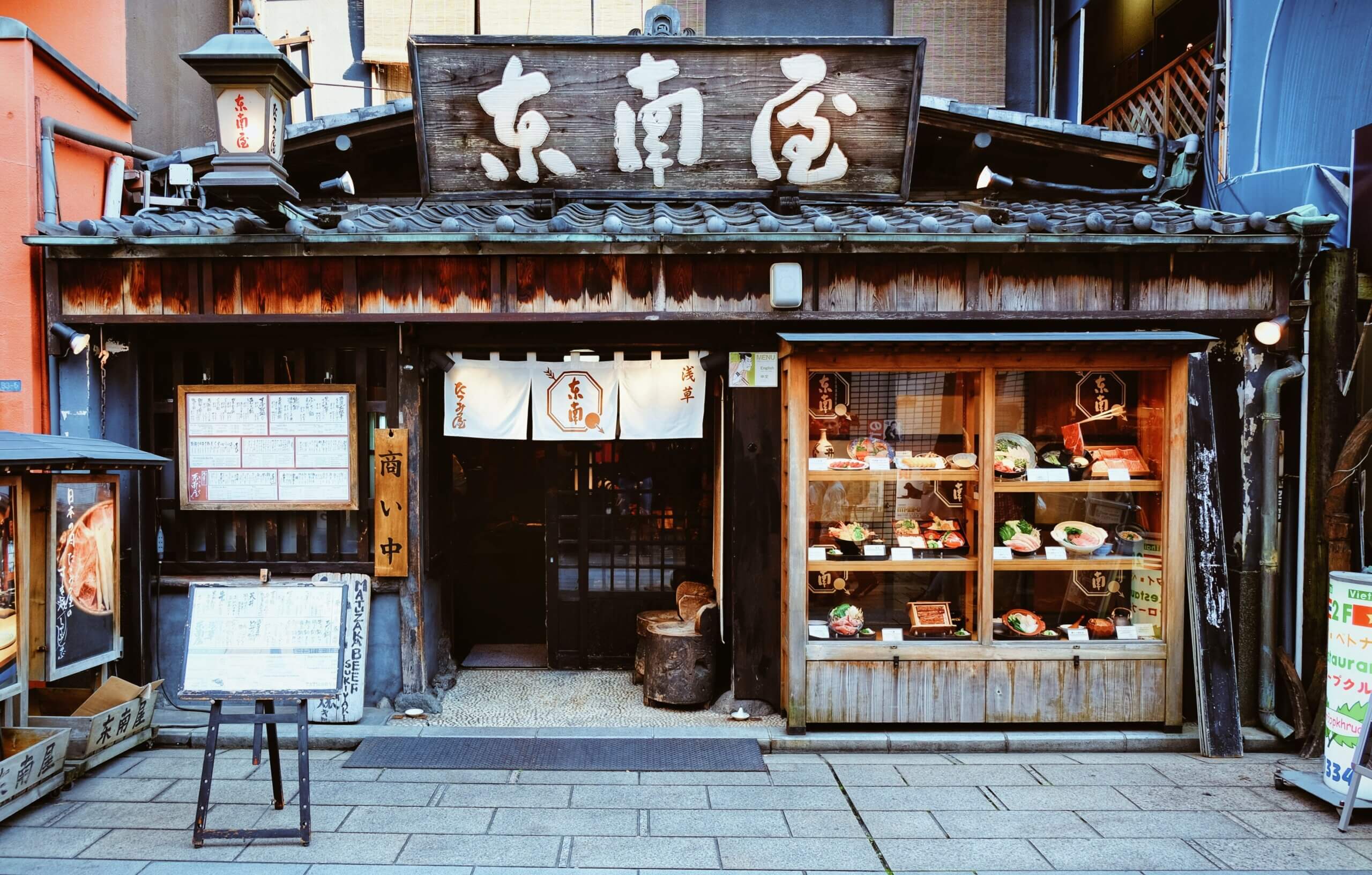 Japanese restaurant displaying food replicas
Source: Hardik Pandya on Unsplash.
We all know that feeling of choosing a meal from a menu consisting only of written words. There is a mix of curiosity and uncertainty that most of the time ends up with a strenuous and time-consuming process. Even worse is to be faced with such a menu when you are a tourist and have very little or no knowledge of the local cuisine and language. Fortunately, nowadays there are plenty of menus that make use of photos to give the clients a visual representation of the actual dishes. But how about an accurate replica of the food you are going to order? Sounds good, right? It seems that in Japan a certain Takizo Iwasaki has thought of this a long time ago. And nowadays, if you stroll on the streets of almost any city in Japan, you will inevitably notice a multitude of perfectly made food replicas proudly displayed in the restaurants’ show windows, inviting you to add one more stop to your busy sightseeing schedule and to enjoy a delicious meal.

How it all began

Food samples, or shokuhin sanpuru in Japanese, date back to the end of the Taishō period and the beginning of the Shōwa period. Despite the fact that there are a few versions of the story and no official document clarifying its exact origins, most of the people agree that the idea itself emerged in the 1920s. It all started when Takizo Iwasaki, inspired by some melted drops of candle wax on his tatami mat, tried to recreate the rice omelette that his wife cooked for him. Not only his wife, but also an Osaka department store found it extremely accurate and realistic. They eventually decided to display it and use it for advertising purposes in 1932. This is considered to be the moment when the art of ‘fake food’ began its ascension to the over $90 million industry we know nowadays.
It is also important to keep in mind that the moment when this idea came out was particularly favourable. The first decades of the 20th century were marked by a combination of phenomena: urbanisation, growing eating-out culture, interest in foreign trends, and later, after World War II, by a considerable wave of immigration from America and Europe. As the number of foreigners that were not familiar with the language and the writing system was increasing, replicas that allowed them to order by simply pointing at the dish sounded like a very good idea. Additionally, the same period meant an increasing sense of attraction to foreign influences, including western-inspired food, known as yōshoku. The difficulty in imagining how a dish with a ‘meaningless’ name that was cooked following recipes so different from those people were used to, meant that food samples would have been more useful than ever. These are two of the most relevant factors that led to a final and decisive boom in the industry. 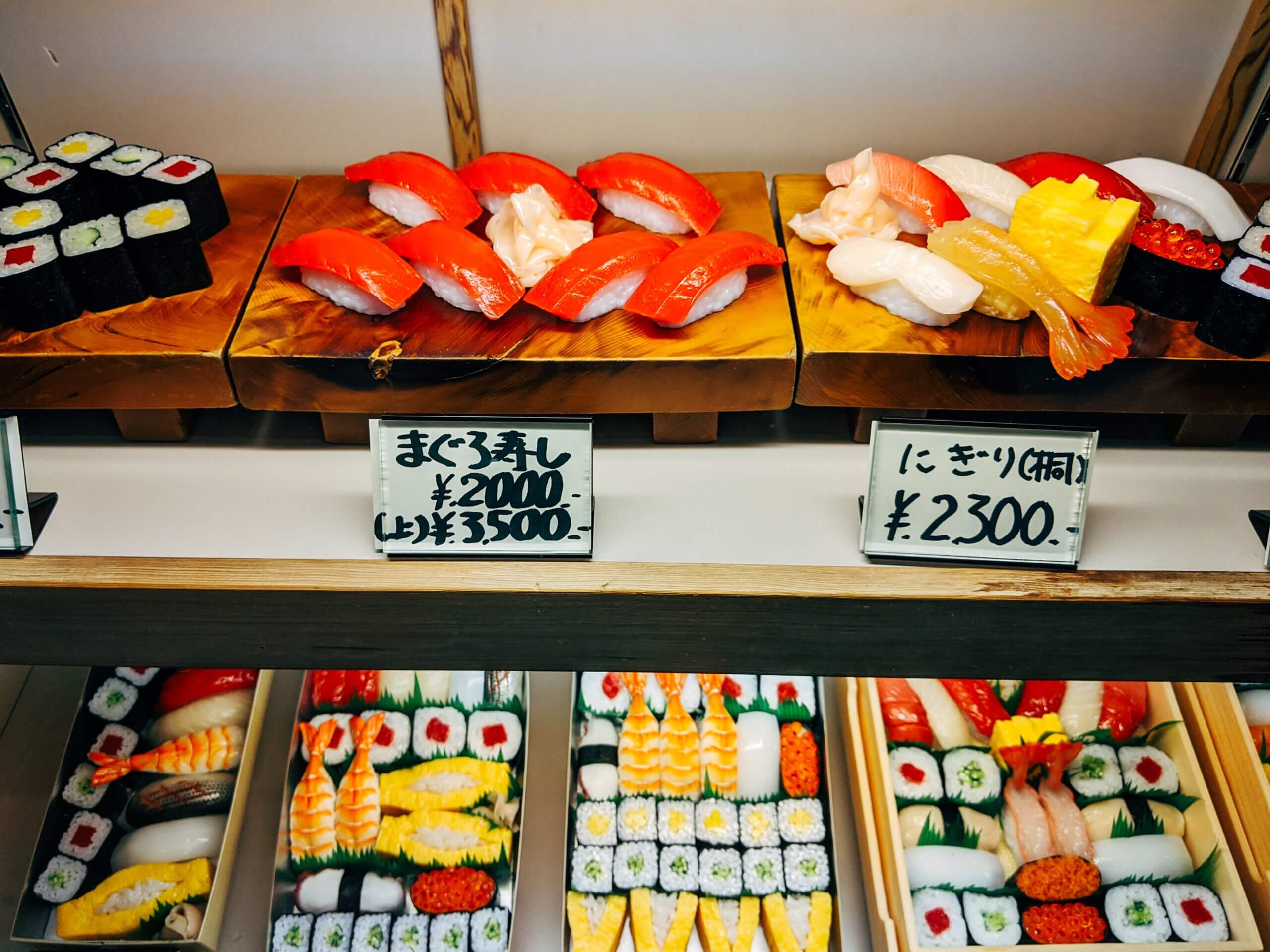 It is true that the concept of food replicas was originally conceived as a very accurately developed advertising strategy that was meant to be used by restaurant owners to attract clients. However, it is equally true that Japanese people ‘taste with their eyes’ long before they start eating. Plating, consistency, and colour of the food play an almost decisive role in their choices of food. In other words, in order for the replicas to achieve the best results, they have to look good enough to meet the Japanese standards of high visual aesthetics, but at the same time realistic enough to attract clients and not to disappoint them after the food is served.
Therefore, among other purposes food samples might have, let’s not forget that it takes a lot of skill and passion to attain proficiency in this area. For example, some designers claim that to become a ‘fake sushi’ master requires almost as much time as becoming a real sushi chef: approximately one decade. A single slice of ‘fake sushi’ can reach $25, and this is because of the extremely thorough process that is involved. Every rice grain has to be accurately moulded, mixed with adhesive, and then shaped by hand.
The whole process of producing ‘fake food’ can be considered, thus, a type of fine art on its own, and according to what specialists state, it is highly improbable that it will be substituted by computerised processes anytime soon. Replicas are handmade and their creation involve a process that needs human creativity mainly because machines are unable to establish what is ‘beautiful and appetising’. In this area there will constantly be a need for rigorously trained artisans and craftsmen that put dedication and effort into reaching the perfect balance between aestheticism and realism. 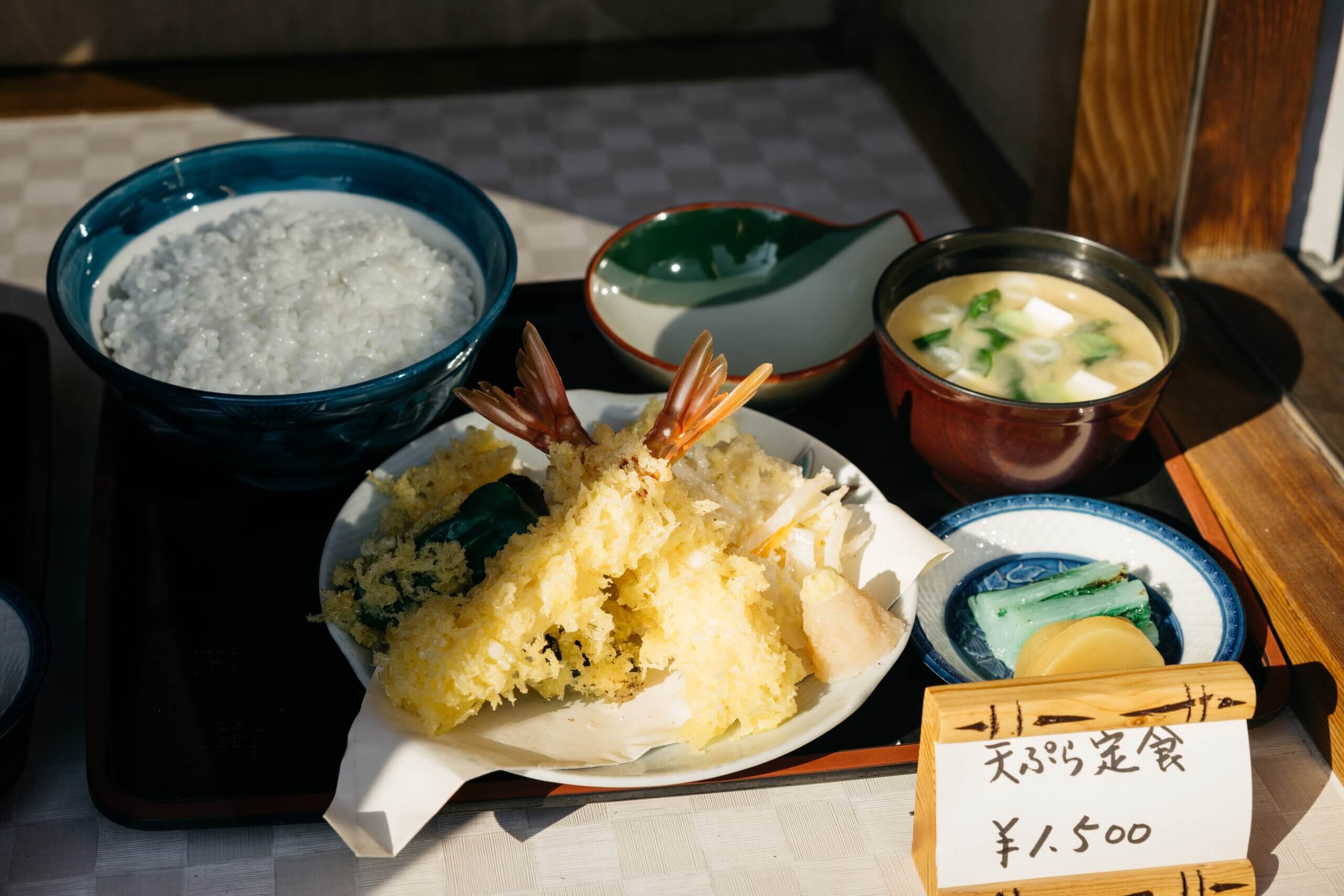 Replica of a Japanese meal
Source: Markus Winkler on Unsplash.

Now that we know that there is a lot of hard work behind what we see in the showcases of restaurants, let’s have a closer look at how sanpuru are made. When Takizo Iwasaki first came with the idea of creating food replicas, the material used for creating them was wax. However, these products were meant to stay for the whole day in direct sunlight. Wax and sun? Not the perfect combination! This is one of the reasons why starting with the late 1970s, once technology allowed it, the change to several types of plastics and eventually to resin and silicone became indispensable.
The process usually starts with the restaurants sending photos or actual samples of the dishes to the workshops. As most of the replicas are made using moulds, the food is first covered with silicone or pressed into a piece of silicone in order to set the mould, and once these are ready, the moulds are filled with polyvinyl chloride or liquid plastic and baked until they become solid. Finally, these are hand-painted or airbrushed, and then assembled into the entire composition. Other ‘fake’ dishes and foods rely on different techniques. For instance, for tempura or lettuce, melted plastic is poured into hot water, and then shaped or combined with other pieces by hand. Other dishes, such as ramen, are prepared using techniques similar to the actual cooking.
Regardless of the process involved, colouring seems to be the most important and difficult part. As mentioned above, the replica has to keep an appearance that looks tempting enough to be craved by potential clients, but at the same time realistic enough to imitate the texture and consistency of what people are going to be given.

Apparently, from simple onigiri rice balls, to huge bowls of ramen, and appetising tonkatsu pork cutlets, any type of food can be replicated in Japan. Nowadays, two names are mainly associated with the art of making food replicas: the town of Gujō Hachiman, where most of the ‘fake food’ industries are located, and Kappabashi Street in Tokyo, where a huge amount of plastic food, coming in all shapes and sizes, is sold everyday.
As for now, there is no doubt that the industry of plastic food is steadily advancing. In recent years, the industry has been targeting markets overseas, such as those in China and South Korea. At the same time, in Japan, individual pieces of plastic food are becoming more and more popular as souvenirs. Indeed, the plastic food industry started some time ago to collaborate with other industries and to produce jewellery, accessories, toys featuring replica foods. Just to list a few ones, you can come back from your trip to Japan with phone cases, keychains, magnets, pen caps, earrings, almost anything you can think of, all of these featuring some original ideas involving ‘food’.
For those who find this area fascinating enough, and are willing to spend some time in understanding what lies behind it, some producers have thought of new ways to sell ‘fake food’. This time it won’t be an actual food sample, but a DIY replica food kit that allows you to practice your skills at home. If you feel that this is still not enough, don’t worry, food replica making workshops are becoming more and more popular among tourists that want to have a unique experience in Japan.
After all, creating food replicas is similar to an apprenticeship. It takes a lot of time and even more passion to learn and master this art!