“Excuse me, do you only sell ceramics here?”

Vietnam
September 20, 2020
Small enterprise clusters in the sub-rural areas of Vietnam surprise with their seemingly counterintuitive but lucrative business logic. Unique skills, symbiotic collaboration patterns and market dynamics have often developed over centuries. But the face of clusters such as Bát Tràng ceramics village is changing, now more than ever in the light of resource exploitation, COVID-19 and the advent of technology. 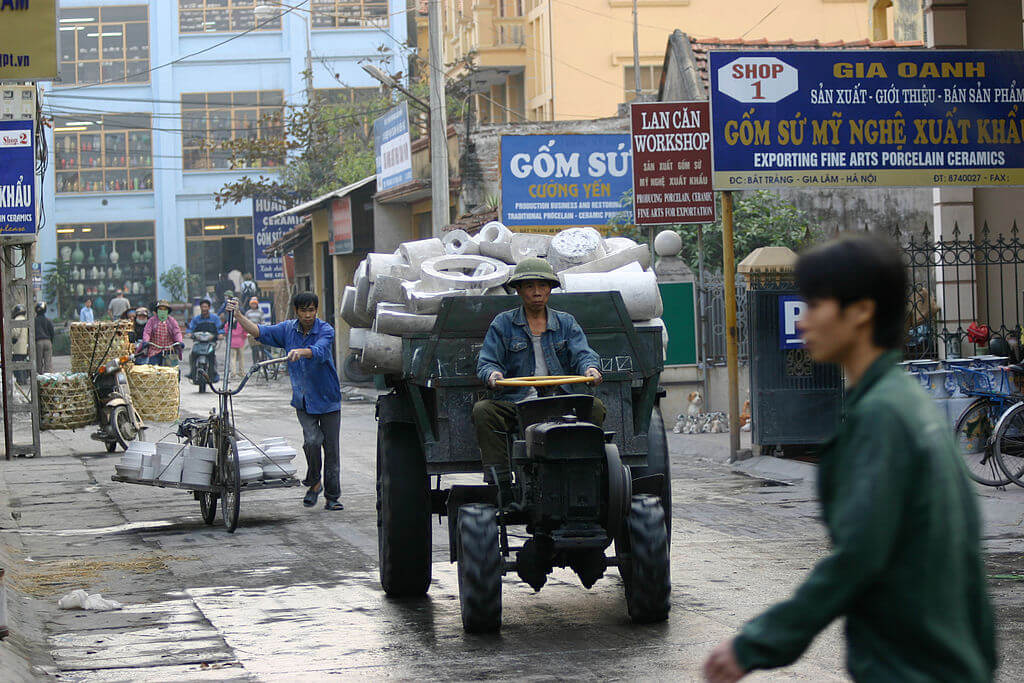 Transporting ceramics on the busy streets of Bát Tràng. Source: Steven C. Price / CC BY-SA, Wikimedia Commons
Intuitively, many among us might think: If you want to run a good business, don’t sell the same product or service as your neighbour does. Equally important, don’t sell the same to the same target group. And if you dare to do so, then at least find your ‘unique selling point’ - by making it cheaper, prettier or a lot better. Agreed?
Well, yes and no. Let us look at Bát Tràng village for example, situated approximately 13km southeast of Vietnam’s capital Hanoi. In fruitful years, the village's local enterprises exported goods worth $40 million. By doing what? In simple words, by producing and selling nothing but ceramics. Of course, product differences in shapes, colouring, patterns, glazes or purposes do exist, but they still belong to the same category: ceramics. And they are not only genuinely pretty to look at, but also high in quality and demand. How could such a puzzling business model develop?

If one case wasn’t curious enough, Bát Tràng is by no means the only village following this logic. In fact, there are more than 1000 of its kind in Vietnam.
The majority of Bát Tràng-type artisan clusters are located in the Red River Delta in the country’s North, not too far from Hanoi – such as Vạn Phúc Silk Village, Tây Tựu flower village or Đào Thục water puppet village. The names of these villages already hint at the fact that unique circumstances have often facilitated the existence of these regional clusters over decades and centuries, such as the abundance of certain natural resources, the proximity to ancient trade routes and high demand for specific trading goods. Sometimes their growth - or decline - was induced by more or less deliberate governmental interventions, and not seldom spontaneity and coincidence had an equal stake in the game.
In the case of Bát Tràng, crafters and traders settled in the clay-rich Red Delta region after the capital in Thăng Long had been relocated in the 10th century. Over time, the region’s ceramics evolved into popular trading goods for both the nation’s and foreigners’ elite. Between the 18th and 20th century, the region turned comparably dormant and lost its significance, but experienced new flourishing dynamics when Vietnam’s revolutionary Đổi Mới policies kicked in after 1986.

Demystifying the logic behind: Sharing is caring - as long as you are an insider

While the numerous household and small enterprises in different villages across Vietnam differ in the type of product they manufacture and offer, most of them are united in the underlying logic that constitutes their unique competitive capacities.
In these clusters, people live in highly collaborative systems where synergies are shared. Through the exchange of highly specialized skills and knowledge, acquired and passed on over generations, obtaining the toolkit and human resources for opening up and running a successful enterprise becomes less costly and resource-intensive. To outsiders the secrets to their craft are preferably kept – or sold to willing tourists in pottery workshops.
Nowadays, foreign travellers visit Vietnam with the intention to explore the unique historical heritage of these artisan clusters and to dive into the curiosity of Vietnam’s traditions. Hanoi’s local government has long been prudent enough to leverage this economic opportunity and utilizes this lucrative cultural tourism to upgrade its city brand.

Looking ahead towards sustainability, Covid-19 and smart tourism

The ongoing deployment of highly specialized industrial and touristic activities in one geographically concentrated area unsurprisingly demands its price across resilience, vulnerability and sustainability dimensions: the ever-same use of resources has vast impacts on the quality of soil, water and air. Such negative effects are further amplified by both over- and irresponsible tourism. On top of that, shortly reminding us that the world is still going through a pandemic, one might wonder how tourist and export-oriented sectors, that have long benefitted from globalization and trade, can secure their usual levels of income when the mobility of people and goods is basically on hold.
Of course, Bát Tràng’s traditional businesses have long begun to diversify their ways of earning income, for example by establishing cooperations with large multinational enterprises such as Ikea or Wal-Mart, or by opening up online shops, which might help to maintain orders at tolerable levels in turbulent times. But the question is, if even affluent customers really care about ordering non-essential, luxury goods such as Vietnamese ceramics when concerns over shrinking stocks of food, toilet paper or hygiene masks are probably more pressing. Surely, people come up with the most curious ideas these days while juggling between remote work, quarantine and keeping the kids busy at home. Listening to Bát Tràng’s villagers themselves, however, who had to make a full stop in their production facilities for a considerable period of time, their voices have been full with nothing but concern.
But long before the virus hit Vietnam change had already started. Since Vietnam’s enterprise clusters are vital for employment and tourism, they have become the focus of government efforts aiming to push for the adoption of Information and Communication Technologies. The hopes behind those efforts is to upgrade productivity and profitability, promote rural development and regional integration, as well as to help to secure access to new and larger markets. In highly integrated regions where everything is interdependent already, such policy efforts will translate quickly. Even smart tourism is on its way, and so are Wifi and electric cars. Undoubtedly, it will remain fascinating to observe how the face of Bát Tràng along with its fellow clusters in the Red River Delta Region will continue to change in these uncertain yet fascinating times. 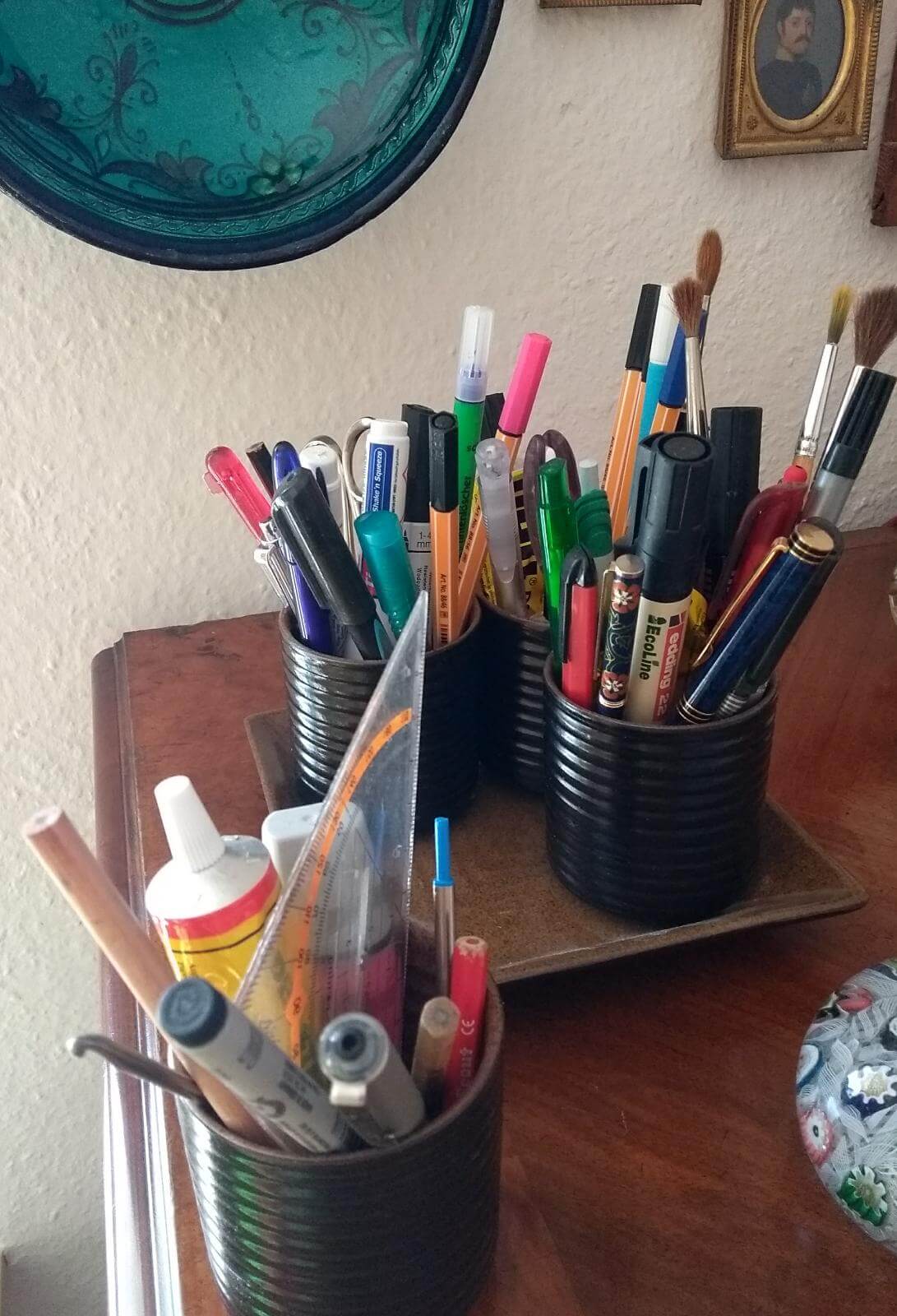 The author's souvenirs from Bát Tràng. Source: own.
[Author's note] Bát Tràng’s ceramics are exemplary for genuine artisanship. Even I couldn’t resist bringing a lovely teacup set home from my travels as a souvenir for my parents, carefully wrapped and protected with Vietnamese magazine leaflets and clothes in the suitcase during a 16 hours travel home. My parents were excited about this unique present and continue to appreciate its beauty, and even more its usefulness – by proudly presenting it on their working table to every visitor and showing off the pens and markers they have collected in them.