The old prostitutes of Seoul

South Korea
October 19, 2020
Once upon a time, Korean old ladies were guaranteed a serene old-age surrounded by the love and care of their families. Nowadays, Korean grandmothers are often abandoned, and only one resort is left to escape the “Big Bad Wolf” of poverty. Unfortunately, this is the happy ending–less tale of the Bacchus Ladies: old prostitutes hanging around the streets of Seoul. 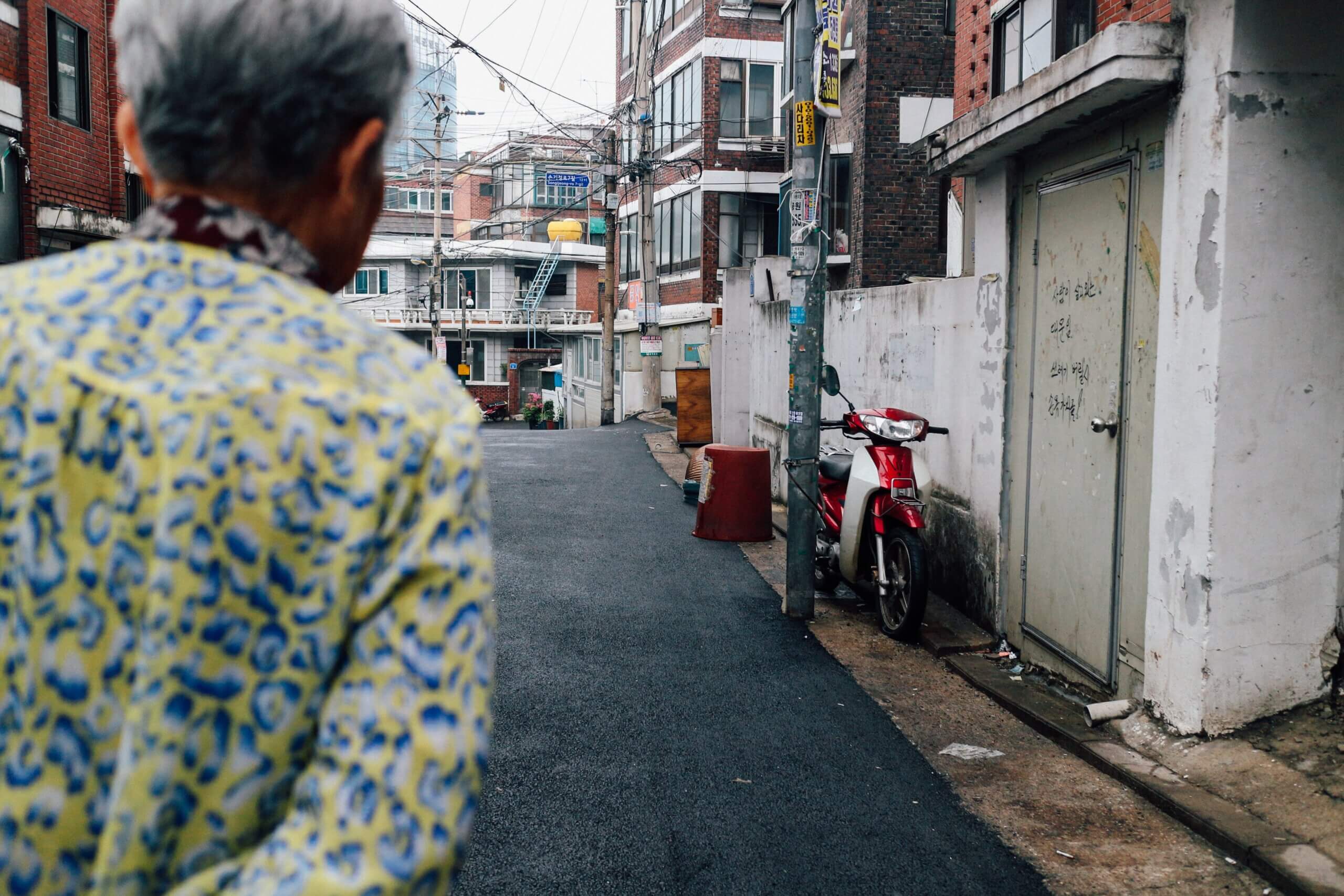 Street photography of a Korean old lady walking down a narrow street in Seoul.
Source: Saveliy Bobov on Unsplash
How many times have we listened to the story of Little Red Riding Hood? The fairytale about the young girl that walks through the woods to bring food to her old grandma, devoured by the Big Bad Wolf in one gulp?
Wanting to transpose this iconic fairy tale to the present day, one might take inspiration from the dramatic social phenomenon of the Bacchus Ladies taking place in South Korea and rewrite the story with the following elements: an absent family, a Big Bad Wolf that has the appearance of extreme poverty and an old granny that instead of being devoured by a hungry wolf, escapes hunger through the selling of a simple “energy drink”.

Bacchus is a fairly popular energy drink that crowds the shelves of every convenience shop in South Korea, commonly known and consumed for its presumed health benefits, as it is believed to cure colds and hangovers. What most people don’t know, however, is that in recent years this drink has been gaining a brand-new exposure in the local and international media, as it is being associated with the dramatic phenomenon of the Bacchus Ladies (박카스 할머니 or bakkaseu halmeoni in Korean).
The term ‘Bacchus Ladies’ refers to elderly female prostitutes – women over the age of 50 who sell sex in the Seoul area to make a living. Such a peculiar nickname is derived from the method these women commonly employ to approach their clients, which is selling a bottle of the homonymous energy drink in the parks and stations of the capital city.
Hunger and despair are the “pimp” of these women: difficult is in fact to make ends meet if senior citizens are not supported by a functioning welfare system. Bacchus Ladies are indeed women that do not receive enough financial aid by the South Korean government, and that thus turn to prostitution to keep the wolf from the door.
These prostitutes averagely charge  10.000 KRW (about 9 USD), although the fare might change depending on the service offered to the client. It is important to note, however, evidence about the prices drastically changes according to the source one refers to, as every reporter bases the information on individual interviews made with different prostitutes. By citing the reportage of the CNA Insider, for instance, we can observe that an old prostitute in South Korea can earn 30.000 KRW (about 27 USD) in exchange for sex.
Such low fares can be explained if we take into account the market this prostitution ring caters to. Customers of these poor, old women are indeed equally poor, old men who are looking for the human warmth of one of their own to remedy the loneliness. Left alone because of a loss or the signing of the divorce paper, these men are turning to prostitution to have the company of a lady that can supposedly understand what they are going through. Such connections frequently lead to a sexual act, but just as often end up in a simple chat over the hardships of old age.
It is likewise interesting to note how younger men are gradually showing more interest in the Bacchus Ladies, showing how such phenomenon is spreading in more strata of society. As reported by the Choson Ilbo, some young men in their 20’s were filmed while approaching old prostitutes and walking towards a motel arm in arm. It is believed that triggering the curiosity of these new clients was the great media exposure these old ladies received in the last years. 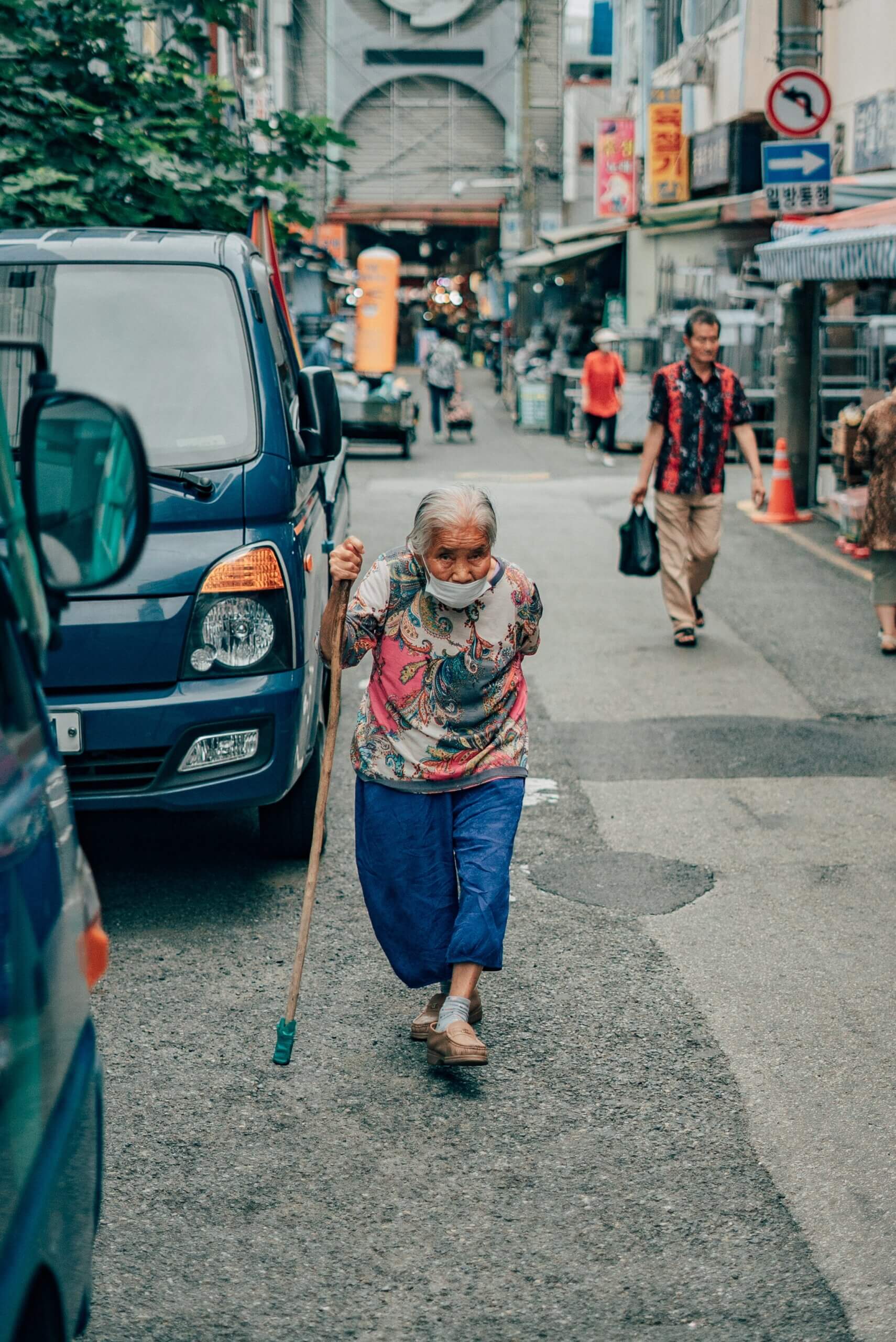 In our contemporary tale, the cruel beast makes its appearance in a new guise: the one of elderly poverty. The menace of Korean grandmothers are not, in fact, the traditional sharp teeth of the Big Bad Wolf, but the modern welfare system.
Elderly prostitution in South Korea is indeed indisputably connected to the economic and demographic crisis which has been affecting the Asian country in the last decades, one of the most evident consequences of which is a shockingly high poverty rate among the senior population. According to the figures, almost half of the Korean population aged over 65 lives below the poverty line, placing South Korea in first place for the highest elderly poverty rate among OECD countries.
Elderly poverty in South Korea finds its roots in a defective welfare system that does not provide old-age financial security. The onus of sustaining this rusty bureaucratic machine is placed on the National Pension Service (hereafter NPS). Introduced for the first time in 1988 and further extended in the following years until 2003, the NPS is a partially-funded system aiming to cover every contributing worker. However, due to a general mistrust in the system, coupled with tax evasion by self-employed and non-regular workers, the NPS does not cover a great part of the South Korean population, recording not even half of working-age contributors back in 2012. Moreover, due to its recent introduction, the majority of today’s pensioners could not adhere to the system, or did not do so because of financial ignorance or irregular employment. Back in 2013, only 29% of the old population received a pension from the national system, amounting to less than 300 USD a month due to the lack of contributive years before retirement, which made them ineligible for the full benefits of the pension system.
To make matters worse for the elderly poor is the Confucian legacy of family values, to which the pension system appeals to for the support of the senior citizens. The institutions indeed expect children to financially support their parents once they retire, and an elder who has been proven to maintain close ties with their immediate family might not be eligible for welfare benefits. However, filial piety and Confucian culture are not as prevailing in contemporary Korean society as they were in the past: modernization and economic hardships have indeed transformed family structures and spread individualism. It is not just about unfilial children who do not want to, or cannot, support their retired parents – the elderly themselves refuse this kind of economic help. An illustrative figure is one of old citizens living with their family: in the 1990s, around 75% of the old population belonged to this category; however, just a decade later, this percentage fell to 30%, thus indicating the determination of the elderly to be independent from their children.It is thus evident that the South Korean elderly fell victim to a system that failed to keep up with the times and to conform to new social and economic contexts.
Thus ends the tragic tale of the Bacchus Ladies, old grannies that instead of being saved by the hunter, must rely on on the world's oldest profession to get away from the wolf of poverty. This sad epilogue calls for institutional change, which could allow these poor women to live a serene and dignified old life.