China, Indonesia, Japan, Laos, Myanma
February 3, 2021
A military coup in Vietnam! Leadership turnover in Laos and the CCP's planning for the Lunar New Year. Indonesia's plane crash. And Tokyo Olympics: YES or NO? 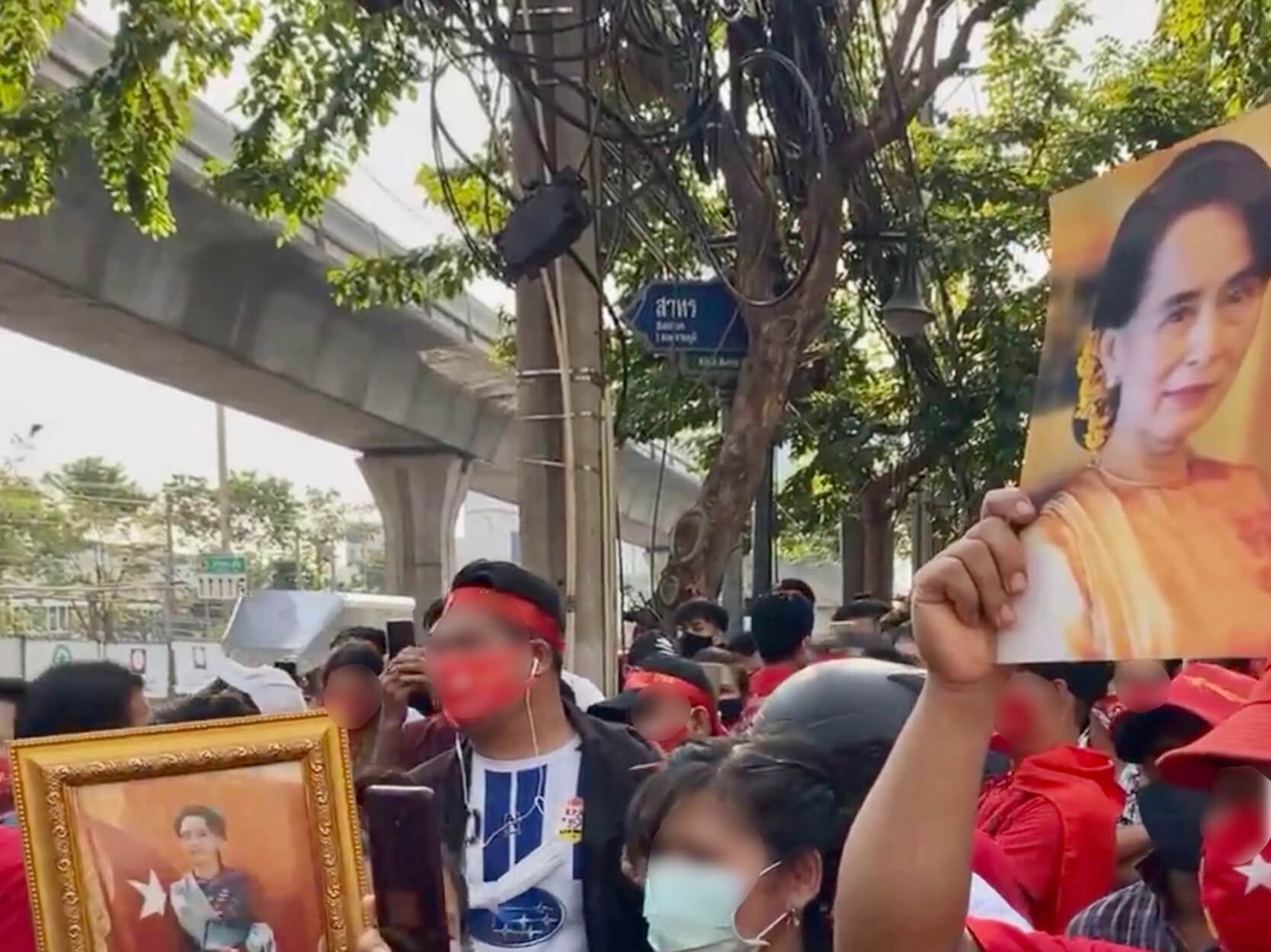 Protests against the Myanmar coup in Thailand,ซาร่า สาขาสาทร, CC BY-SA 4.0, via Wikimedia Commons

In the early morning of Feb 1st, after detaining former State Counsellor Aung San Suu Kyi and other high ranked government officials, the Tatmadaw (military) seized control in Myanmar. Originally reserved for the president according to the 2008 constitution, the military declared a state of emergency to be upheld for the next 12 months. Internet and media services are currently restrained in vast parts of the country, while troops are patrolling the streets and a night curfew has been put in place.
While the happenings are hard to grasp for many, they must not come by complete surprise as an unresolved dispute on alleged voting fraud linked to the previous November 2020 elections had already nurtured smoldering political tensions. After the National League for Democracy (NLD) had secured another landmark victory, first parliamentary sessions were supposed to be held on Feb 1st. The Union and Solidarity Party (USDP) and the Tatmadaw, however, refused to support the results and had unsuccessfully urged the Union Election Commission (UEC), an independent body responsible overseeing voting procedures, to investigate more than 8.6 million voting irregularities in 314 townships. The UEC claimed that no firm evidence had been brought forward, and showed itself hesitant to initiate in-depth investigations. As a consequence, military spokespeople have sent repeated messages containing mixed signals that lead many to believe in a potential coup.
Ascribing the coup to an unresolved voting dispute alone, however, might not do Myanmar’s complex socio-political and ethnic-sectarian realities justice. Long before the November elections, the military had already presaged that any poll results must and will be consumed with skepticism as Aung San Suu Kyi’s government had committed a series of “unacceptable mistakes” during her first legislative period. Additionally, several sources support that personal economic and political ambitions of military chief General Min Aung Hlaing played a pivotal role in the coup as well. Lastly, the small-step but globally celebrated or even romanticized progress towards democratic transition over the past years might have overshadowed the historically grown, and partly colonially imposed, fault lines and cleavages that have long stirred civil conflict in Myanmar––what the ongoing Rohingya conflict is vivid proof of.
In response to recent developments, internal protests have been on the rise, while the streets at this very moment are claimed to be calm. Several testimonies declare that large parts of the citizenry is filled with frustration and anger, while there might also be smaller parts that advocate the power shift. One Twitter account has more or less documented the coup in real time from a personal perspective. The International Community, at the forefront the US, UK and the United Nations, condemn the happenings—while Southeast Asian neighbours and China have so far refrained from harsh criticism.

With less than six months left until the opening ceremony of the 2021 Tokyo Olympics––scheduled for July 23––speculations over a second postponement have stirred up concerns in Japan and abroad.
After ‘The Times’ newspaper published a report suggesting that high officials close to Prime Minister Suga were considering calling off the games and securing them for the next available slot in 2032, the government promptly rejected these allegations and reiterated its commitment to hosting the event as planned. This stance was fully endorsed by Thomas Bach, head of the International Olympics Committee, who ruled out the possibility of another postponement and uttered that ‘’there is no plan B’’. Yet, he could not assure that games will be held at full capacity with cheering crowds packed in the venues. Bach added that the Committee would always prioritize safety, while refraining from obligating athletes to get vaccinated. However, experts seem fairly divided on the issue: some have endorsed Japan’s unwavering will to hold the Olympics, while other key members of the IOC have cast their doubts over this possibility.
The adamance of the IOC and the Japanese authorities has thus far shown little resonance among the general public. According to an opinion poll conducted by NHK in January, almost eight out of ten respondents are in favour of either postponing or canceling the games for good, compared to less than six out of ten in October.
Japan has experienced a rapid surge in COVID-19 cases in the last month, which prompted the government to declare a state of emergency in some of the hardest-hit prefectures. On top of that, the country’s delays in the vaccine roll-out, combined with an historical skepticism towards vaccinations, has fueled uncertainties over the real possibility of allowing thousands of people into the country for the games in the summer. As Japan’s Olympic sponsors have begun scaling back their operations, if there is one thing we know, it is that more is yet to follow.

Several localised coronavirus outbreaks in China are worrying authorities ahead of the Spring Festival and the New Year (12 February), a period which usually sees billions of trips being made across the country.
The latest outbreak began in early January in north-eastern Hebei province, which surrounds Beijing. Despite swift responses, the outbreak appeared to spread to the nearby provinces of Jilin and Heilongjiang. Coming so close to the Spring Festival mass homeward-bound migration period, this new outbreak has provoked concern of a repeat of last year’s “superspreader” event – when the same mass migration contributed to the spread of COVID-19 in the first place.
A concerted effort is underway at all levels to dissuade travelling. While the government has set up a working group, schools are staggering their timetables. Border controls—strict since early 2020—continue to be tight, with both negative test and quarantine requirements. Some cities and workplaces are offering cash bonuses, free food, and other trinkets to get their residents and workers to stay put. Red banners hung up around city neighbourhoods—a classic tool of governmental communication in China—bear short messages saying that travelling home and putting parents at risk of catching the virus could be unfilial.
With the World Health Organisation team examining the origins of the coronavirus newly arrived in China and drawing attention back to Beijing’s handling of the outbreak, the Chinese government is likely to see both big risks in getting this wrong, and even some reward in getting it right.

On 9 January 2021 Sriwijaya Air flight SJ182, a domestic passenger flight between Jakarta and Pontianak, crashed into the Java Sea shortly after take off. All 62 people on board were killed in the accident. The plane took off from Jakarta's Soekarno-Hatta Airport at 2:36 p.m. and went missing at 2:40 p.m, only 4 minutes into the flight. The plane suddenly turned northwest shortly after take-off and dropped from 10,900 feet to 250 feet in less than one minute. After this point, no other data was received from the aircraft.
The incident contributed to the worsening Indonesia’s flight safety reputation as it came after two other major aviation disasters: Lion Air Flight 610 in 2018 and Ethiopian Airlines Flight 302 in 2019, when 189 and 157 people died, respectively. However, unlike the previous two accidents, where the aircrafts involved were both of the Boeing 737-Max variety, the Sriwijaya Air Flight 182 was a Boeing 737-500 that did not use the new and controversial MCAS system.
Because of the air travel restrictions caused by the COVID-19 pandemic, the aircraft had been grounded for approximately 9 months. It resumed its flights on 19 December 2020, going on to conduct 132 flights until the crash. Sriwijaya Air President Director Jefferson Irwin Jauwena mentioned in a news conference that the 26-year-old plane had already made four journeys earlier on the same day and that its take-off had been delayed due to bad weather.
According to investigators and black box data, auto throttle issues on one engine might have contributed to the crash. However, there is no regulation that forbids airplanes to fly without a functioning auto throttle, as this can be manually controlled. The cockpit crew failed to declare any emergency or declare technical issues.
Indonesian authorities are currently investigating data from the flight-data recorder that was found shortly after the accident, but they are still looking for the cockpit voice recorder in order to have a clearer perspective.
A preliminary report is expected around 7 February, within 30 days of the crash.

Laos Prime Minister Thongloun Sisoulith has been chosen as the new secretary general for the Communist Party of Laos, replacing retiring party leader Bounnhang Vorachit. Thoungloun, who is currently 75 years old, was elected to serve a five-year term as the head of the Lao People’s Revolutionary Party Central Committee, the top post in the country.
The party congress has also elected 13 members of the country’s top political body, the politburo, as well as 71 party Central Committee members.
Besides being the prime minister of Laos since 2016, Thoungloun was the country’s former foreign minister. He has appeared as the face of the country at international events and summits, and has also given addresses to the United Nations General Assembly. Furthermore, Thoungloun is a veteran of the old guard of the Lao People’s Revolutionary Party.
However, as Thongloun now takes over as secretary general, he has many challenges in front of him. The country has a fragile 18 billion dollar economy and is currently facing many difficulties due to a probable debt default, which is what happens when an amount of money has been borrowed but the loan is not paid back at the time it is due, in addition to the worldwide impacts of the coronavirus pandemic.
Thongloun has introduced an outline of a new five-year socio-economic plan, which aims to reach an annual economic growth of 4% until 2025, and also has the goal to reach an annual average per capita income of $2,887 in 2025. More than 7 million people currently live in Laos, and according to data provided by the World Bank, the country’s annual per capita income now lies at just over 2,500 USD.