A Flower in the Shade: the History of Horimono

Japan
March 22, 2021
The growing arrival of tattooed tourists to Japan is profoundly influencing the way in which Japanese society perceives them. Therefore, granting horimono an opportunity to detach from the negative connotations that it has carried since the 19th century, and to be re-interpreted as an important element of Japanese cultural heritage. It is said that ‘the world is divided into two types of people: those who have tattoos, and those who are afraid of people with tattoos’. To which group do you belong? 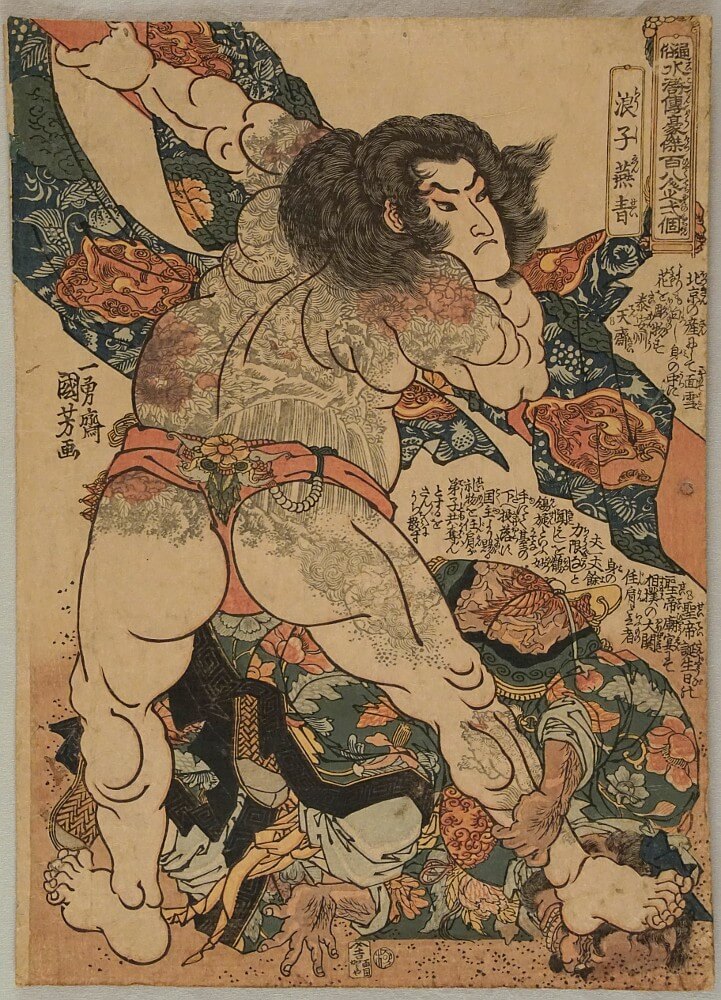 ‘One Hundred Eight Heroes of Suikoden’ (Tattooed Hero Roshi Ensei [Yan Qing])
Kuniyoshi Utagawa (1797-1861)
Until recently, it was common to find posters in Japan that read ‘Tattooed people are not allowed’ at, for example, the entrance of swimming pools, traditional Japanese hot springs (onsen), or beaches. While there are several reasons that explain such reactions, the main one is caused by the stereotyped perception that exists within Japanese society about the tattoo as a hallmark of the Yakuza, the preeminent organized crime syndicate in the country. Nevertheless, this ‘deep-rooted sentiment against tattoos’ was called into question in 2019 when, on the occasion of the celebration of the Rugby World Cup, the number of international visitors to this country reached a historical record. Therefore, giving rise not only to controversial debates about whether such restrictions should be eliminated, but also encouraging Japan to do a thorough reassessment of their own traditional tattooing culture, known as Horimono.

Emergence, Rise & Marginalization of the Horimono

Although different studies place the first traces of tattoo practice in the Japanese archipelago back to the Jōmon (10.000 B.C - 300 B.C) and Yayoi period (300 B.C - 250 A.D), it is not actually until the Edo period (1603-1868) when what we understand nowadays as traditional Japanese tattooing or Horimono came into existence. Nevertheless, precisely why and how this kind of art expression appeared remains unresolved.

The Edo period stands out in Japanese history for the peace and political stability that the country lived with, accompanied by economic growth. The first tattoo types that we can find during the early centuries of this period are the pledge tattoos known as irebokuro and kishobori, and the penal tattoos or irezumi. Irebokuro, in its literal meaning ‘insertion of a mole’, and later kishobori or ‘vow tattoo’, were tattooing practices that enjoyed wide popularity among lovers, prostitutes, geisha (sophisticated professional entertainers) and their paramours or clients who wished ‘to express a pledge of their love’. The first of these consisted of a simple mark resembling a dot or a mole that both lovers tattooed between the base of the thumb and the forefinger. With the passage of time, this mole evolved into a more complex design in the form of Japanese characters that were tattooed on the inside of the arm (kishobori). 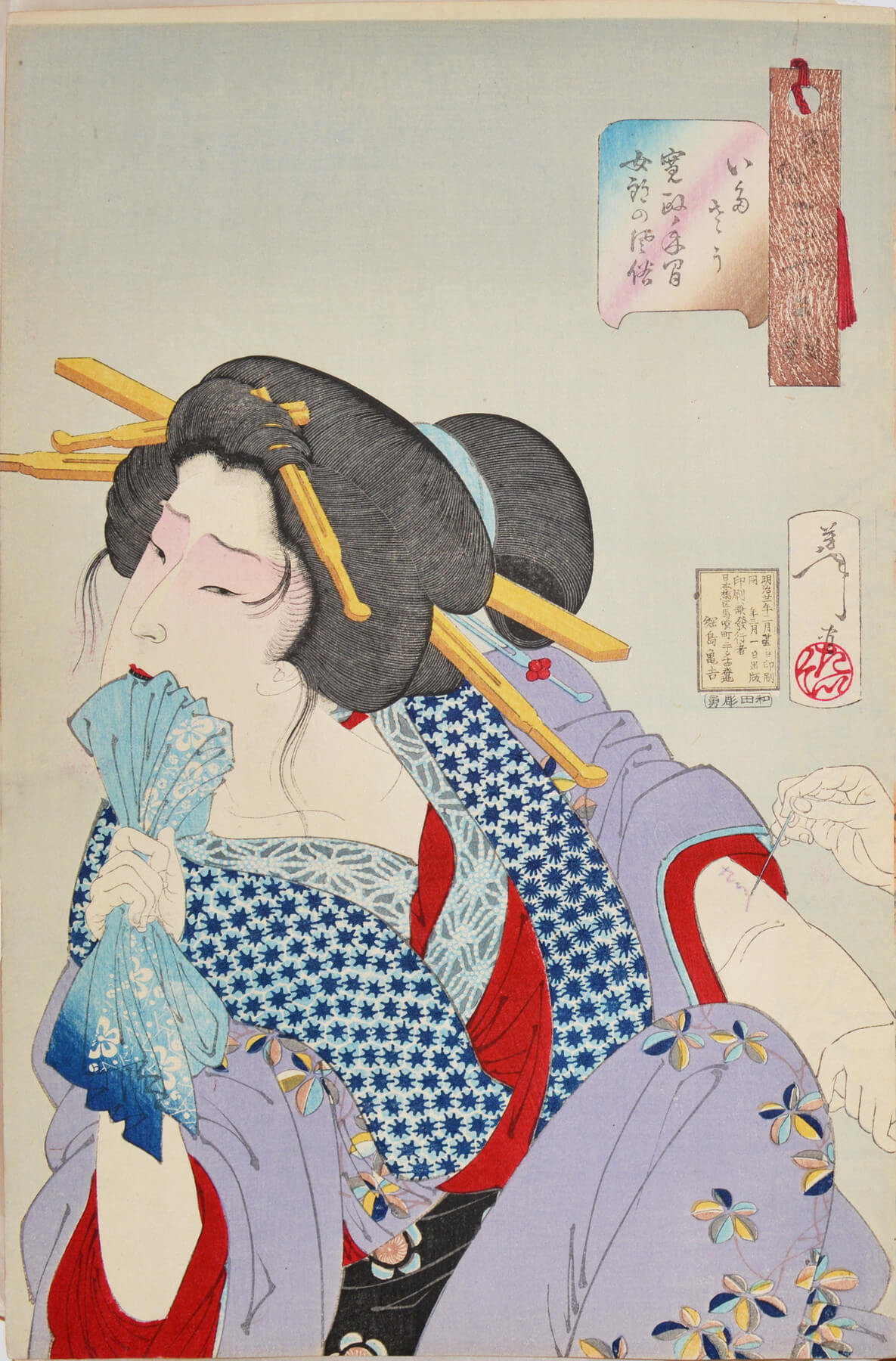 Painful: The Appearance of a Prostitute of the Kansei Era (1789 - 1801)
Yoshitoshi Taiso (1839-1892)
Regarding the use of the tattoo as a mark of punishment, irezumi (‘inking’), according to the notes of Von Siebold (1796-1866), consisted mainly of black and broad stripes that were made both in the lower or in the upper part of the criminal’s arm, or a Japanese character that was tattooed in the center of the forehead. This model of punishment fit perfectly with the Neo-Confucian mentality that governed the social and political life of the Edo period. One of the main pillars of this philosophy imported from China is ‘filial piety’. This concept can be summarized into the respect and loyalty that children must have for their parents as a show of gratitude for having brought them into the world. However, such respect also includes regard for one’s own life and body since these were understood as gifts from your parents, ancestors, and heaven. Thus, the tattoo was not only seen ‘as an indication that the person in question had come up against the law and therefore others must be wary of him’, but also as a reminder to the delinquent that in committing the crime, he has dishonored his family. Although this punitive practice fell into disuse at the beginning of the Meiji period (1868-1912), this Neo-Confucian mindset is still alive within modern Japanese society. In fact, Gamborg points out this ‘intrinsic Neo-Confucian thought’ as one of the main causes of the negative view of tattooing in Japan.

Going back to the Edo period, at the end of the seventeenth century a transition took place from this type of small-scale marks to more sophisticated and larger tattoos that eventually gave rise to horimono after the middle of the eighteenth century. As mentioned earlier, precisely what spurred this change remains unclear. However, it seems that this was possible mainly due to three factors: the emergence of a cultural flourishing promoted by the long period of peace and the economic growth, the appearance of the artistic discipline Ukiyo-e (Japanese woodblock prints), and finally the Japanese translation of the Chinese novel Shui Hu Zhuan.

In the eighteenth century, the Chinese classic novel called Shui Hu Zhuan (‘The water margins’) was published in Japanese under the title Suikoden. This novel, set in the Song dynasty of China (960- 1279 A.D), narrates the adventures of a group of 108 outlaws that meet on Mount Liang and decide ‘to fight against the wealthy and corrupt government bureaucrats’. These characters become heroes who fight for social justice by embodying virtues such as kindness, courage, loyalty, and honor. Several of these heroes appear in the illustrations of the original novel with their bodies tattooed with various decorative designs such as blooming flowers. The book became quite popular amongst the people of all social strata, particularly grabbing attention from ukiyo-e artists. Although in the Chinese original only a few of these heroes appear simply tattooed in a modest way (on the back part of their bodies or on the shoulders and arms), in the Japanese print version and in the ukiyo-e series most of the protagonists are illustrated with increasingly complex tattoos that cover almost their entire body. Numerous authors point out these illustrations of the heroes of the Suikoden as the true germ of the traditional Japanese tattoo or horimono.

Thus, from the middle of the eighteenth century we find the first horimono tattoos known as ‘full body suits’, which practically cover the entire body and, in a way, remind us of those tattoos that the Suikoden characters wore. However, it is considered that it is not really until the early nineteenth century, when the canons of the composition of this new tattoo art are defined, canons which have lasted down through the present. This is mainly due to the publications of two fundamental works: The picture book called ‘Collection of the pictures of the heroes of Suikoden’, designed in 1829 by the great artist Katsushika Hokusai (1760-1849); and the woodblocks print series ‘The hundred and eight heroes of the Suikoden’, made in 1827 by another famous ukiyo-e master, Utagawa Kuniyoshi (1798-1861). These illustrations are still used nowadays as inspiration by horimono tattoo artists.

Alongside the spread of the ukiyo-e pictures, ‘tattooing became widely popular, particularly among the working class, and the tattooed body was considered as stylish as the flower of the Edo’. Besides commoners, different criminal gangs such as the Otokodate (chivalrous street-knights) that had found in these rebel heroes of the Suikoden traits with which they identified, also adopted the custom of tattooing as proof of loyalty and commitment among its members. Modern Yakuza, which consider themselves descendants of these groups, inherited this tradition as a hallmark and symbol of their pride and status.

Nevertheless, the change of era dealt a hard blow to the tattoo culture in the Japanese archipelago. Along with the Meiji Restoration (1868-1912), the beginning of the country’s modernization also arrived. As a consequence of the opening up of the country and its westernization, the way of life of the Japanese people changed and with it, how tattoos were seen. In 1872 the Japanese government, deeply concerned that foreigners would find the practice of tattooing as something unpleasant and barbaric, enacted a law through which tattooing was forbidden. Paradoxically ‘the western influence consequently led to the secretive practice of Japanese tattooing’. It should be noted that this prohibition on tattoos not only affected horimono, but also cultural tattoo practices of the Ainu and Ryūkyū populations, whose territories were annexed by the Japanese empire during the nineteenth century.

Despite the government’s attempts to eradicate tattooing practice across the archipelago, it did not completely disappear, but rather continued to be practiced underground, ‘where it has remained until the present day’. Even though the prohibition of tattooing was lifted in 1948, due to their background, tattoos have acquired a dark and negative connotation that endures within the modern Japanese society to this day. Thus, horimono that had been admired and considered ‘the flower of Edo’ in the past has now become ‘the flower in the shade’ of Japanese heritage. 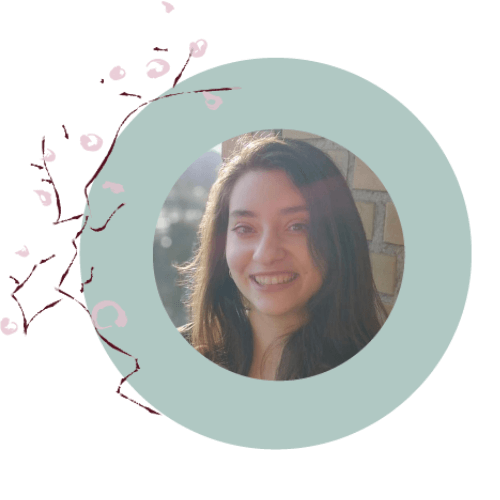