Mirror mirror on the wall, who is the most oppressed of them all?

The contemporary tale of Gender Wars in Hell Joseon

South Korea
March 8, 2021
In the era of the Internet and neoliberal economy, gender wars are raging in South Korea. Officially begun in 2016 with the tragic Gangnam Murder, these wars are recruiting youths to confront the opposite sex on both online and offline battlefields, where social resentment and sharp words are wielded as weapons. But to have a deeper understanding of this raging hostility, a concept rising from the depths of the internet needs to be studied: that of Hell Joseon. 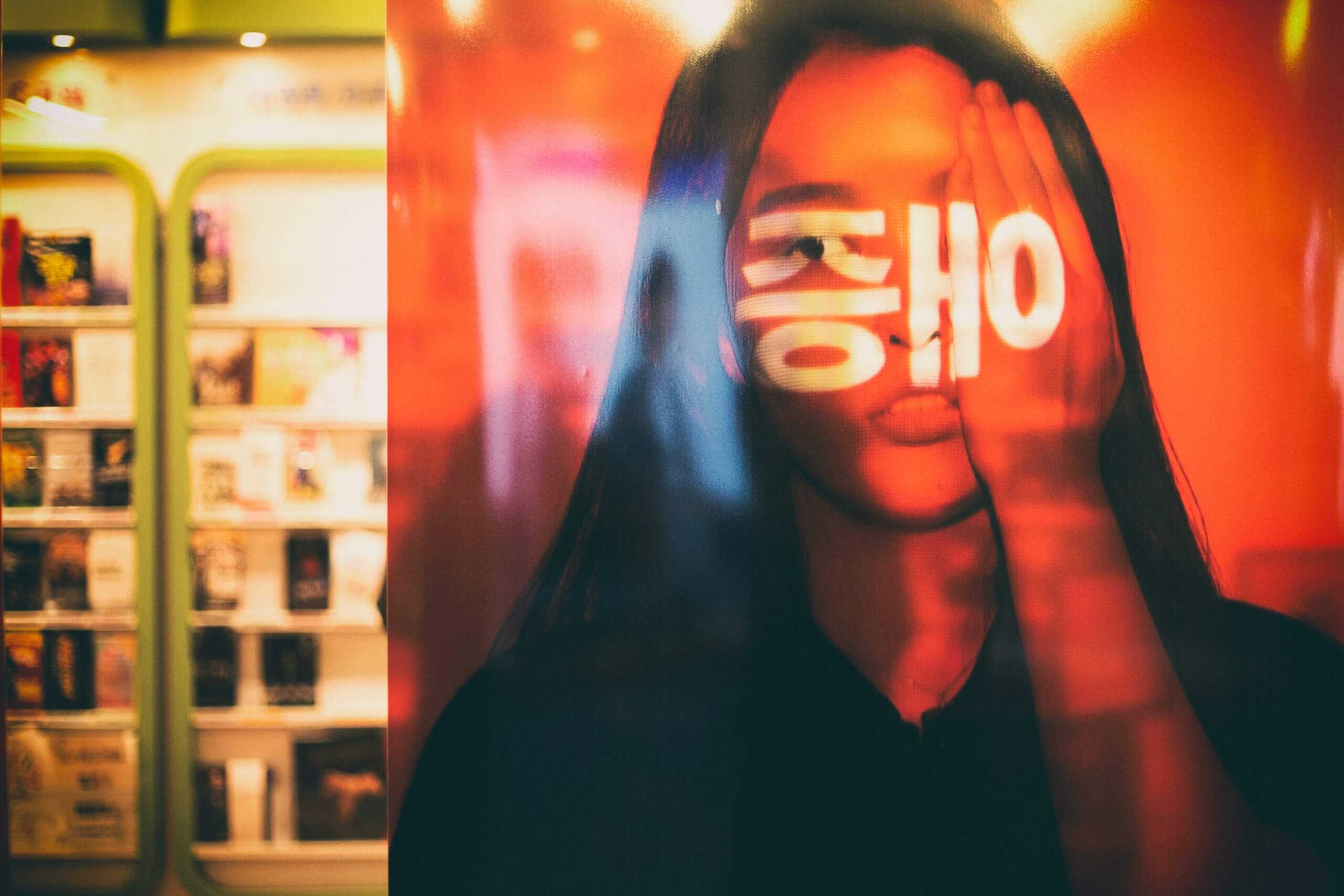 애증 (ae-jung) is a Korean term that is commonly translated as ‘love and hate’, but in some contexts it can also gain the meaning of ‘ambivalent’.
Source: Jisu Han on Unsplash.
17 May 2016.
The corpse of a young girl is found in a public toilet in the proximity of Gangnam station, stabbed to death by, supposedly, a stranger. A few days later, Kim Sunmin testified as the perpetrator of the crime, admitting he had never met the victim before the fateful night and revealing the murder was due to his frustration of not being able to date a woman, arguably establishing the murder as an incidence of gender-based violence. This stance was not, however, shared by Seoul’s High Court, which dismissed the case as a motiveless crime by appealing to Kim Sunmin’s mental health issues.
The Korean feminist association Megalia, which until the murder had only operated through its online forum, encouraged users and supporters to gather in front of Gangnam subway station as a sign of protest and respect for the murdered woman, denouncing the rampant misogyny and the lack of gender rights they perceived in South Korean society. The mobilisation, however, riled the users of the antagonistic Ilbe Storehouse community (a male-exclusive, far-right online forum with gendered hate-speech), which led to offline discussions between the two parties in front of the station, officially marking the start of the so-called “Gender Wars” in South Korea.
The described events consequently initiated a rip-roaring wave of feminism in South Korea. In consequence, public awareness of the hardships Korean women have to face in a country that registers, for instance, high rates of femicide and domestic abuse, as well as the largest wage gap in all OECD countries (amounting to 32.5% in 2019) increased. These feminist developments, however, have been demeaned by a horde of angry internet users who counter with chauvinist discourses on online forums and social networks, and endorse the contention which sees men as the real victims of the Korean sexist society. In other words, Gender Wars are nothing more than a social phenomenon resulting from a widespread sense of male frustration and disorientation brought on by the alteration of traditional society and its expectation.
Amongst these myriad sparks behind the fire of the gender wars in South Korea, the flammable tinder— that is, the economic and social background affecting the lives of Korean youths—demands inspection. This war-inducing context can be epitomized through 헬조선 Hell Joseon, a concept that emerged from the depths of the Korean Internet commonly used to describe the country and its oppressive society.

On the edge of the Asian landmass, surrounded by enemy waters once sailed by fearsome invaders and confining with the sinister reign of the Kim dynasty; there is a wicked land that extends below the 38th North Parallel—commonly known as South Korea. Satirically referred to as 헬조선 or ‘Hell Joseon’ by its youngest inhabitants, this land is the native soil of a new generation of ill-fated subjects, doomed to be born and raised in a fiercely competitive society, where failure, offbeat life paths, and social mobility are in no way contemplated.
Describing such an infernal place is no easy feat. However, the symbolic illustration provided by @Yazawa_Miho_ on Twitter may ease the process. 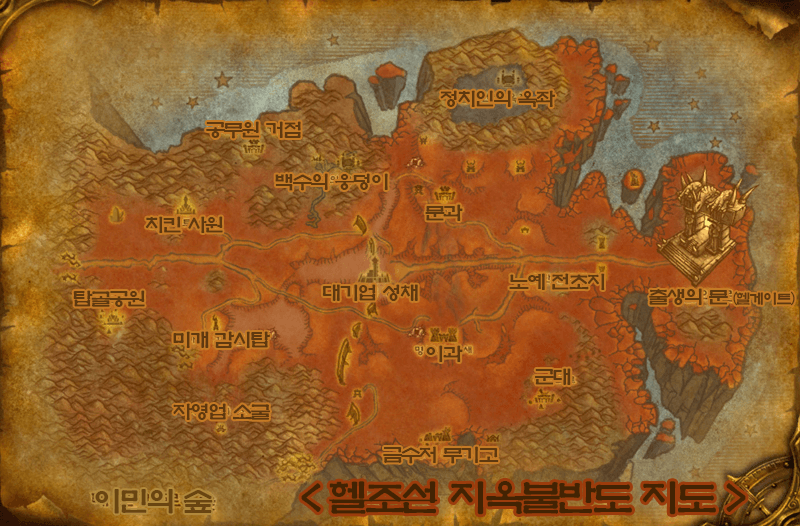 헬조선 지옥불반도 지도 “ The map of Hell Joseon, the infernal peninsula”
Source: @Yazawa_Miho_ on Twitter
According to the map, which must be read from right to left, the woeful journey of Korean subjects starts at 출생의문, the Birth Gate, which enslaves this hapless generation into a highly regulated system that dictates every aspect of their lives. Subjects are first subjected to an onerous education system – 노예 전조지 the Slave Outpost – in preparation of the suneung exam that determines their academic and working future; and later to 군대 the Military, for which all able-bodied adult male citizens between 18 and 35 years old must serve for at least 21 months. After subsequently completing university education – either in 문과 Humanities and Social Science or in 이 과 Science and Engineering, the ultimate goal for the young denizens is to serve the mighty 대기업 성채 Large Corporations, which rule over Hell Joseon from the heart of the peninsula. However, due to an increasing level of youth unemployment rate—currently around 11.2%—Korean youth are forced to reroute towards 공무원거점 the Fortress of Bureaucracy or the 자영업소굴 the Lair of Self-employment, in order to escape the 백수의웅덩이 the Pool of Joblessness.
Hell Joseon is therefore depicted as a land of oppression and social constraints, in which the youth feel betrayed by a society that first nourished and then broke the promise of employment in big corporations.

The antiheroes of gender wars’ tale: the male Korean youth 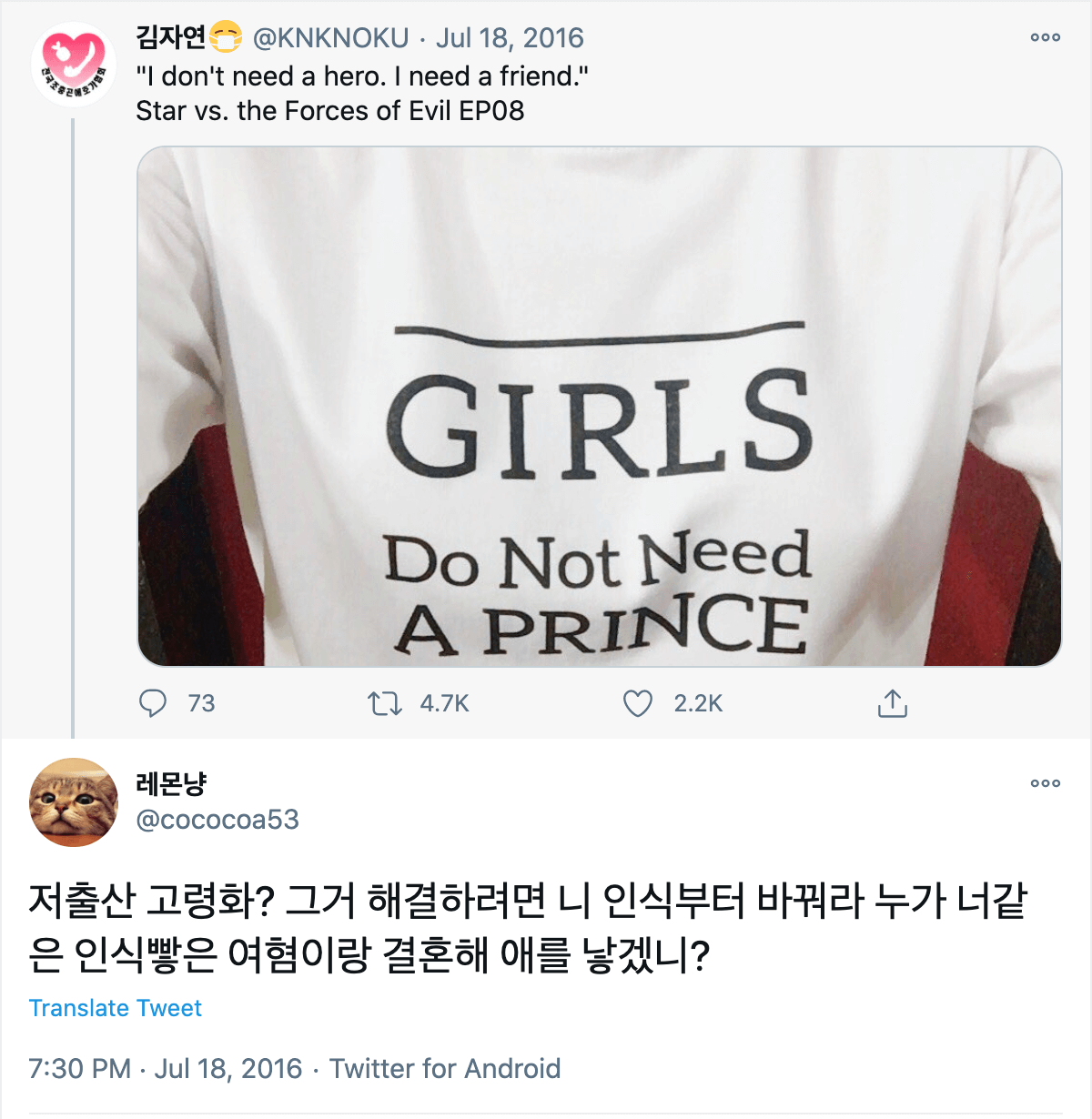 Translation of the tweet: “Low birth rate and ageing population? To solve that, change your perception first. Who would marry and have a baby with a woman like you?”.
Lee Dokyung is another victim of online misogyny. Guilty of claiming that 180cm is an ideal height and that shorter men are ‘losers’ during a tv broadcast, the girl was inundated by a wave of online hatred. The girl was nicknamed ‘루저녀’ loser nyeo (i.e loser girl), and some internet users gave justice to their evident wounded pride by posting her personal information and other private data, condemning the girl to the shaming rack through dedicated feeds on online forums. Such reaction, other than highlighting the male suffering caused by objectification, it likewise reflects the aforementioned fear of Korean men in failing to form a family due to social changes that now see women as active and critical protagonists in the search for a partner. 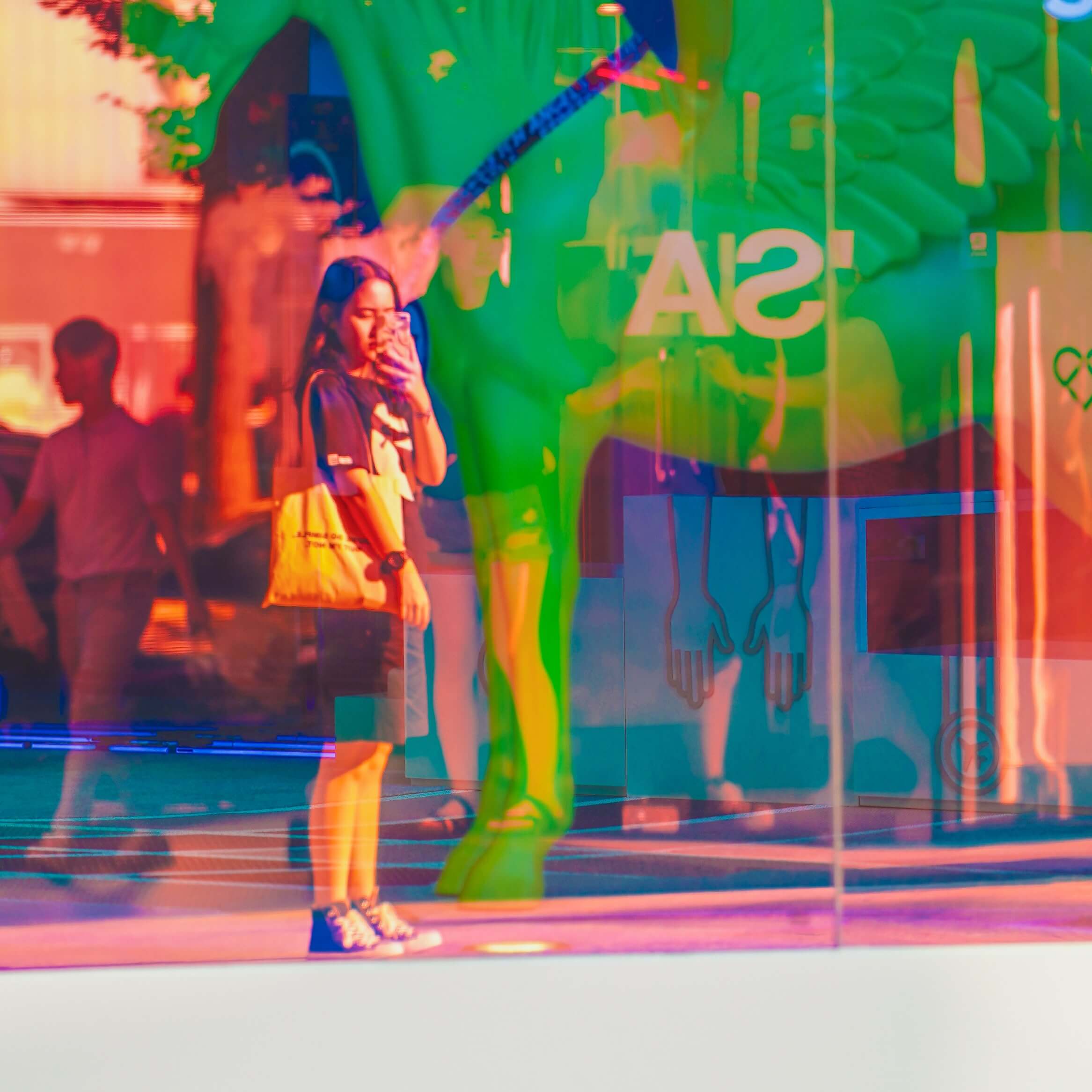 Source: Sunyu Kim on Unsplash.
In this context, it is interesting to point out that there is a whole range of existing misogynistic nicknames that Korean male netizens (i.e internet users) have been giving to women, who are in turn being criticized for setting new and undesired standards on potential boyfriends and husbands.
If ‘loser girl’ referred to a specific individual that dared to offend men based on a physical trait, other nicknames such as ‘된장녀’ doenjang-nyeo (soybean girl) and ‘김치녀’ kimchi nyeo (kimchi girl) were designed to stereotype and stigmatize entire groups of women. While both nicknames are used to describe girls deemed to be vain and materialistic, ‘kimchi girl’ catches the attention for holding a “racial trait”: with kimchi as the quintessential Korean food, the target of blame is thus expanded to all Korean women.
Such nicknames come in handy especially in the Ilbe community, in which there are many feed of users that accuse women of finding a husband based exclusively on his wealth, which for them thus reduces marriage to a business deal in which many Korean men feel impaired. Consequently, this last example once again emphasizes the crucial role that Hell Joseon plays in the frustration and the gender discrimination lamented by young men, whose suffering is sensibly connected to the broken dream of economic stability, in conjunction with  the aforementioned social change.

The mirage of the happy ending

Drawing things to a close, it is reasonable to argue that Hell Joseon must be accounted for as the actual villain of the gender wars’ tale— a villain which needs to be defeated in order to bring these social conflicts to an end. For the sake of stability and improvement of social contentment, it is indeed necessary for the South Korean government to acknowledge the critical issues revealed by such popular slang, and find a solution to the generational frustration and the discrimination lamented by both men and women.
It is interesting to note, however, how the Internet plays an essential role in the development of the gender wars’ phenomenon, to the extent in which it is statistically proven that those who acquire information about feminism using online media tend to be more sexist than those who rely on traditional sources. This suggests to some that the Korean government should take a stronger stance on the regulation of online activity—for instance, by taking action against online bullying and hate speech. The government should also invest in education addressing critical thinking and information acquisition.
On another note, it is likewise imperative that both factions of such peculiar wars move away from gender hostility and find common ground for the communal fight against oppression. As a matter of fact, the antagonization of the male or female counterpart is counterproductive for the achievement of a more just society,  benefiting instead  the preservation of the status quo. Therefore, in expectation of a happy ending, Korean youths shall pull together and move towards a mutual understanding of their experienced discrimination, instead of battling to determine who is ‘the most oppressed of the realm’.