A doctor turned engineer: A portrait of Tetsu Nakamura, Japan’s pride in the world

April 26, 2021
Hailing from Kyushu, Japan’s southernmost island, to the arid landscapes of Afghanistan, Nakamura spent the last three decades of his life sparing no effort in improving the livelihood of rural communities across central Asia—until his life tragically ended in a December 2019 raid. 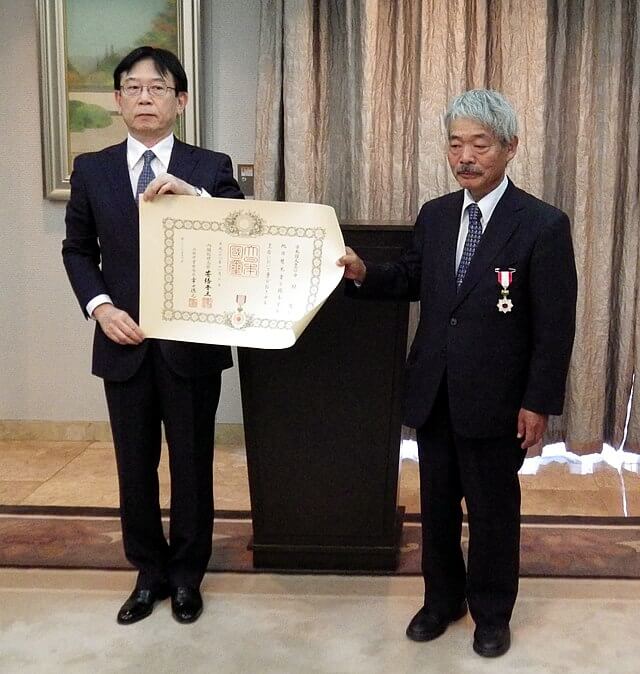 November 2016: Tetsu Nakamura (right) receives the Order of the Rising Sun, Gold and Silver Rays from Japan’s former Ambassador to Kabul, Suzuka Mitsuji. Source: CC BY 4.0 , via Wikimedia Commons
A capable doctor, a creative engineer, a skilled intercultural communicator, an insect collector: Tetsu Nakamura was all of this—and maybe even more.
After dedicating the latter half of his life to help rural communities, first in Pakistan as a doctor committed to eradicate leprosy, and then in Afghanistan as a physician-turned-visionary engineer, Nakamura was attacked on December 4, 2019, gunned down in his car on his way to work in Jalalabad, a city in eastern Afghanistan. He breathed his last while being transported to the US military base of Bagram Airfield, in the northern part of the country.
Kaka Murad, or ‘’Uncle Murad’’ as Nakamura was affectionately known in the country, was a highly-respected and beloved figure in Afghanistan, one who devoted his life to the service of the most vulnerable in a country torn apart by many decades of lacerating internal conflicts. In October 2019, Nakamura was bestowed with honorary Afghan citizenship by the country’s president, Ashraf Ghani, who in a tweet following his death, went as far as defining Nakamura as ‘’the reconstruction hero of Afghanistan’’.
‘Nakamura’s loss is a devastating tragedy, and the entire Afghan nation is mourning his demise’ declared Ghani, expressing his condolences to Nakamura’s family, whom he received in the presidential palace some days after the tragedy. The hashtag #SorryJapan trended in Afghanistan the week following Nakamura’s death, with many Afghan citizens expressing their deepest sorrows for the loss and apologizing to Japan for failing to protect the doctor’s life.

Given the far-reaching impact of Nakamura’s work on the livelihoods of so many, a thorough explanation of the trajectory which led him to relocate from Kyushu to Afghanistan helps us comprehend the man’s values and beliefs–– and gain a closer insight onto his larger-than-life existence.
He was born in 1946 in Wakamatsu, a ward of Kitakyushu City in southern Japan. His family was heavily involved in port work, as his father used to make a living in the salving of sunken ships. His uncle on his mother’s side was the famed author Ashihei Hino, awarded with the Akutagawa Prize, Japan’s most prestigious literary award, in 1937. Nakamura often recalled his childhood spent in his grandfather’s mansion, as extremely happy and sparkling with life.
From his early days in the verdant nature of the Kyushu mountains, Nakamura developed a keen interest in insects to the point that he originally intended to pursue a tertiary education in entomology, at the department of agriculture studies of Kyushu University. After his father opposed this decision, Nakamura decided to enroll in the School of Medicine of the same university and become a physician. Immediately after his graduation in 1973, he landed a job at Hizen Psychiatric Centre, where he was employed as a neurologist.
In an article published in September 2016 in the Japanese monthly ‘Bungei Shunju’, Nakamura brings to mind his experience as a counsellor in the early stages of his career, framing it as “enriching and formative’’:
‘’In that period I spent many days listening to patients affected by depression or schizophrenia. I believe that in counseling the most important rule is to empathize with your interlocutor, accepting their view of the world [...] without imposing your own values. Having black and white certainties in judging what is different from you often causes many problems.’’  [translation by the author]
It was Nakamura’s passion for hiking and nature that eventually led him to abandon a relatively comfortable life in Japan and relocate abroad; an acquaintance at the Fukuoka Climbing Association requested he accompany a small group of hikers to the Hindu Kush mountains, a mountain range stretching through Afghanistan to Northern Pakistan. Attracted by the region’s biodiversity and convinced that he would have enough time to indulge in his passion––collecting insects––Nakamura accepted the offer and flew to Pakistan for the first time in 1978.
According to a biography published by the Ramon Magsaysay Award Foundation, in rural Pakistan Nakamura could witness first-hand the hardships faced by local communities, who were short on basic services and in desperate need for medical attention. Unfortunately, since all the medical supplies on hand were earmarked for the Japanese climbing party, there was very little Nakamura could do to aid them.
This first experience left a deep mark on the man, who six years later in 1984, set out on a mission to combat leprosy in the area around Peshawar, a city in eastern Pakistan in proximity of the Afghan border. The outbreak of hostilities between Afghanistan and the USSR in 1979 resulted in mass migration of a great number of refugees to neighbouring Pakistan. In 1986 Nakamura founded a local NGO, Peace Medical Services, funded primarily by a support group established in his native Japan, the Peshawar-kai (Peshawar Association). He intensified his cross-border activity, soon opening clinics in Afghanistan treating all sorts of diseases including tuberculosis, malaria and dengue fever.
At the turn of the century, a severe drought hit Afghanistan, and the livelihood of over 3 million people became at risk. Over a million people faced starvation because of the inability to grow crops and drink clean water. Realizing that starvation and drought could not be solved through medicine, Nakamura shifted his attention from curing the symptoms to address the fundamental cause of these predicaments. In the beginning, he set about digging hundreds of wells, but soon turned to more systematic solutions. Drawing his inspiration from old Japanese techniques of irrigation, as he explained to the Japanese broadcast emittent NHK in a 2010 documentary, Nakamura began building irrigation canals to transport water from existing water bodies to irrigate dry areas, under the slogan ‘’one irrigation canal over a hundred clinics’’.
Nakamura learned the two languages spoken in the region, Dari and Pashto, and set up a team of local day labourers, along with occasional Japanese volunteers. The team spent over six years constructing what is today known as the Marwarid Canal, in the Afghan region of Nangarhar, which currently provides water across over 16,000 hectares and sustains the livelihoods of 600,000 people in the region. From an inhospitable land, the region saw the return of lush scenery, with over 1,2 million trees.
‘’I love seeing a village that’s brought back to life,’’ declared Nakamura to the NHK in 2010. In October 2019, when Nakamura was named an honorary Afghan citizen by Afghani president Ghani, some people even said that he could have been nominated for the Nobel Peace Prize.

Nakamura’s love for Afghanistan never withered—even when the world started progressively turning its back on the country. International aid to Afghanistan has halved in the last ten years and, according to statistics from the United States Agency for International Development (USAID), in the last five years 193 aid workers were killed. By way of an agreement with the Taliban forces, US President Biden pledged to withdraw the entire American military presence in the country by September 11 this year, affirming that the expedition’s initial goals have been largely accomplished. However, the move is not one without risk, as the US pull-out might furtherly jeopardize the precarious stability reached in the region in the last decade.
Meanwhile, the executive office of the Peshawar-kai continues its aid operations in Pakistan from its headquarters in Fukuoka, Japan, carrying on Nakamura’s legacy of “shining light into dark corners”. At the memorial celebration last December, the Association’s chairman Yutaka Murakami, thinking back on the last twenty years, declared: “At last we are able to see the results of Nakamura’s will”.