The Subtle Humanity of Yazujiro Ozu

Japan
May 17, 2021
The East Asian movie scene is slowly gaining worldwide recognition, but there are lots of older films from the region worthy of your time too. One of the most acclaimed and important Japanese directors is Yazujirō Ozu, active mainly in the late 40’s and 50’s. 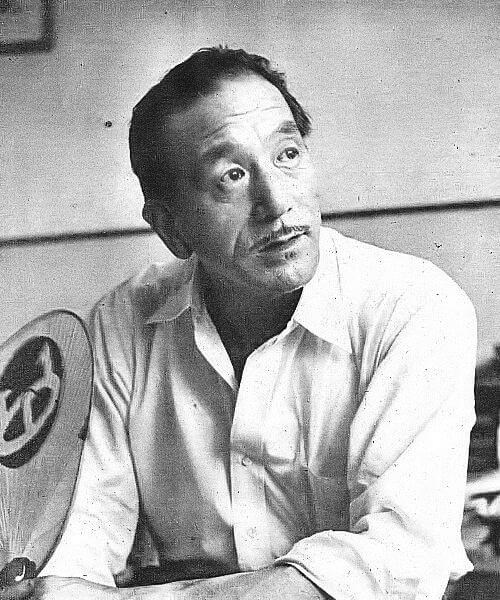 The director himself, Yasujirō Ozu
Source: Unknown author via Wikimedia Commons
Watching Japanese black and white movies from the 50’s might seem like a strange activity for a Friday night in 2021, but the beauty of Yasujirō Ozu’s movies is that they seem just as relatable, relevant and rewarding today as they were seventy years ago upon their first release.
Ozu was a Japanese film director, born around the turn of the last century. His career began with silent films, but eventually he started doing talkies. After the war, he produced his most famous and successful movies, like “Late Spring” (1949), “Floating Weeds” (1959) and “Tokyo Story” (1953). He is one of those people who is quite famous among students and professionals of film studies but virtually unknown to the population at large. In one composite ranking of critics, academics, directors and distributors made by British film magazine “Sight & Sound” in 2012, “Tokyo Story” was ranked the third greatest movie ever made—quite an impressive result to say the least.
Why is this? What makes “Tokyo Story” and Ozu’s other movies so unique and appreciated? Well, there are lots of things that are special about him. For one, he is the polar opposite of an action director. If we take “Tokyo Story” as an example, there is very little in terms of dramatic scenes—in fact, the drama that exists is often purposefully left off-screen. Instead, we get a number of filler shots between scenes, like a fishing boat tugging out to sea, an empty hallway or a shop sign. He does not want to lead the viewer by the hand by showing exactly what happens at a high pace, but relies instead on small nods and hints of emotions. 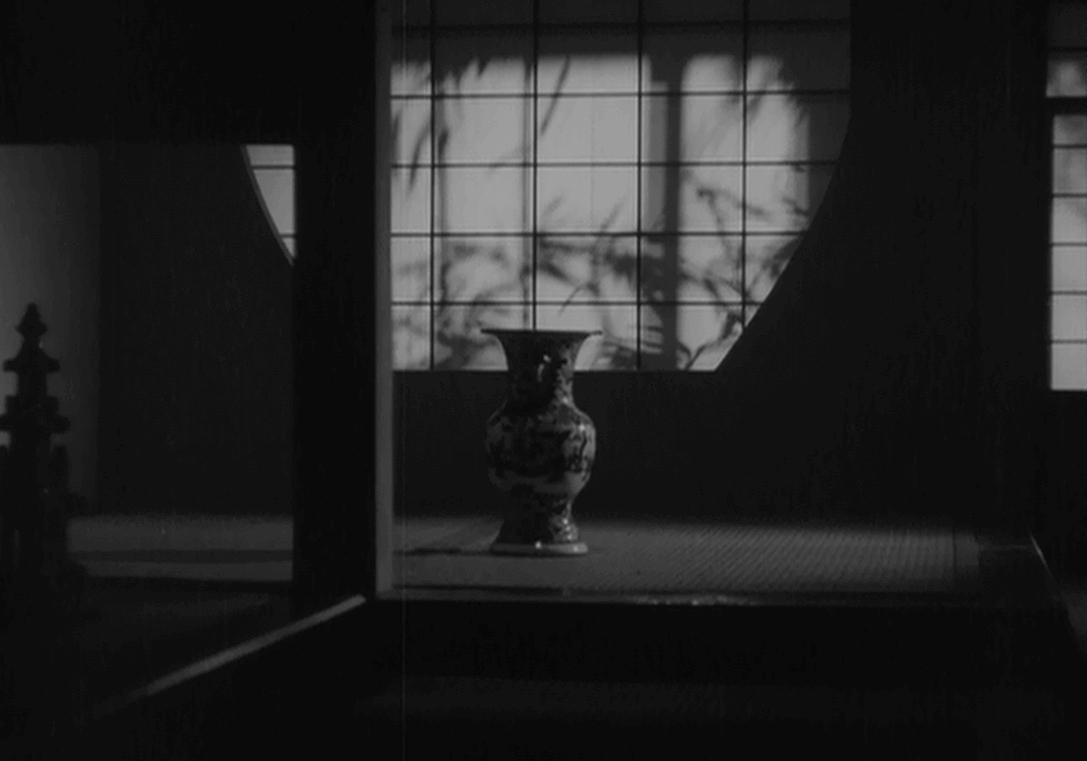 One of Ozu’s most famous “filler shots”, a vase from “Late Spring”
Source: Film Screenshot, Public domain, via Wikimedia Commons
The story is thus fairly uninteresting at a first glance of the storyline: an elder couple goes to visit their adult children in Tokyo, but the children are busy and the visit is not a complete success. The magic of Ozu is that he takes a mundane story and makes it so highly relatable and packed with nuance. You get to see the children’s motivations and excuses, the parents’ soft acceptance of their children’s disinterest in entertaining them and the unexpected warmth that the widow of their middle son shows toward the elder couple.
The acting is conducted uniquely as well. The characters are, for the most part, reserved and collected—customary for Japan in the 50’s. Nevertheless, their distinct personalities, quirks and values are clearly observable in a subtle and intriguing manner. This is further cemented by the camerawork, which incidentally is very reserved, too. In “Tokyo Story”, Ozu only moves his camera once. All scenes except one are done with a static camera, oftentimes lingering on a scene some extra seconds after a character has walked off screen or before they enter a room. It serves to give his movies a theater-like quality, in which the characters get to interact without the meddling hands of the filmmaker.
Another very typically Ozu-esque characteristic is the fact that most indoor shots are filmed from a ground view, with the camera almost sitting on the tatami mats along with the characters. In a way, this allows the viewer to feel included in the conversations and scenes. 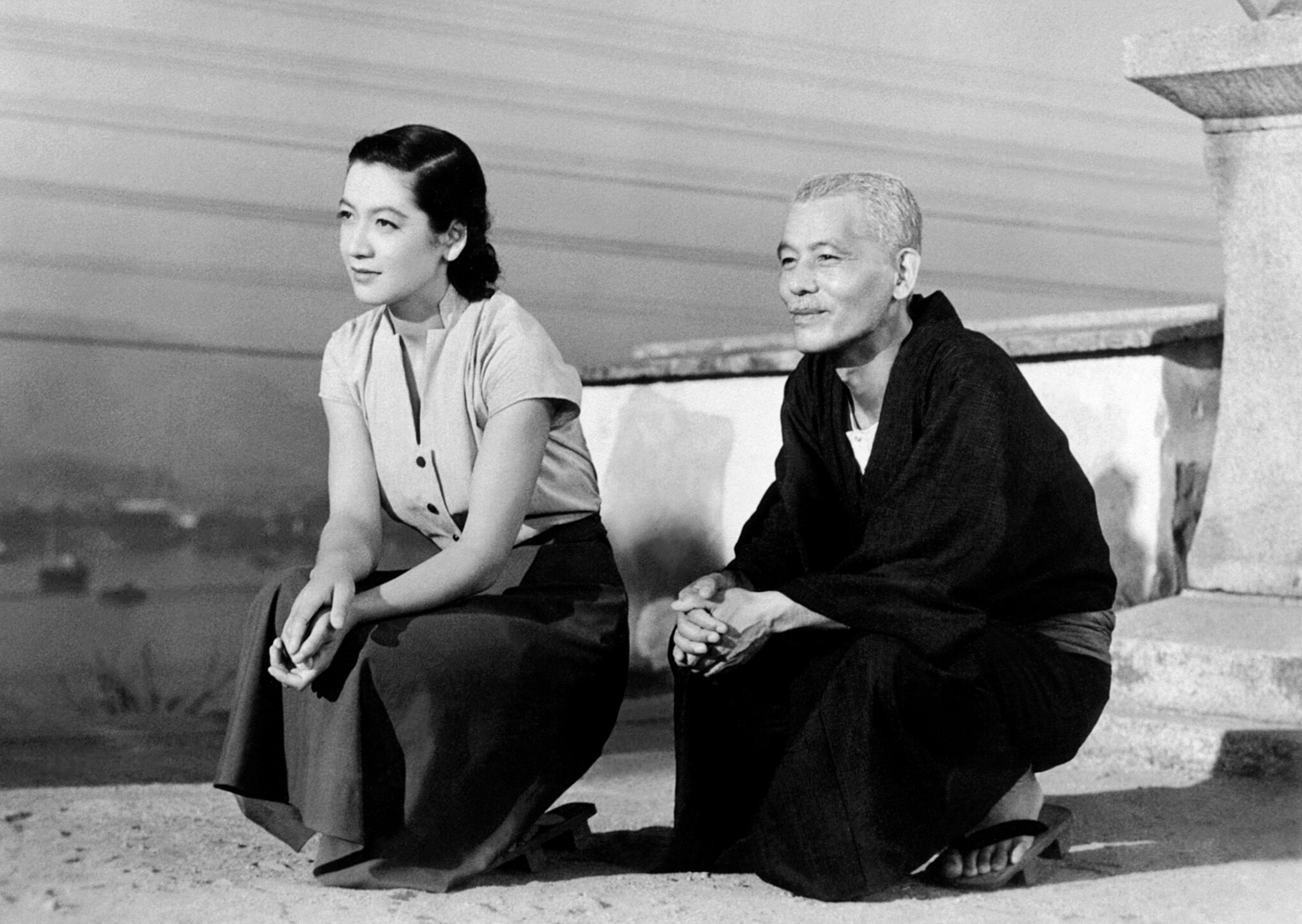 The father and his late son’s widow in “Tokyo Story”, played by Setsuko Hara and Chishū Ryū respectively.
Source: Screenshot of the movie, Public domain, via Wikimedia Commons
For many Swedes, the Asian movie scene has been quite unknown, but this has started to change with the recent successes of films like “Parasite” and “Your Name”. Add in the inherent inaccessibility of its age and it is no wonder “Tokyo Story” is not a household name today. Watching movies this old is often seen as a hobby reserved only for aspiring directors or true cinephiles, but it does not have to be. The human experience is timeless, and a good work of art does not necessarily have to grow antiquated. After all, it is much less likely that people would disregard or overlook “The Great Gatsby”, “Für Elise” or the Mona Lisa on account of its age, so why should old movies be considered so niche? Well, black and white movies are definitely antiquated technology-wise, and it feels more comfortable to watch films in color like you’re used to, but it’s stepping outside of your comfort zone to explore what these older movies have to offer that makes them so alluring.
Many people enjoy travelling and learning about societies and cultures different from their own, and I would argue watching old movies is a wonderful way of doing the very same thing, but from the comfort of your bed or your couch. You get to both visually see and learn about Japan in the 50’s by watching a movie. What in particular makes films like “Tokyo Story” and “Late Spring” so timeless and captivating is their universal depiction of the experience of life, with interpersonal and family relations in the spotlight—something everyone can relate to. A contemporary viewer will, without a doubt, find at least some aspect worthy of their time in Yasujirō Ozu’s movies. And who knows, you might want to explore yet more films from this time period. 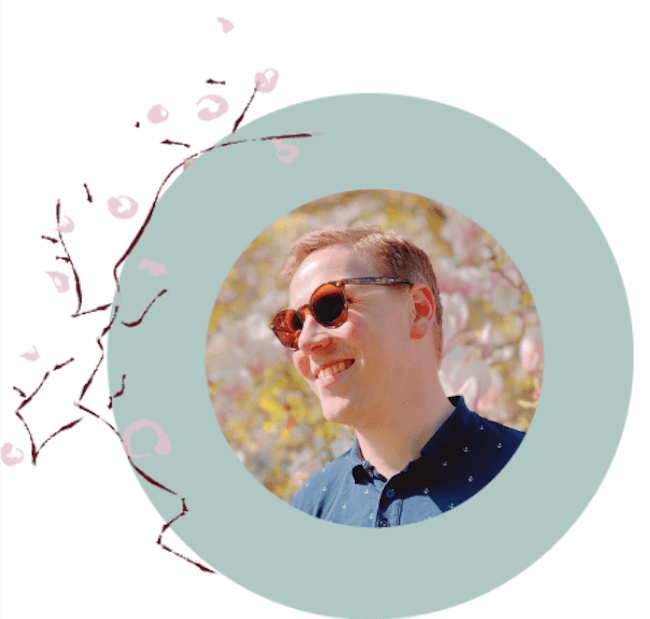 johan andersson
Johan currently studies political science in Lund. He has a great interest in Asian history, culture and old movies, with a specific focus on cinematography.