Vietnam
March 14, 2022
Trade agreements have been praised as a significant contributor to developing countries´ economies and overall national development. Foreign investments help countries acquire the needed capital and technology in order to develop the domestic industry. Hence, when the EU and Vietnam signed a trade agreement, political and economic actors celebrated it as a mutually beneficial deal. However, the trade agreement has only deepened unequal development across the world. 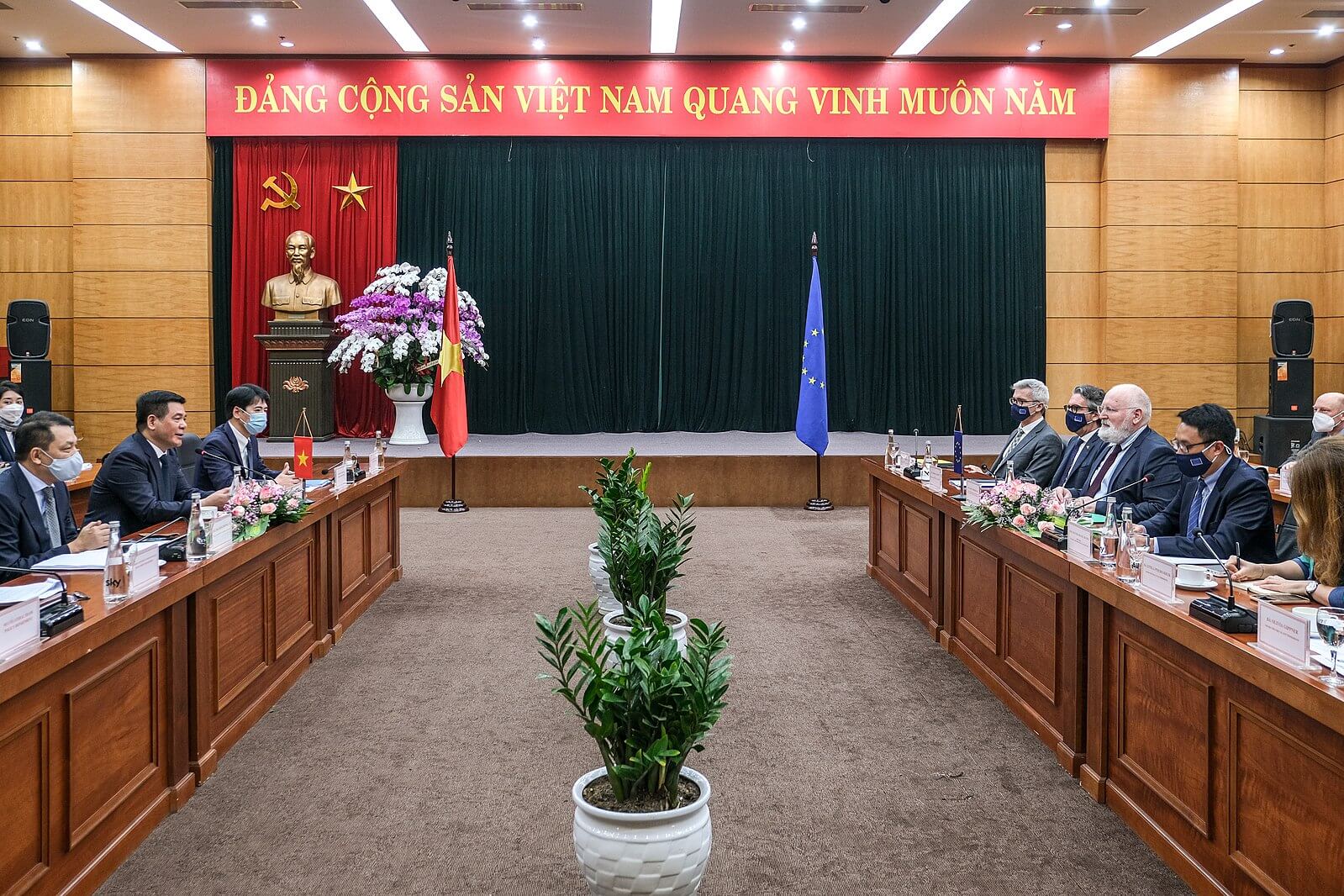 Visit of Frans Timmermans, Executive Vice-President of the European Commission, to Vietnam. Source: Wikimedia.
In 2020, the EU and Vietnam signed a trade agreement aiming to liberalize trade and promote welfare and development. The agreement eliminated 99% of tariffs and opened more sectors for European investment. For example, it improved access for EU companies to the Vietnamese service sector. According to the EU, it is the most ambitious trade deal between the union and a developing country ever. The deal has been presented as a win-win, where European companies get access to an emerging market, and through investments will promote national development and improve labor relations in Vietnam. However, the chances are small that the trade agreement will benefit Vietnam. A trade deal is not an isolated event, but is predicated on a pre-existing network of world trade, which, according to the scholar Robert D. Wade, is uneven and favors the West.

World trade is currently organized around global value chains (GVC) and global production networks (GPC). They constitute “a pattern of regional and global production, coordinated and controlled by transnational corporations (TNCs).” Estimates show that around 80% of global trade flows through GVC/GPC, underlining their significance to the world economy.

Lead firms, predominantly located in the western hemisphere, outsource parts of their production to areas with low wages and lower standards for environmental protection. This fragmentation of production results in a division of labor, where countries specialize in a certain step of production or a specific good. As a result, when Vietnam integrated into the world economy after the adoption of the Doi Moi economic reform program in 1986, it did so by positioning itself in the low-end of the global production networks. Supported by cheap labor and a booming manufacturing sector, Vietnam started producing clothing and electronic products for the western markets, among others, the European. While the country enjoyed high economic growth is has remained unevenly distributed between the export-oriented sector and domestic industry.

This situation is known as a stalled transition, where an export oriented country fails to develop domestic industry. It includes light manufacturing production for the domestic market but also a lack of domestic production networks. As a result, a country cannot fully industrialize. In the case of Vietnam, this has resulted in a lack of domestic production networks as well as a reliance on the domestic service sector. For example, the service sector rose to 43 percent of GDP in 2013 while the manufacturing GDP share lagged at 29 percent. These numbers underline that the service sector plays a bigger role in the Vietnamese economy than the manufacturing sector.

Acceleration of the stalled transition:

It is stated in the trade agreement that the EU is committed to eliminate tariffs on products such as fruit, coffee, rice, nuts and light manufacturing goods such as mobile covers and electronics. The challenge for Vietnam is that these goods are all part of Vietnam's traditional export to the European market and thus the trade agreement does not incentivize a diversification of Vietnam´s export to the EU. If Vietnam wants to remain competitive in the European market, they have to keep producing the same kind of products as they have done since 1986 and mobilize the same actors. Furthermore, Vietnam competes against other Southeast Asian countries. For example, Malaysia exports industrial products (electrical equipment) to the EU, and Singapore exports chemicals and vehicles to the EU. National specialization within the global trade network makes it harder for Vietnam to initiate an industrial readjustment, and move up the value ladder, because other countries have already set up trade networks with the EU within that specific category. Furthermore, with increased access to Vietnam´s service sector, European companies make it harder for local companies to get access to the service sector, because more actors want the contracts, but also due to an asymmetrical power relationship between local companies and foreign companies.

This situation is accelerated by the asymmetrical power relations in global production networks. GVCs and GPNs rest on asymmetries of power, according to scholar Nikola Phillips. She has identified two dimensions of inequality: asymmetries of market and political power. She further argues that lead firms located in the West mobilize their advantages to maintain the current power balance. Market power refers to the distribution of value. The lead firm generates the most revenue, while subcontractors in the bottom of the value chain - as the ones in Vietnam - earn the least. With regard to political power, foreign companies have access to capital, technology and support from Western government. The combination of these three factors make foreign firms powerful but also attractive to Vietnam. In order to attract and accommodate foreign companies, the Vietnamese government has relaxed regulations regarding taxes and land. According to Nikola Phillips, this illustrates how foreign firms utilize their political power to maintain the current structure of world trade rather than using their political power to mobilize local companies and eventually support national In Vietnam. This provides foreign firms with a competitive advantage vis-a-vis local companies, since they have easier access to government contracts and have no responsibility towards Vietnamese companies. Furthermore, observers of industrial production in Vietnam argue that foreign companies rely on their already established value chains when they need components. They do not include local companies in their logistics who miss out on significant revenue.
In sum, the trade agreement itself and the underlining power relations actually work against industrialization in Vietnam. Rather than helping Vietnam intiatite industrial readjustment, as promised, the EU maintains the current stalled transition because of national specialization and foreign firms´ political power.

Trade agreements as a manifestation of uneven development.

In sum, the trade agreement between the EU and Vietnam will probably not support Vietnam´s development, but instead maintain the current unequal relationship between local and foreign companies. Maintaining an unequal relationship slows Vietnam's economic mobility- understood as its ability to move up the value ladder- and will work counter to the EU promise of supporting Vietnam´s national development. Furthermore, it illustrates that Western thinking on developing countries focuses on economic quantity, not quality. There is no focus on how the economic growth is distributed and what sectors it contributes to.The EU is, however, not responsible for how the Vietnamese government mobilizes and allocates resources between the export sector and domestic industry.

If the EU wants to support the Vietnamese domestic industry, it should state that European companies will incorporate local companies into firm's´ supply chains and help Vietnam initiate a proper industrialisation. By doing this, the EU can emphasize the quality of economic growth, which can address the uneven distribution of wealth in Vietnam. 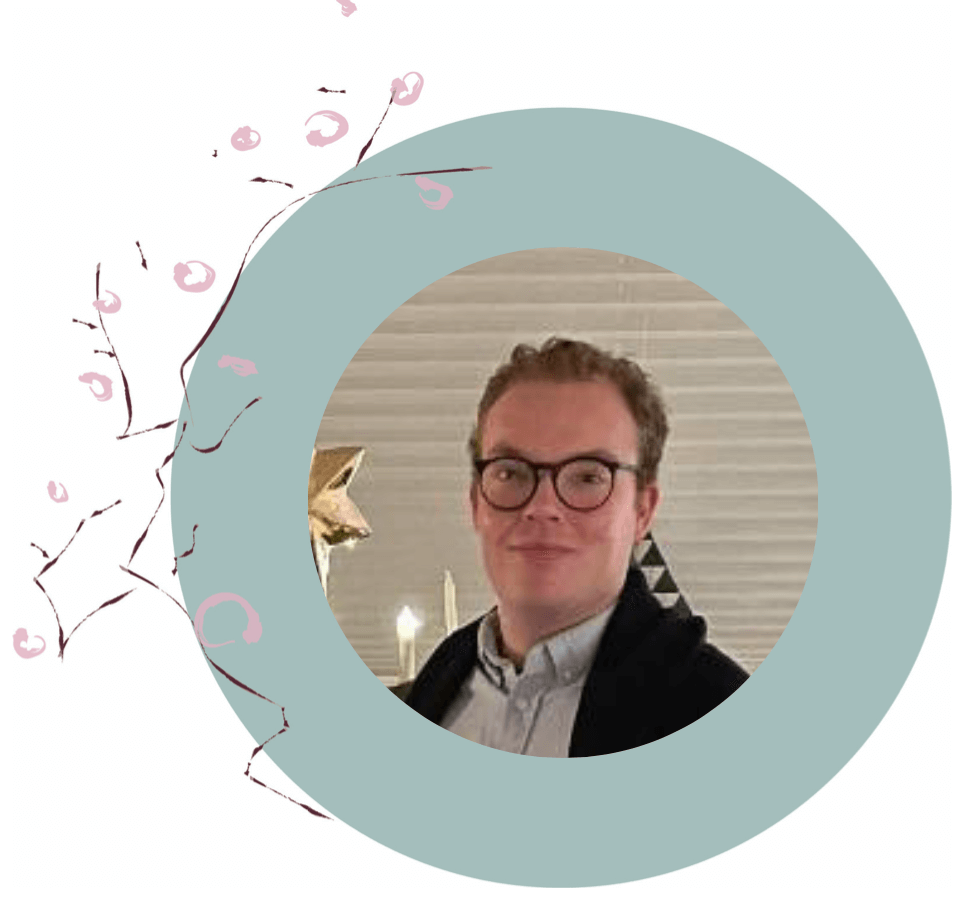 Rasmus Linder Mikkelsen
Rasmus is doing a master’s program in Asian Studies in Lund. His main focus is China and its uneven development. Furthermore, he is interested in the relationship between the party-state and the business sector in China.