China, Vietnam
February 22, 2021
Disruptions such as trade wars and a global pandemic have disclosed the vulnerability and interdependencies along multinational production networks more than ever before. Particularly firms active in China have now started looking into more resilient manufacturing and sourcing strategies and are eyeing Vietnam. A ”China + Vietnam strategy“, however, not only offers new opportunities, but also outlines the limits and dark sides of current modes in global production. 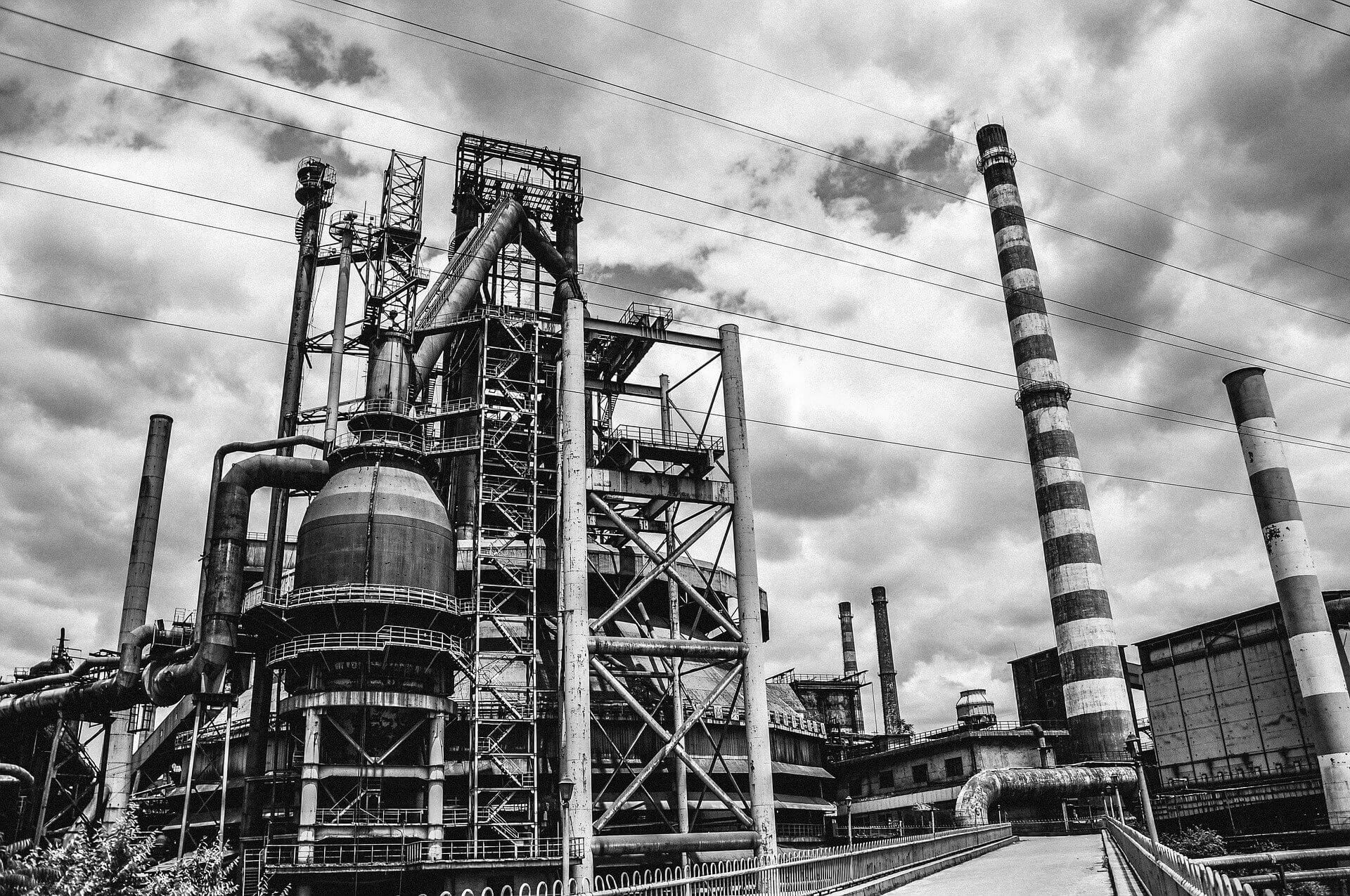 Old Steel Industries in China.
Source: Zachary Zhang from Pixabay.
When we read “x + y”, we either want to complete the equation to “= z”, or we remember our teasing teenage classmates that would write the name of our secret crush and ours in the middle of the blackboard. The “China + 1 strategy”, with a tiny bit of imaginative goodwill, can be associated with both mathematical and interpersonal relations. The term was coined for describing the growing preference of firms active in China to set up their manufacturing plants not solely in ‘the world’s largest factory’, but also in another, business-friendly country. For the latter, Vietnam has emerged as an exceptionally attractive relationship partner.

Counting down the days of China being the world’s largest factory...?

While palpable beforehand, China’s commitment to economic growth and opening to global markets cracked the whip after it joined the World Trade Organization (WTO) in 2001. Through the activation of beneficial domestic policies, heavy state investment and its comparably cheap and abundant labor, firms and investors were eager to set a foot in new, lucrative territories. This applies, above all, to firms looking for affordable manufacturing and sourcing sites. The result: By 2018, China constituted 28% of the world’s manufacturing output. 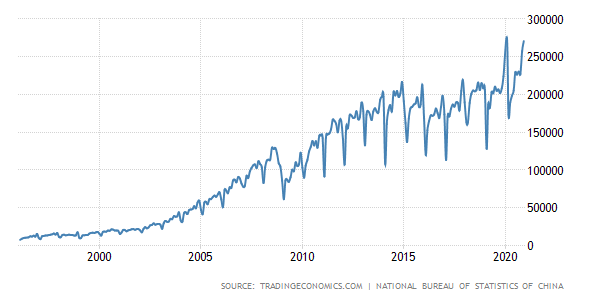 China's Exports of Manufactured Goods in USD Million, 1993-2020 Data | 2021-2023 Forecast.
Source: tradingeconomics.com.
Of course, this is the well-worn story of China’s economic rise. Nowadays, circulating headlines suggest that China’s days as the world’s factory are numbered. Firms are starting to establish new manufacturing plants elsewhere. Perhaps more saliently, they are also moving existing plants to other countries. Such migrations have gained noticeable traction since fundamental disruptions such as the China-Trump trade war, or the COVID-19 outbreak in Wuhan, which used to be a major electronics manufacturing hub. However, signals indicating manufacturing shifts have been appearing before. As the Chinese economy boomed like no other, so too did average living conditions, income levels and individual socioeconomic opportunities improve. Now, rising labor costs and demographic shifts in the course of an ageing society have dramatically reduced the pool of available and ‘affordable’ labor.
Many of these developments are common side effects of a maturing economy. The country's industries, however, take a proactive stance in shaping the observed shift: Initially, China’s export growth was driven by low-cost manufacturing and processing trade, with Chinese factories assembling components made in other countries. As China is looking into the production of its own components and higher value-added products, processing trade industries are being transferred to cheaper locations. This further reflects Xi Jinping’s so-called dual circulation strategy: Next to relying on the external circulation of higher value exports and technologies, China aims at fostering domestic consumption and home-grown innovation to continue its miraculous growth and to reduce the country’s dependence on overseas markets.
To mitigate accumulating risks, ranging from China-US geopolitics and cost pressures to security concerns, firms have started looking into the “China+1 strategy”. The idea: Keep manufacturing plants in China, but add at least one country with lower wages to the sourcing portfolio. However, not only do firms have to evaluate whether the particular manufacturing or sourcing step is easy to move—they also have to weigh up the ease of doing business in the country of consideration. The latter, for instance, can be assessed in terms such as geographical distance, cultural proximity, already existing specialized skills or infrastructure.

Take a chance on me: Vietnam as +1

Vietnam has repeatedly been called out as a major winner of manufacturing shifts out of China. Not only has it become a major hub for export-processing production, but has also seen the largest manufacturing growth from offshoring in the ASEAN region. Industries that have accelerated in particular are footwear, mattress, furniture, textiles and machinery. IT and Electronics industries have secured deals with major players such as Samsung and Intel, while Apple and its partners such as Foxconn and Pegatron are heavily investing in new capacities on Vietnamese ground. With its growing numbers of highly-skilled software developers, Vietnam has also been recognized as a major destination for software outsourcing and offshoring by companies such as IBM and Microsoft, and has even become a major competitor for countries such as India and China. Most important export partners are currently China, the United States, Japan, South Korea and Germany.
The reasons why Vietnam resulted in such an attractive site for manufacturing, apart from it being a neighbor to China, are manifold. From a historical perspective, with its heritage of sophisticated handicraft production, it may have been somewhat predestined. Some name its young and tech-savvy population and the absence of sociopolitical and religious conflict as major factors.
But even more, the government is keen on, or to quote a Vietnamese acquaintance, even obsessed with improving the overall business climate for foreign and domestic firms, and has started to adapt the regulatory, tax and legal environment to support not only the manufacturing business but also overall entrepreneurship and small and medium–sized enterprise (SME)–led growth. In the same line, numerous Industrial Parks and Zones to attract Foreign Direct Investment (FDI) have been in the making. Further, Vietnam is a member of the WTO and partner in numerous bilateral and ASEAN trade agreements, easing the burden of tariffs. And most importantly: labor costs, with low minimum wages and wage inflation, are lower than China’s.
Such conditions and developments, paired with Vietnam’s latest success story in keeping infection rates through the pandemic low, create a hardly surprising result: Vietnam is booming, and is projected to become one of the fastest-growing economies worldwide.
But expansion in Vietnam has its limits, and emerging bottlenecks can’t be overlooked. Availability of talent is already becoming scarce as the country struggles to keep up with incoming firms and investment. The regulatory environment and bureaucratic processes, especially for Mergers and Acquisitions (M&A) activities, a common way of entering Vietnamese markets, is still giving many firms and investors a headache. Infrastructure is also behind as it can barely handle the vast amounts of transport available to promise efficient and timely deliveries, let alone the difficulties in keeping up with electricity demand. Further, local companies have not yet developed the same extensive client and partner relationships that have grown in China, which required building a significant amount of social (and financial) capital over time.

Apart from prevailing bottlenecks, Vietnam’s economy has made tremendous leaps in the course of these manufacturing shifts. That doesn't mean, however, that there aren't darker sides emerging, especially when noting the increase of offshoring activities in Vietnam. Opponents of offshoring criticize its exploitative tendencies as it builds on relocating manufacturing plants to cheaper countries just to sell the goods back to wealthier economies, while often ignoring local workers’ conditions. The tragic story of Foxconn in Shenzen, where numerous workers committed suicide, is a vivid proof of that. One might wonder who will take responsibility for ensuring that this history is not repeated in Vietnam.
Further, numerous new assembly activities in Vietnam now belong to the very same Chinese companies that are being relocated from China—companies that were formerly relocated from Taiwan. Not only will this possibly feed further into socioeconomic unbalanced interdependencies between the two neighbours, but it also leaves us wondering whether Vietnam might become China’s next factory. Further, these manufacturing activities might also move out of Vietnam again once labour costs and technology proliferation in the country increase.
As such, while Vietnam is increasingly participating in global value chains with its production and export sectors, it is notable that it has been struggling with advancing its domestic supporting industries, and has become more dependent on importing components and intermediary goods for both export and domestic consumption. However, the government’s determination to upgrade the economy and climb up global value chains—particularly by fostering domestic business climate and digital transformation—has been stated more than once. How these efforts will translate into the real economy might also depend on recovery strategies in post-pandemic times.
Observed developments demonstrate that sourcing from Vietnam, both for the country itself and foreign firms, holds both major potential and side effects. After all, Vietnam can only absorb a small share of global manufacturing shifts out of China. Apart from its sheer size and working population, it is a matter of fact that China invested for years to craft its competitive advantages, that range from price, infrastructure and knowledge to trustworthy client relationships and increasingly sophisticated technology. Despite geopolitical tensions, supply chain risks and competitive cost pressures, firms will think twice before they go through the separation pain of exiting China completely. China’s unique advantages in terms of economies of scale and scope have so far been—and will continue to be—unmatched.
After all, the story of ‘China + Vietnam’ is one example of a larger trend of the regionalization of supply chains to enhance resilience and diversify risk. In parallel, global textile industries are also looking into Malaysia, Singapore, Thailand, Indonesia, and the Philippines; automotives into Thailand; and Indonesia and semiconductors into the Philippines, just to name a few examples. Certain skills and capabilities, especially to competitive cost conditions, are increasingly only available in the Asian region. And that will continue to influence sourcing and diversification strategies of firms in both aspiring and maturing economies.
So in the end, we’re heading towards a “China + Vietnam + (n+1 countries)” strategy. Maybe not surprising at all, since we knew it before: all relationships are complex.